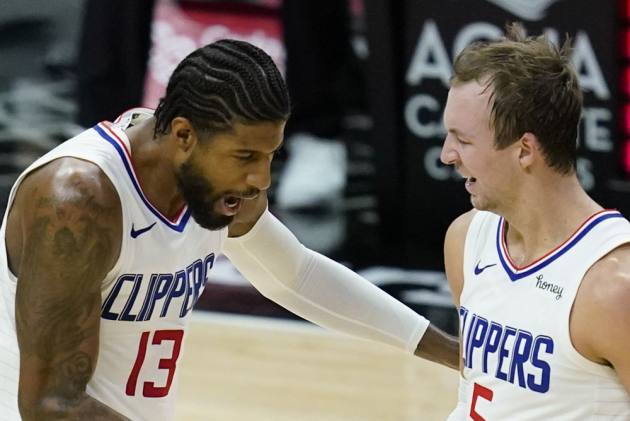 Paul George puts the strange scores in the early stages of the new NBA campaign down to the "crazy turnaround" between seasons. (More Sports News)

The Los Angeles Clippers were embarrassed in a 51-point, 124-73 loss to the Dallas Mavericks on Sunday, only to rebound with an impressive 124-101 defeat of the Minnesota Timberwolves on Tuesday.

In total, there were seven Clippers players to reach double figures for points – Lou Williams leading the way with 20, while George contributed 18 alongside six rebounds and five assists.

The NBA, like most professional sports leagues, was heavily impacted by the coronavirus pandemic last season, leading to the completion of the competition in the bubble in Orlando and meaning 2020-21 was shortened to a 72-game regular season.

George believes the truncated close season means teams across the league are still finding their groove.

"It's still early in the season, I think it's a crazy turnaround coming into this season," George said.

"It's like game four, this would primarily be like pre-season a little bit with this being only game four but we only have seven games under our belt including pre-season.

"So, it's still different, teams working through stuff, still kinks to iron out, no team is in perfect form or close to it right now. I think that's why there's been games with big blowouts."

The Underground GOAT had it goin' tonight. @TeamLou23 earns our @Kia Performance of the Game. pic.twitter.com/mJANRZbwiL

The Clippers had well-documented injury issues last season and were without Kawhi Leonard for the second straight game due to a mouth laceration.

George, though, thinks the roster as a whole is better equipped to cope with such situations.

"I think it's just having a better understanding of one another, being with each other going into year two now it's more of an understanding and knowing guys' tendencies," he added.

"We've kind of picked it up, it's just a familiar group that's out there now, we have to be a man-up team."

Williams' points came from the bench, while Ivica Zubac also contributed 12 as the Clippers' replacements outscored their Timberwolves counterparts 56-32.

Reggie Jackson, who put up 11 for his team, said: "It feels good to get a win after that atrocious loss, we knew that wasn't necessarily who we are.

"Zubac was making their team kind of pay for being a smaller team. He made it easy on us."

Zubac added: "Our coaching staff made a point that in the game against Dallas we had the least paint drives. Our focus was to put the ball on the floor and get into the paint."