Paris Saint-Germain were too good for Rennes as Angel Di Maria's impressed on his return to Ligue 1 action. 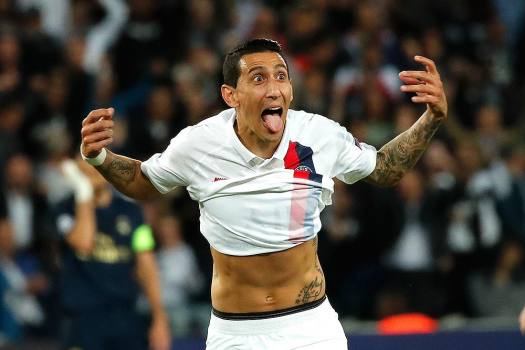 Angel Di Maria made up for lost time in Ligue 1 by scoring twice in a starring role in Paris Saint-Germain's 3-0 victory over Rennes at the Parc des Princes on Saturday.

The Argentina winger was banned for four matches for spitting at Marseille defender Alvaro during an ugly Classique and last featured in France's top flight against Reims on September 27.

But it was his pressing that forced the error from which Moise Kean scored his third Ligue 1 goal and Di Maria added a second after 20 minutes with an audacious chip.

Di Maria added somewhat unfair gloss in the second half as PSG provided a good riposte to a damaging 2-1 reverse against RB Leipzig in the Champions League, although Kean was one of four enforced subs for Thomas Tuchel as the PSG coach's injury list mounted.

Rennes mixed bright play with careless passing early on and it was from one such lax interchange between goalkeeper Alfred Gomis and James Lea Siliki that Di Maria toed into the path of Kean, who drilled expertly into the bottom-left corner.

2 - Moïse Kean is the first Paris' player to score in his first two Ligue 1 home games in Ligue 1 since Dely Valdès in August 1995. Rookie.#PSGSRFC pic.twitter.com/XeqRJYkLRk

Only the post denied Di Maria's excellent long-ranger on the half-volley but the awesome Argentine doubled the lead with a sumptuous piece of skill after collecting Ander Herrera's throughball.

Steven N'Zonzi's aerial prowess caused a couple of nervy moments, while Kean put a free header over the top himself.

PSG did not show a great deal of adventure, though the fact Kean limped off in the 61st minute after Idrissa Gueye, Thilo Kehrer and Alessandro Florenzi had already been subbed perhaps explained a more measured approach.

Instead, Rennes asked more second-half questions without ever troubling the opposition, handball claims against Leandro Parades and Danilo Pereira from the same Hamari Traore cross not interesting the VAR.

But it was game over when Di Maria drifted in from the right and picked out the far corner with a deflected daisy-cutter in the 73rd minute to cap a fine outing.

What does it mean? PSG win again but injuries mount

An eighth straight Ligue 1 win opens up a five-point buffer to second-place Lille, who have a game in hand.  But Tuchel was already without eight first-team regulars including Neymar, Kylian Mbappe, Mauro Icardi, Marco Verratti and Presnel Kimpembe prior to this fixture.

So the sight of Gueye and Kehrer limping off in the first half prior to Florenzi not returning after the break and Kean hobbling away will be a huge concern for Tuchel.

How do you solve a problem like Di Maria?

Often the answer is you do not and that was the case for Rennes here. Di Maria's return was welcome for a PSG side missing so much attacking talent and in total he had two goals from three shots, three key passes including an assist, put in four crosses and completed 20 of 24 passes in an all-round display.

A brace from Ángel Di María and a goal from Moise Kean earns us the 3-0 win!

Gomis and Siliki were culpable of disrupting Rennes' decent opening but at the other end of the field lone striker Serhou Guirassy was largely anonymous. His one shot on target was a weak one and he lost possession on 10 occasions.

PSG return to domestic action after the international break at Monaco on November 20, the same day Rennes welcome Bordeaux.