Pakistan almost threw away the chance of a T20I series victory before Mohammad Nawaz clattered a pair of late sixes to edge out South Africa in Centurion. 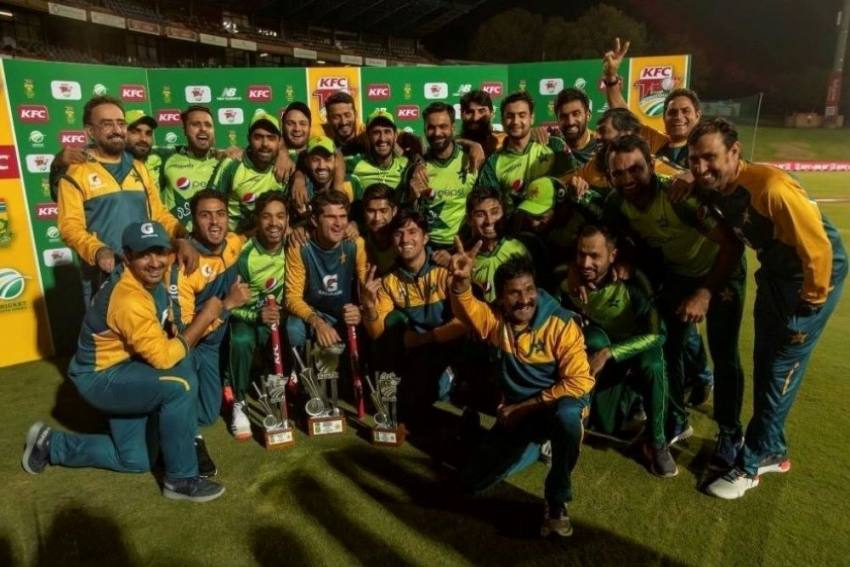 Pakistan sealed a 3-1 triumph over South Africa in their Twenty20 series despite almost matching a wretched batting collapse by the hosts in the Centurion finale.

The Proteas slumped from 109-2 to 144 all out amid a display of artless batsmanship to set Pakistan just a modest victory target, yet the chasing side almost threw away the match with an implosion of their own.

Eventually they won by three wickets with one ball to spare, Fakhar Zaman smashing 60 from 34 balls and Mohammad Nawaz clinching victory with a six when just two runs were required.

Babar Azam's century had spurred Pakistan to a nine-wicket win in the third game of this four-match series, but where that contest, also at Centurion, was a run-fest, with both teams topping 200, this time South Africa were masters of their own downfall.

Aiden Markram came into the match behind three successive T20 fifties, attempting to be only the third player, after Brendon McCullum and Chris Gayle, to make four in a row.

He was the first batsman to be dismissed, however, lbw to Nawaz, and although Janneman Malan (33) and Rassie van der Dussen (52) then put on 57 for the second wicket, there was little other resistance to be found among the South Africa batsmen.

Faheem Ashraf tormented the top order for figures of 3-17 in four overs, while Hasan Ali rebounded well from being carted for 29 in his opening two overs, finishing with 3-40.

In Pakistan's reply, Fakhar came to the crease after Mohammad Rizwan slumped to a first-over stumping, and the left-hander soon set about the home attack, crunching five fours and four sixes before being caught as a wild swipe at Lizaad Williams sent the ball skywards.

His departure triggered the second heavy flurry of wickets in the match, Pakistan sliding from 92-1 to 129-7, needing someone to find some composure.

Nawaz was that man, first punishing Sisanda Magala for delivering two consecutive no-balls in the penultimate over, flogging his second free hit over the ropes. In a nervy final over, Nawaz (25 not out) picked off Williams from the fifth ball, pulling square over the boundary for the winning runs.

A contest littered with chaotic cricket was perhaps best summed up by the first delivery of the ninth over in Pakistan's reply. Tabraiz Shamsi's delivery was short, sat up and called for severe punishment. Even so, Fakhar looked sure to miss out on a boundary as George Linde moved to sweep up inside the boundary. Yet Linde inexplicably failed to get his body in the way of the ball. Really rather poor all round.

While Faheem and Haris Rauf (2-18) kept it supremely tight throughout their spells, the same could not be said for Hasan, who came in for some brutal early treatment. It takes sporting courage and skill to rebound from two horror overs, and he demonstrated such attributes by taking three wickets in his next two sets of six, including that of Magala from his final delivery.