NBA Finals: Just How Influential Has LeBron James Been In Each Of His Four Championship Wins?

Lebron James was a two-time NBA champion with the Miami Heat and again with the Cleveland Cavaliers four years ago, prior to his latest success with the Lakers 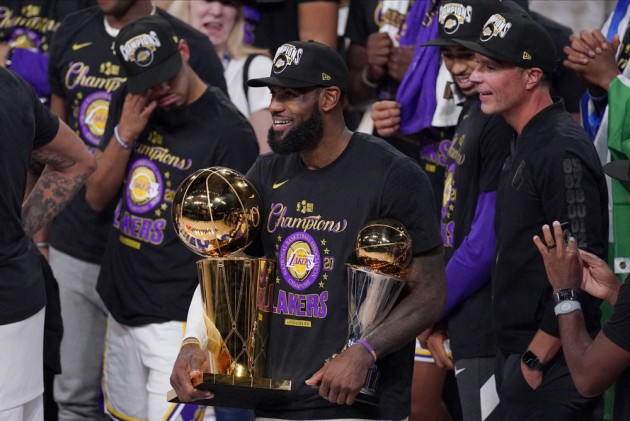 LeBron James is an NBA champion for the fourth time in his career after playing a typically starring role in the Los Angeles Lakers' 4-2 Finals series triumph over the Miami Heat. (More Sports News)

A convincing 106-93 Game 6 win on Sunday earned the Lakers a first NBA title in 10 years, while James became the first player to be named Finals MVP with three different franchises.

James was a two-time champion with the Miami Heat and again with the Cleveland Cavaliers four years ago, prior to his latest success with the Lakers.

It is clear the superstar has been an influence in each of his four championship triumphs, but just how influential has he really been?

We crunch the numbers from each of James' four Finals triumphs to take a look.

“Without y’all’s strength and loyalty, it wouldn’t have been possible.” -@KingJames to the Lakers Faithful pic.twitter.com/CgDZbvS7eM

It was not until his ninth season in the league that James became an NBA champion and it happened in some style as the Heat blew away the Oklahoma City Thunder a year on from losing the Finals to the Dallas Mavericks.

A 105-94 win in Game 1 proved a false dawn for the Thunder and James was already putting his stamp on the series, providing 30 points despite the Heat's defeat.

James really showed his superstar status in the next two games: 26 points, 12 assists and nine rebounds set up a 104-98 win for a 3-1 advantage, while in Game 5 there were 26 points, 13 assists and 11 rebounds in a memorable triple-double.

On average, James put up 28.6 points, 7.4 assists and 10.2 rebounds per game across the series, while he nailed 47.3 per cent of his field-goal efforts and 16.7 per cent of three-point attempts.

A year on and a great rivalry produced a great series as the Heat overcame the San Antonio Spurs in seven.

But it was Game 6 when James really produced the goods, where officials had already brought out yellow tape to block out the court for the Spurs' trophy celebrations.

A fired-up James played the entirety of the second half and overtime as the Heat emerged 103-100 winners, with their talisman putting up 32 points, 11 assists and 10 rebounds – making the go-ahead shot with one minute and 43 seconds of the additional period to play.

He then scored a game-high 37 points in the decider to lead the Heat to back-to-back titles, the only time James has managed this feat in his career.

Throughout the series, James' numbers were 25.3 points, seven assists and 10.9 rebounds per game, while he was 44.2 per cent from the field.

Was this James' finest series win?

With the Cavs trailing 3-1, James led the underdogs to a remarkable comeback against the star-studded Golden State Warriors, who they faced in four straight Finals from 2015 to 2018.

James was the catalyst for putting the Cavs on the board in a Game 3 120-90 blowout, scoring 32 points, collecting 11 rebounds and providing six assists.

Remarkably, he put up 41 points in winning efforts in Games 5 and 6, while a triple-double of 27 points, 11 rebounds and 11 assists in the all-or-nothing decider inspired a 93-89 triumph to help the Cavs win their only series of the four against the Warriors.

With 2.3 blocks, 2.6 steals and 4.4 turnovers averaged per games, James also played his part defensively in a famous success.

After missing out on the playoffs for the first time in 14 years during his first season with the Lakers, James rebounded in style to defeat a familiar franchise this year.

Playing alongside fellow superstar Anthony Davis, the Lakers ended a difficult 2020 – that included the death of the legendary Kobe Bryant and the disruption to the season caused by the coronavirus pandemic – with championship glory.

James was once again series MVP, starting with a double-double of 25 points and 13 rebounds before putting up 33 points in the 124-114 win in Game 2.

One of his best performances over the six showdowns actually came in a losing effort in Game 5 when 40 points, 13 rebounds and seven assists were not enough to prevent a 111-108 defeat.

But it was business as usual in Game 6, a triple-double of 28 points, 14 rebounds and 10 assists contributing to the 106-93 triumph that ended the Heat's brave resistance.

As you would expect, the numbers show James' influence. He averaged 29.8 points, 8.5 assists and 11.5 rebounds.