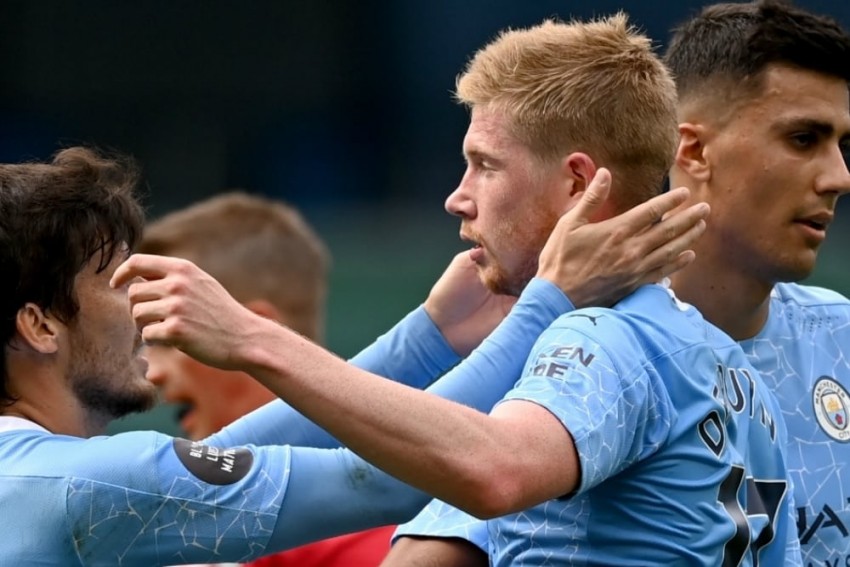 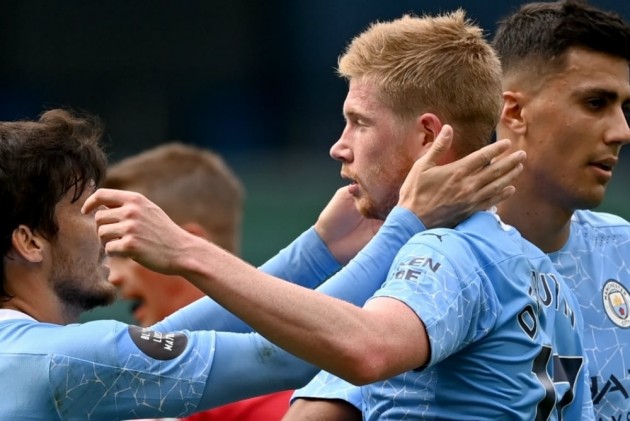 Gabriel Jesus' 22nd goal of the campaign – his best return for the club – preceded a moment of brilliance from De Bruyne, who then matched Thierry Henry's record of 20 Premier League assists in a season by teeing up Raheem Sterling for a third at the Etihad Stadium on the final day.

A greater challenge in the shape of Real Madrid lies in wait as Silva sets his sight on finishing a glittering decade with a Champions League medal.

Onel Hernandez's 20-yard strike being ruled out handed the hosts a reprieve they made the most of 11 minutes in, when Jesus squeezed home after Norwich failed to deal with Sterling's cut-back.

Ben Godfrey made two great blocks to deny Jesus and then Silva as the pressure built but Teemu Pukki passed up a great chance to level when he shot straight at Ederson one-on-one following suspect defending.

Christoph Zimmermann was saved by the post when he diverted De Bruyne's cross towards his own goal but the Belgian brilliantly slipped in Sterling to roll in his 20th league goal of the campaign.

Mahrez stroked home a fourth after De Bruyne pressured Kenny McLean, with the latter the former Chelsea midfielder curling in a wonderful fifth to complete the rout.

What does it mean? Fitting Silva send-off

Silva, who is expected to return to LaLiga, is not just a loss to City but to the Premier League on the whole.

The playmaking wizard will forever be remembered as one of the greatest to grace the league and has four winners' medals in the competition, with two FA Cup triumphs and five in the EFL Cup to boot. It was a shame there were no fans to give him a standing ovation when he was withdrawn late on.

The Belgium star did not quite break Henry's assist record and he missed out of the Football Writers' Association Player of the Year Award to Jordan Henderson, but boy is De Bruyne – who now has 100 Premier League goal involvements – a special talent.

The attacking midfielder terrorised bottom side Norwich and showed magic footwork prior to lashing home a goal befitting of the best player on the pitch and in the eyes of many the league, before scoring his second with exquisite technique.

Pep needs to make case for the defence ahead of Madrid

Man City's performance was almost a microcosm of their season. Dominate, create chances, miss chances, look worryingly exposed at the back.

Hernandez was unfortunate to stray offside for his disallowed goal but the way the hosts backed off was a cause for concern, as was the mix-up between Eric Garcia and Aymeric Laporte that allowed Pukki in.

They lead Madrid 2-1, but Los Blancos will gladly accept any gifts if Pep Guardiola's side do not sharpen up defensively.

Guardiola now prepares his side for the crucial Champions League last-16 second leg against Madrid on August 7. Norwich must get ready for life back in the Championship.