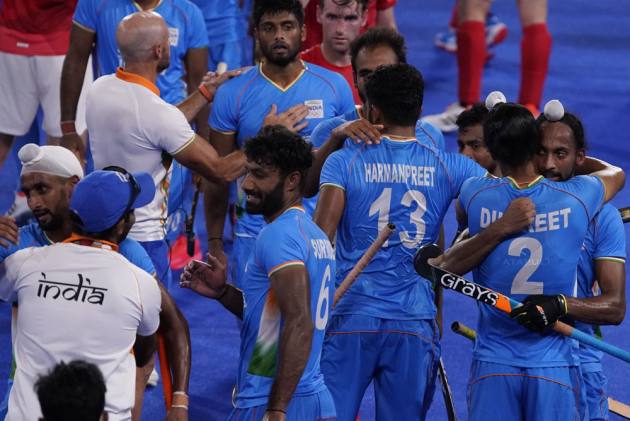 It took more than four decades for India, historically the most successful hockey nation in Olympics, to qualify for the semi-finals. Now, they take on world champions and Rio silver medallists Belgium for a place in the Tokyo 2020 final.

Handling the immense burden of expectations would perhaps be the key when the Indian men's hockey team takes on Belgium, aiming to secure a place in the Olympic finals and with it, a medal for the first time in 41 years in Tokyo on Tuesday.

With 11 Olympic medals, eight of them gold, in its kitty, India has a rich history in the Games and the Manpreet Singh-led side seems on course to resurrect that glorious past.

The Indians achieved the semifinal slot by beating Great Britain 3-1 in the quarterfinals on Sunday, and are now in touching distance of a medal.

India's last of the eight Olympic gold medals came way back in 1980 Moscow Games but there were no semifinals in that edition as only six teams participated in the event.

For a country that gave the world stalwarts like Major Dhyan Chand and Balbir Singh Senior among others, it has been especially painful to watch the hockey teams' Olympic debacles before this edition.

The last time India featured in the semifinals of the Olympics was in 1972 Munich Games where they lost 0-2 to arch-rivals Pakistan.

The Graham Reid-coached current side knows very well that another good outing against Belgium on Tuesday would etch its name in the history books in golden words no matter the colour of the medal.

The Indians are on a four-match winning streak after the 1-7 drubbing against Australia in their second pool match and come Tuesday, Manpreet and his teammates would look to continue the momentum.

But it would be easier said than done as in Belgium, India face a tough opponent, which has improved leaps and bounds in the last few years.

Besides being current world champions and world no.1 side, Belgium are also the reigning European champions.

Going by rankings, however, there is hardly anything to separate between the two sides as India are currently ranked third in the world.

India and the Red Lions played each other three times in 2019 during their tour of the European nation and the Asian side came out victorious in all the matches.

In the most recent outing in March this year, India beat Belgium 3-2 during their Europe tour.

In fact, in their last five matches against Belgium, the Indians have registered four wins.

However, the last time both the sides met each other in the Olympics, Belgium came out 3-1 winners in Rio.

While India finished second in Pool A behind Australia, Belgium were Pool B toppers with four wins and a draw.

Despite having an upperhand over Belgium in their recent ties, come Tuesday the Indians would need to be at the top of their games to edge past the Red Lions, who looked to be on song here.

India captain Manpreet Singh has already cautioned his teammates after the quarterfinal win, saying the "business hasn't finished yet."

"We are so happy because after a long time we are reaching a semifinal. Still, the business hasn't finished yet," he had said.

Before departing for the Games, coach Reid had spoken about mental resilience being the key here in an interview to PTI and that would definitely be now tested more than ever.

And truer words haven't been said.