Five massive NBA games are lined up on Christmas Day 2021 and Indian basketball fans will have a feast watching all of them live on TV and streaming.

NBA has turned Santa Claus! Father Christmas has some good news for basketball fans in India as the world’s top professional basketball league – NBA – has five blockbuster games lined up on Christmas Day 2021. All five games can be seen live on TV and on live streaming. (More Sports News)

In Christmas Day 2021 extravaganza, 10 of the best teams will go head-to-head all of which will be broadcast live in English on VHI and in Hindi on MTV.

Christmas Day 2021 starts with an Eastern Conference matchup between the Atlanta Hawks and the New York Knicks. The Hawks and Knicks met in the first-round of the 2021 Playoffs, which saw the Hawks triumph en route to an Eastern Conference finals berth. The spirited series, which electrified both fan bases, could signal a new chapter in a rivalry between two franchises that have played against each other since 1949.

Hawks vs Knicks will be followed by the game featuring reigning NBA champions, Milwaukee Bucks vs Boston Celtic. This is a reprisal of a historic rivalry, with Boston and Milwaukee’s classic matchup in the 1974 NBA Finals, which the Celtics won in seven games. The teams also played four playoff series against each other in the 1980s, including two Eastern Conference Finals. Back-to-back playoff meetings in 2018 and 2019 and several dramatic regular-season games in recent seasons have given the rivalry a modern spin.

A top-of-the-table Western Conference clash will be up next between the Golden State Warriors and the Phoenix Suns. The Suns went undefeated in November and set the franchise’s longest winning streak, that included a win over the Warriors before Golden State ended the streak at 18 wins. The Suns are the reigning Western Conference champions, a position the Warriors held for five straight years from 2015-2019. 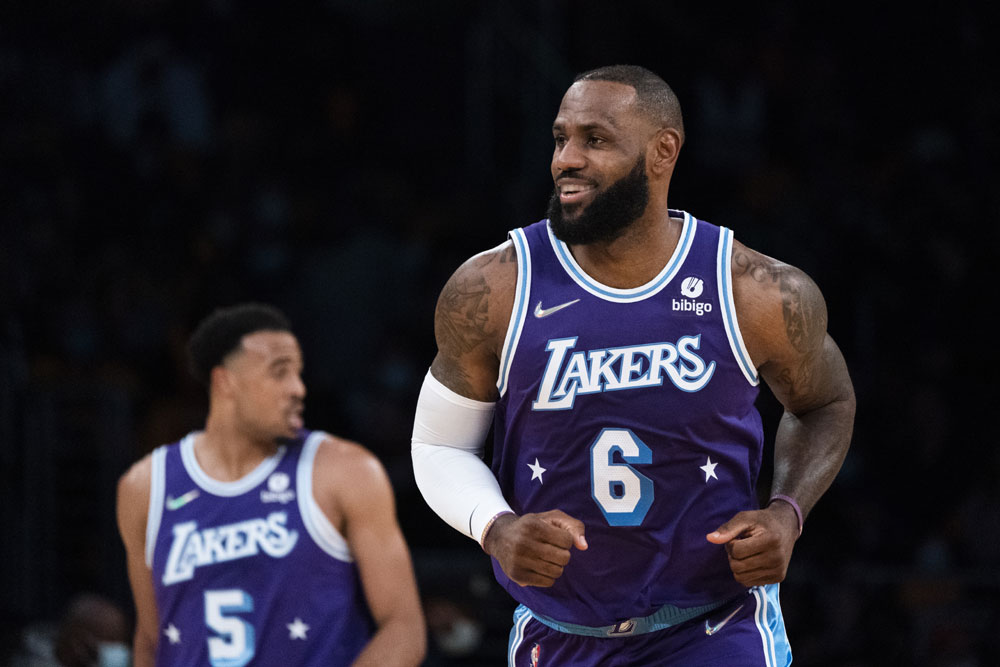 LeBron James (6) will be one of the many superstars in action on a busy Christmas Day. Photo - AP

A super-heavyweight clash between the Los Angeles Lakers and Brooklyn Nets is the penultimate game of this Christmas Day card. This game will see six players that feature on the NBA 75th Anniversary Team in LeBron James, Anthony Davis, Carmelo Anthony, and Russell Westbrook from the Lakers, with James Harden and Kevin Durant from the Nets. LeBron James is poised to become the career scoring leader on Christmas Day, needing 13 points to pass Kobe Bryant for the top spot.

The final game will see the Dallas Mavericks take on the Utah Jazz in a featured matchup of two of the brightest young guards in the league. Luka Doncic and Donovan Mitchell are front and center in this golden age of young talent in the NBA. Both are two-time NBA All-Stars with dynamic games and fearless personalities. Mitchell already has two 50-point games in the Playoffs, while Doncic averages more than 33 points per game in the Playoffs and made an iconic game-winner over the LA Clippers in the Orlando Bubble. All eyes will be on them in a showcase game on Christmas Day – which is just how they like it.

A lot of Christmas Day 2021 records are on the line this year, with LeBron James headed to break the all-time scoring and wins record if the Lakers can triumph over the Nets with James scoring 13 points or more. It is truly the season to be jolly, and the cheer will be spread across the hardwood in these high-stakes games featuring some of the best players in the world.