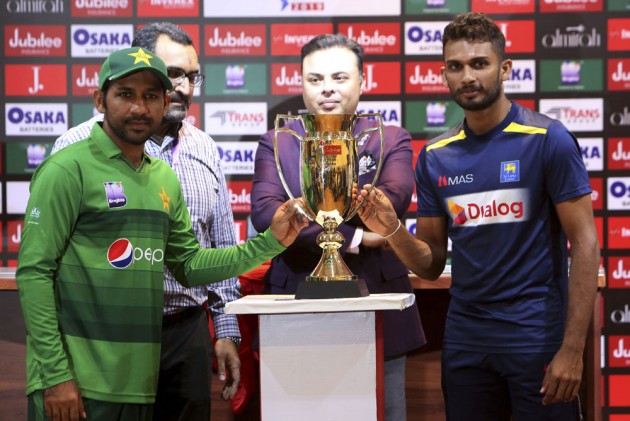 Sri Lanka made a triumphant return to Lahore on Saturday to record of their best T20I wins by hammering top-ranked side Pakistan at their own backyard. An all-round display from the young team resulted in a 64-run win. It will help set up the three-match series beautifully with both the remaining encounters happening here, where the visitors faced a horrific terror attack in 2006. Put into bat, Lankans got off to a flier with Danushka Gunathilaka (57) and Avishka Fernando (33) putting together 84 runs inside the 10 overs. But 19-year-old Mohammad Hasnain took a hat-trick Lankans failed to make the most out of the start. Bhanuka Rajapaksa contributed with 32 runs. Visiting captain Dasun Shanaka used five bowlers, and all of them -- Kasun Rajitha, Nuwan Pradeep, Isuru Udana, Wanindu Hasaranga and Lakshan Sandakan did their job. Iftikhar Ahmed top-scored for the hosts with 24-ball 25. Skipper Sarfaraz Ahmed made 24 off 30. No other batsmen except Babar Azam managed to reach the double figures.

Pakistan, the top-ranked T20I side in the world, are the favourites against Sri Lanka, ranked eighth and without their match-winners like skipper Lasith Malinga and Angelo Matthews. In contrast, Pakistan have got the re-inforcement too. Ahmed Shehzad and Umar Akmal will give the boost in a batting line-up that already has top-ranked T20I batsman, Babar Azam, in their midst. The bowling unit too looks strong, with usual suspects lining up for yet another go at the visitors. Sri Lanka, after losing successive ODI matches in Pakistan, will take the opportunity to test a young brigade with special focus on the World T20, which will happen in a year's time in Australia. They have a very poor record against Pakistan, losing 13 times in 18 meetings, including the last six matches. But the visiting team is a talented lot and can make leave their marks during this tour.

Get highlights and score of first T20I match between Pakistan and Sri Lanka here: