Kerala Blasters showed their fighting spirit to hold Jamshedpur to a 2-2 draw in the 37th match of Indian Super League (ISL) 2019-20 at Kochi on Friday. Catch highlights of KBFC vs JFC match here 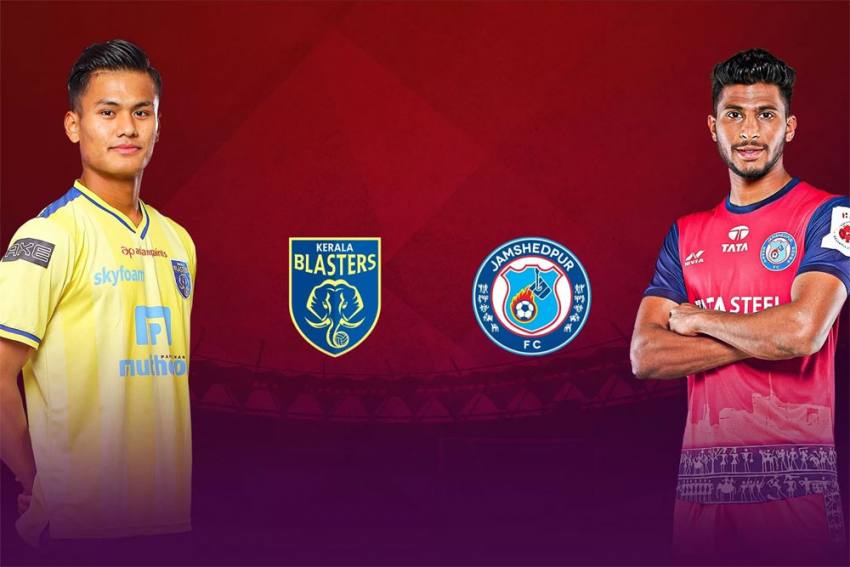 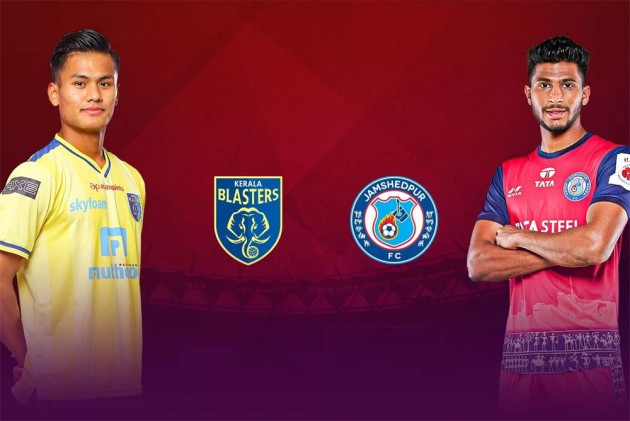 What a game. Late goals from Messi Bouli denied Jamshedpur FC all three points at Kochi on Friday, the 13th. Jamshedpur scored twice from two counter-attacks to take a 2-0 lead , only to see Kerala Blasters' persistence getting paid. A 38th-minute penalty conversion from Piti put the visitors on the top, then sub CK Vineet scored a brilliant goal from a very tight angle. Then it seemed all over for the hosts. But Kerala have a Messi. The Cameroonian hit a brace -- a brilliant header then a stunning penalty kick in the 75th and 88th minute respectively -- to salvage a draw for the hosts. Tomorrow, we have a cracker of a game. FC Goa host ATK.

90+3' - Kerala with a final flurry, but settle with a 2-2 draw. Mighty fightback. Two goals down then their own two in a space of 13 minutes.

90+2' - Meanwhile, Aniket Jadhav is on for Isaac Vanmalsawma. Then, a corner for Kerala.

90+1 - Sahal Abdul Samad one a good run, then goes for a long ranger, with the outside of his boot. Not good enough to breach the Jamshedpur defence.

90' - Three minutes added on as Kerala continue to look for the winners.

88' - GOAL! Messi Bouli beats Subrata Paul, to the side netting as Subrata Paul's dive fails to reach the ball. Some strike.

86' - And PENALTY for Kerala.  Satyasen Irom is brought down by Robin Gurung inside the box. Drama in Kochi.

84' - Messi Bouli tries a long-ranger and a corner as Memo Moura blocks. Nothing comes off the set play. But after few exchanges, Messi gets a brilliant chance. But his header is saved.

82' - Kerala almost pay the price for committing men forward. From a loos ball, CK Vineet launches a counter and sends in a very good cross from the left and it misses his two onrushing teammates.

81 ' - CHANGE for Kerala. This is going to be an all-out attack from the hosts. Samuel Lalmuanpuia replaces defender Mohamad Rakip.

75' - GOAL! It's alive. Messi Bouli finally finds the back of the net. Assist from Sahal Abdul Samad. Brilliant play Sahal to find Messi with a lofted pass. The Cameroonian then beats Robin Gurung and Memo Moura to the ball with a timely jump, and buries his header.

72' - GOAL! Then what, on the counter, Jamshedpur double the lead with a very good finish from CK Vineeth. Against the run of play, Vineeth links up with Farukh Choudhary, the latter returns the ball. Vineeth then beats TP Rehenesh to the near post.

69' - Couple of chances for Kerala inside a minute with Messi Bouli at the forefront. In the latest move, Mario Arques forces Subrata Paul to produce a brilliant stop.

66' - Sahal Abdul Samad, what a CHANCE. The youngster takes a solo run, the takes a shot from the top of the box. But it only gets a block.

64' - And Jamshedpur also get their first SUB. CK Vineeth on, Piti off. The goalscorer is fuming.

63' - CHANGE for Kerala. Prasanth Karuthadathkuni is on for Halicharan Narzary.

62' - Kerala continue to test Jamshedpur defence. Sahal Abdul Samad now leading the hosts' charge. He takes a shot and is headed away by Robin Gurung. Minutes ago, Raju Gaikwad forces Subrata Paul to leave his line to tackle a cross. Messi Buoli gets to the ball from Paul's block.

58' - Isaac Vanmalsawma and Farukh Choudhary in a good play only to see Jessel Carneiro ending the move with a clearance header. On the counter, Jeakson Thounaojam springs to life and finds Halicharan Narzary.

56' - Sahal Abdul Samad, after beating a couple of players, find Seityasen Irom on the right.  But that's all. Jamshedpur win the ball back.

54' - Messi Bouli, who was denied few calls, push a Jamshedpur player (Tiri) from behind is BOOKED. And change for Kerala. Sahal Abdul Samad on for Sergio Cidoncha. The skipper was struggling.

51' - Another brilliant move from Kerala. Messi Bouli gets the ball at the top of the box, and is brought down. No foul given.

50' - What a CHANCE. Halicharan Narzary delivers a brilliant ball for Sergio Cidoncha. The Spaniard takes a moment to measure the angle and goes for the far post, but it misses by a whisker.

48' - A very good run from Mohamad Rakip on the right. But the Kerala defender, in his eagerness, sends in a directionless delivery.

46' - Messi Bouli is late. Tiri is down. And a free-kick for Jamshedpur just outside their box. The visitors then keep the possession.

8:35 PM IST: Players are back for the second-half action.

HALF-TIME | A half of two penalties -- one given, another not. Piti, after missing three games, returned to convert from the spot as Jamshedpur lead at the break. Kerala Blasters started confidently after a horror mistake from TP Rehenesh just inside the first minute. Messi Bouli was brilliant, and in fact, he should have won a penalty at the stroke. Farukh Choudhary, as usual, did all the runnings. Kerala had three shots on target, Jamshedpur's one.

45+2' - What a moment.  Right at the end of the first half, Aitor Monroy brings down Messi Bouli with just the goalie to beat for the Kerala frontman. And no call from the referee. The 12th men are angry. It certainly looks like a penalty. Sergio Cidoncha was brilliant in the build-up, winning the ball back inside their own half, then finding Messi with a beautiful through ball.

43' - Another good play from the hosts. Mario Arques finds Halicharan Narzary on the left flank and gets a return pass. But, again, a feeble finish from Kerala.

42' - On the counter-attack, Farukh Choudhary and Isaac Vanmalsawma burn some pace, but their move is cleared away by Mohamad Rakip.

41' - Good response from Kerala to test Jamshedpur defence. A free-kick and from Seityasen Irom's delivery is cleared by Narender Gahlot.

38' - PENALTY! Massive call from the umpire, and a right one. A penalty for Jamshedpur. And GOAL. Cool finish, just a little dink after sending TP Rehenesh the wrong way. And the culprit, Vlatko Drobarov for bringing down Tiri inside the box while jostling for the high ball from a corner. In the built-up, Seityasen Irom concedes the corner.

33' - A rare sight of Farukh Choudhary committing a foul. Penalised for a foul on Raju Gaikwad. But no card, only a free-kick to Kerala.

29' - Now, Jamshedpur FC are having their best spell. Another long ball, and another chance for Farukh Choudhary. But TP Rehenesh is alert. Good take from the Kerala goalie.

26' - Another chance for Farukh Choudhary. He beats the off-side trap with a brilliant run but TP Rehenesh leaves his line to thwart the Choudhary's move. Meanwhile, Sumeet Passi gets a YELLOW card for a desperate lunge on Sergio Cidoncha.

23' - Best chance of the match so far. Narender Gahlot breaches Kerala defence on the left flank and sends in a brilliant cross. Farukh Choudhary, having back on his feet, just misses a tap-in.

21' - Farukh Choudhary getting medical attention even as Kerala continue to press hard. In the latest move, Jeakson Thounaojam and Messi Bouli combine again.

18' - Kerala still enjoying a majority of possession with Messi Bouli in control of the midfield play.

15' - After a spell of Kerala possession, Jamshedpur find their own move and win a free-kick inside the attacking third. Good delivery from Piti, but Messi Bouli's there to defend.

11' - Messi Bouli once again in the thick of the action. Halicharan Narzary, from the left, finds Messi but the return ball is cut off by Aitor Monroy.

8' - Jeakson Thounaojam wins the ball from Aitor Monroy, and sets up Messi Bouli. But the final attempt fails to hit the target. Over the bar.

4' - Brilliant chance for Mario Arques. Seityasen Irom on a brilliant run on the right flank and sends in a good cross for Arques. But the Arques' header goes straight to the keeper.

1' - Turki Alkhudhayr blows the whistle. Jamshedpur start the proceedings from the centre, and almost goal. Mighty relief for Kerala goalie TP Rehenesh. A long ball to Piti, and his shot gets deflected for a goal-kick.

7:25 PM IST: Biggest news of ahead of the kick-off is the return of mercurial Piti. But the visitors are still without Sergio Castel. Three changes for Jamshedpur.

Last season, they had played out draws - 2-2 draw at Jamshedpur and 1-1 at Kochi.

Players are out with representatives from the blind Indian football team. Kick-off next.

Since winning their season opener against ATK, Eelco Schattorie's Kerala Blasters have been abysmal in the ISL this season, not registering a single win their last six matches. The South Indian outfit have notched three draws and three losses in those six fixtures, and are currently eighth in the league standings. Meanwhile, Jamshedpur FC are fourth in the leaderboard.

Kerala Blasters haven't been able to finish matches after getting into winning situations, only to concede last-gasp goals. In the absence of Batholomew Ogbeche, Raphael Bouli will need to shine for a side with only six goals this season. Meanwhile, Mario Arques is back in training and could feature in the starting XI.

Ahead of the match, Schattorie said, "That (conceding late goals) has to do with the quality that you have in the team. One of the first things in team meetings at my previous clubs, one thing I keep repeating is that there has to be a mindset to have double alertness."

"Last week we had some mismatch during set-pieces. You have to find a solution, in this case, I tell my players to be a bit smarter, a bit meaner, to be street-smart," he added.

Jamshedpur FC have been good this season in terms of tactics and work-rate. The Red Miners are electric on the counter, thanks to the likes of Farukh Choudhary and Aniket Jadhav.

"Kerala are a good team. They have be unlucky in the first part of the season due to factors like injuries. They try to play football, they have a good style. In these kinds of short leagues, you don’t have too much time," he said.