Get highlights of Indians in Tokyo 2020 on Thursday here. There was no medals at stake, only qualification

Apart from a sour note towards the end of the day, India had a good outing at the Tokyo Olympics on Thursday. PV Sindhu moved into the quarterfinals, boxer Satish Kumar beat Ricardo Brown (Jamaica) 4-1 to move to quarterfinals. The biggest news came from the hockey field wherein India defeated Argentina 3-1 to move into quarterfinals. Atanu Das caused the biggest upset of the day as he defeated Olympic champion Jinkyek Oh (South Korea) 6-5 to advance to pre-quarters.  The day however ended on a sad note with Mary Kom eyeing her second Olympics medal losing her women's 51kg category bout. The 38-year-old Kom was up against Colombian Ingrit Victoria Valencia, the bronze medal winner of Rio 2016 and lost 3-2 in split verdict. Meanwhile, pistol shooters Manu Bhaker and Rahi Sarnobat completed 25m Precision qualification. Catch the highlights of the day here:

USA's Caeleb Dressel created a new olympic record in the qualifying with a time of 50.39

India's Sajan Prakash has finished second in Heat 2 with a time of 53.45, Will have to wait and watch if this is enough for him to qualify for the next round. There are eight heats in the event and it looks like Prakash will end up way off the mark.

Round 3 - Mary Kom invites Ingrit Victoria Valencia (Colombia) by dropping her guard and uses it as bait to land some clean punches. Valencia tries to impose herself by closing the distance, knowing well enough she has more power.

One hell of a bout between two mothers. And the split decision (3:2) goes in the favour of Valencia.  It was decided in the first round. Three judges in favour of the Colombian in the final round.

Round 2 - Mary Kom taking the fight on her opponent. She manages to land a couple and Ingrit Victoria Valencia (Colombia) needed her headgear fixed. Mary Kom's hunger and also her technical superiority on the show in this round. And Mary Kom takes the round with three judges in her favour.

Round 1 - A promising start from Mary Kom, but a cagey bout.  Mary Kom, in the blue corner, surprisingly doesn't have India vest. And Ingrit Victoria Valencia (Colombia) takes the first round with four judges favouring her.

This is a clash of two Olympic medallists. Mary Kom had won bronze at London 2012 while the Colombian clinched the bronze at Rio 2016.

Earlier, Zhendong defeated fifth-seed Lin Yun-ju of Chinese Taipei in seven games to enter the final in his maiden Olympics.

Indian sailing pair of KC Ganapathy and Varun Thakkar finished a creditable seventh in one of the two races but still languished at 17th position overall. They ended at 16th in Race 5 before pulling off a seventh-place finish in the next to occupy 17th place out of 19 competitors with 76 net points.

Jiri Liptak of the Czech Republic sets a new Olympic record as he claims gold, ahead of compatriot David Kostelecky and Matthew Coward-Holley of Great Britain.

Solid start by Anirabn Lahiri. The former Asian Tour No. 1 Lahiri had six birdies against two bogeys and was Tied-sixth though many players were yet to finish. The other Indian, Udayan Mane, who made the field of 60 at a late stage, also had a fair start as he 1-under through 10 holes. He was T-30 though his position will change as the round ends.

India vs Ireland Preview & Streaming: after three morale-shattering defeats, it would be a Herculean task for the Indians to lift their confidence and outplay a higher-ranked side like world no.7 Ireland.

Manu Bhaker improved to fifth with 292 points while Sarnobat Rahi finished a lowly 25th with 287 at the end of precision qualification.

Rapid qualification will be held Friday, starting 5:30 AM IST.

Round 2 - Another round in favour of Satish Kumar, with four judges ruling in his favour.

Round 1 - Satish Kumar win the first round against Ricardo Brown (Jamaica) with all five judges ruling in favour of the Indian boxer.

Satish Kumar, in the red corner, and Ricardo Brown (Jamaica) for their bout.

Indian shooter knocks out former Olympic champion Oh Jinhyek in a thriller. Atanu will meet Takaharu Furukawa of Japan on Saturday for a place in the quarter-finals.

Shoot-off to decide the winner.

Manu Bhaker and Sarnobat Rahi are languishing at ninth and 17th respectively.

Atanu wins. And his opponent in the next round is South Korea's Oh Jinhyek.

Another one for India. 8th PC and this time Harmanpreet Singh scores. 90 seconds left in the match.

Scrappy goal to give India the lead. Vivek Sagar Prasad keeps his cool to slot home the goal with a little over two minutes left in the match.

Perfect PC execution from Argentina with Maico Casella hitting the top corner. One PC and one goal for the defending champions with 13 minutes left in the match. But contentious decision to award Argentina the PC.

Argentina growing into confidence but India still the dominant side. India finally get their PC with some four minutes left in the quarter. Argentina, having wasted the referral, get into the defending act. Another PC. And a skier from the drag. On the counter, Sreejesh forces a brilliant save, one-on-one. Then, a referral for body block as India seek another PC.

With a couple of minutes left in the quarter, Varun Kumar converts to give India a 1-0 lead.

Game 2 - PV Sindhu shows her clash in the second game against Mia Blichfeldt (Denmark). 21-13 in 19 minutes. The reigning world champion sails into quarters with a straight games win.

Two very good chances for India in the second quarter, but Simranjeet and Harmanpreet wasted. Argentina also got a chance to test Sreejesh, through a Nahuel Salis strike.

Croatia's Sinkovic brothers, Martin and Valent, win Men's Pair A final to claim the gold medal ahead of pairs from Romania (silver) and Denmark (bronze).

India vs Argentina: Team sheets are out 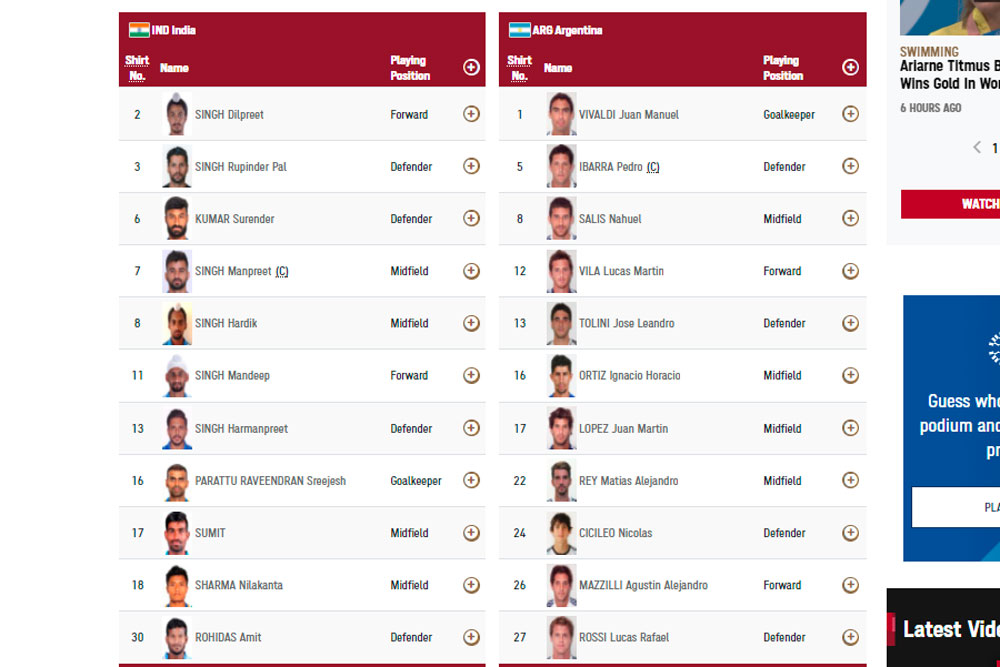 4:57 AM IST: Indian golfer Diksha Dagar will be going to Tokyo as late replacement for South Africa's Paula Reto.

Here's a look at today's medal events, 17 in all

The business end of Tokyo 2020 has started for both PV Sindhu and Mary Kom. The veteran boxer, in her second Olympics after Ri0 2016, will be eyeing a quarterfinal spot in the women's 51kg category. Mary Kom will play against Colombian Ingrit Victoria Valencia, the bronze medal winner of Rio 2016.

PV Sindhu will clash with Mia Blichfeldt of Denmark in a pre-quarterfinal tie. The Rio 2016 silver medallist has a 6-2 win-loss record against Blichfeldt but their last meeting at the Yonex Thailand Open in January this year ended in a defeat for PV Sindhu.

Fresh from wining a gold at the World Cup in Osijek, Croatia, Rahi Sarnobat will lead India's challenge in the women's 25m air pistol competition. She and Manu Bhaker will have to go through two days of qualification on Thursday (precision round) before the top eight are separated after the second rapid-fire round (on Friday).

India's top golfer Anirban Lahiri and rookie Udayan Mane tee off on Thursday. There is not cutoff at Tokyo Olympics and all golfers play all four rounds in groups of three. This is Lahiri's second Olympics after Rio 2016.