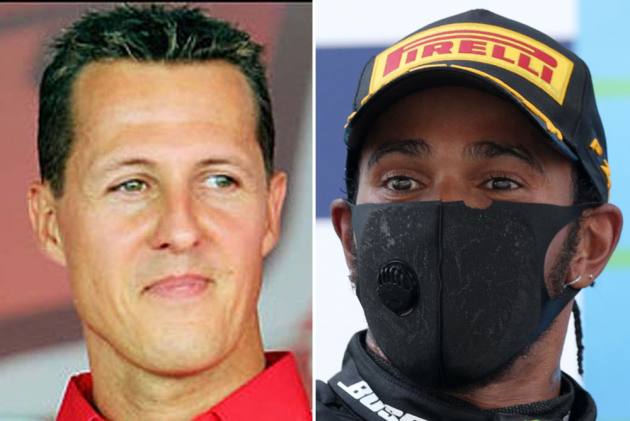 Lewis Hamilton became the driver with the most podiums in Formula One history after claiming victory at the Spanish Grand Prix to make it 156 on Sunday. (More Sports News)

The 35-year-old leads the drivers' standings in 2020 as he looks to match Schumacher's tally of seven world championship triumphs.

Following Hamilton's latest achievement, we look at how their records compare.

He is now clear of Michael Schumacher and is number one on the all-time list #SpanishGP  #F1 pic.twitter.com/LRB8BVUvkA

Both Schumacher and Hamilton claimed their sixth world titles at the age of 34. The German surpassed Juan Manuel Fangio's haul of five in 2002, amid a five-year stretch of dominance that culminated with his seventh crown 16 years ago, while Hamilton achieved that last year with his third straight championship win.

The Briton has already surpassed the German when it comes to securing pole positions – Hamilton has topped qualifying on 92 occasions, compared to Schumacher's 68.

It must be noted, of course, that Schumacher's statistics are somewhat skewed by his three seasons in an uncompetitive Mercedes after coming out of retirement, and this is perhaps most evident when the win ratios of the two drivers are compared.

Taking the pair's careers as a whole, Hamilton averages a victory every 2.9 entries, better than Schumacher, who topped the podium once every 3.4 grands prix.

However, if we discount Schumacher's Mercedes encore, which saw him go 58 races without a win, his ratio improves sharply to 2.75.

He remains clear when it comes to total race victories – Schumacher has won 91 grands prix, compared to Hamilton's 88.

But Hamilton has won more than half the races since the dawning of the hybrid era in 2014 and if he can maintain that rate of success, he looks destined to overtake Schumacher in 2020.