Second straight win for Rajasthan Royals keep them in hunt for spot in IPL playoffs. Highlights of KXIP vs RR here 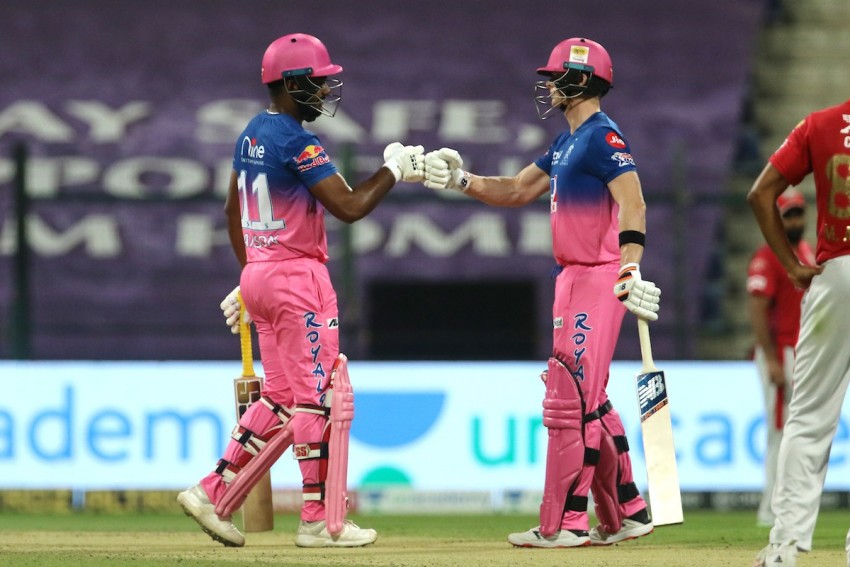 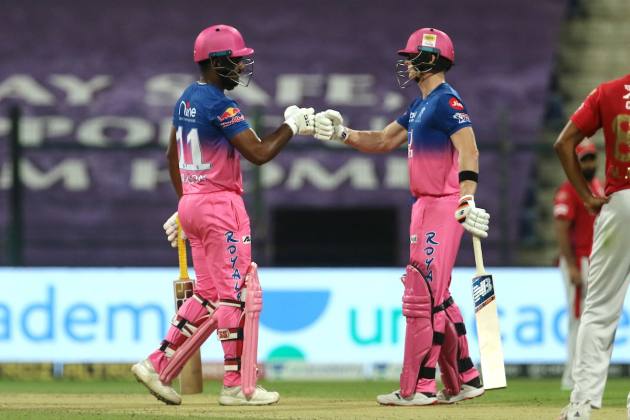 On a five-match winning spree, Kings XI Punjab face Rajasthan Royals in Abu Dhabi on Friday evening. It is a must-win game for both teams as two full points can make a world of difference between qualifying and not making the IPL playoffs reserved for the four top teams at the end of the double-header league competition. KXIP - 12 points from 12 matches - are just two points ahead of RR. Kings are now fourth in the standings while RR are seventh but all that can change very quickly in the final week before the playoffs.

11:02 PM IST: RR Win by 7 wickets RR 185/3 (Smith 31, Buttler 22;  The equation and race to playoffs gets more complicated, Royals stay in hunt, Kings XI are still not out of the race but will be disappointed with the loss.

10:53 PM IST: End of 16th Jordan into this 3rd over RR picked up singles of the first three balls; Jos and Steve need some big shots but have been unable to do so; 4 runs of five balls before Buttler hits A SIX!!!! of the last ball

10:38 PM IST:   End of 14th Jordan into the attack: Samson gets 4 leg byes; RR will take anything now; Arshdeep dives and save a certain FOUR!!! of the 5th ball, RR look Favourite at this stage. Last Ball FOUR!!! by Smith

10:32 PM IST:  End of 13th    Samson is keeping the scoreboard ticking for RR; Ashwin manages to keep 4 balls  on stumps, But Samson dispatches last two for A SIX and A  FOURS!!! Maximum over midwicket; 4 through point; 13 runs of it

10:30 PM IST: End of 12th Bishnoi gets hammered for a FOUR!!! by Smith but manages to keep things tight after that; 7 runs of it

10:10 PM IST:   End of 9th Samson picks Arshdeep for a SIX!!! over deep midwicket; It's not over RR are very much in the game. Arshdeep adjusts his line but concedes a FOUR!! of the last ball 14 runs of it

9:52 PM IST: End of 5th   Shami into the attack; Uthappa takes a single gives strike to Stokes; Stokes creams this one through extra cover FOUR!!!! Shami having liittle effect Fifty UP for RR. Stokes six away from a half-century; 6 runs from the over

9:44 PM IST:   Arshdeep to bowl 3rd; Stokes takes him on shuffles to hit a FOUR through deep midwicket; Stokes makes room Arshdeep follows him. Stokes is smart enough to guide it to through fine leg for FOUR; Single to end the over; 10 runs of it

9:40 PM IST:   End of 2nd Shami into the attack; Stokes has picked up from where he left against Mumbai Indians. Hammers A FOUR!!!! through cover point, Shami now around the wicket to cut the room digs the next one Stokes nearly gets out, Maxwell dives but falls just short at mid-on; Uthappa hits a SIX of an eventful over; 11 runs in this over

9:34 PM IST:  End of 1st over; Arshdeep bowls a good over; This youngman has grown in confidence. Mangages five good balls before Stokes steps out and carts one over mid-on

9:09 PM IST: End of 19th Tyagi come in with Punjab looking for quick runs. Gayle hammers a SIX!!!! 1000 siixes for Gayle; IN 90s now, is century on the cards;  Tyagi bowls a good over consdering the situation

9:03 PM IST: End of 18th WICKET!!!!!! Stokes gets 2nd wicket of the day; Pooran tries to hammer a SIX!!!!, Only finds Tewatia deep at bouandry.Earlier, Gayle splits long-on and deep midwicket for a FOUR!!!; 4th ball GONE for a SIX!!!! Gayle finds the shorter boundary at leg-side tempting clears it with ease; A wicket and 14 runs

8:55 PM IST: Tyagi to bowl the 17th for RR, They need wickets. After a good 5 balls wherein  Tyagi was right on money with his yorkers; misses the length on the last Pooran quick to take advantage SIX!!!!; 11 runs of the over

8:50 PM IST: Varun Aaron has been carted for 2 SIXES!!! Pooran gets into the act for KXIP; 1st short of length hammered over sqaure leg; 2nd one of a free hit over extra cover

8:46 PM IST: End of 15th Stokes gets the breakthrough gives away just 6 runs;

8:38 PM IST: End of 14th Archer into the attack its gamble beacuse this means he has just one over left; RR need a wicket but instead Rahul manages to pick and hammer a slow ball for a FOUR!!!!; Gayle then gets a bouandry of a inside edge between the legs for a FOUR!!!; Gayle the steals double of RR skipper Steve Smith at mid-off (Not a mean feat for 41-year-old) 11 runs of the over

8:33 PM IST:  End of 13th Tewatia  pitches it up marginally and Gayle is quick to pounce; Carts the bowler straight over long-on Ben Stokes tries but the ball sails over his head; 10 runs of the over

8:30 PM IST: End of 12th Stokes manages to bowl a boundaryless over but Kings are racing along and these two-- Gayle and Rahul can change gears and it can be carnage; 6 runs of the over

8:25 PM IST: End of 11th Tewatia gets in firing line Fifty for Gayle: SIX!!!! Gayle reaches milestone in style; 10 runs of the over

8:20 PM IST: End of 10th Tyagi into the attack, a SIX!!! over extra covers; Rahul is getting runs at will; length ball outside off stump, Rahul doesn't miss. Rahul-Gayle have now managed to build a good platform; 8 runs of the over

8:16 PM IST: End of 9th; Rahul Tewatia manages a 2 run over; Nothing fancy just bowling stump to stump and no room; Bowling to field;

8:12 PM IST:  End of 8th Ben Stokes into the attack; Tries knuckle ball trying to decieve Gayle, who edges it past a diving Samson behind the stumps FOUR and 8 runs come of the over

8:06 PM IST: End of 7th Shreyas Gopal into the attack; Gayle is hurting RR and they need to find an answer fast otherwise the game can be easily taken away from them. Gopal manages three quiet balls. Gayle smashes the 4th for a massive SIX!!!!! down on one knee slogged for maximum: Brut Force; 10 runs of the over

8:01 PM IST: End of 6th and POWERPLAY KL Rahul gets into the act; Short ball from Aaron and the form Rahul is in the result can only be SIX!!!!!!. over square leg; A couple of balls later Rahul hits the last ball for a FOUR!!! Punjab take 14 runs from it.

7:42 PM IST:  End of 2nd over Aaron into the attack starts with a wide. Thereafter Aaron manages to pull things back and maintain pressure not giving any lose balls but Chris Gayle manages to hit the last ball for a FOUR!!!!;  8 runs of the over

7:34 PM IST: 0.5  WICKET!!!! Mandeep had little idea where the ball was. A rising delivery 'Bouncer'  takes edge and Ben Stokes pouches it diving from point. Archer started with a yorker (139kmph), Rahul managed to dig it out. By 4th Archer is touching 143kmph. It's only going to get faster

7:05 PM IST:  Rajasthan Royals have won the toss and elected to bowl first

It’s two wins from three at the Sheikh Zayed stadium in Abu Dhabi for Steve Smith’s side and they would look to continue this strong performance in the clash against the Kings. The win against MI would have given the Royals fresh hope and Ben Stokes scoring a magnificent century (107 not out off 60 balls) as an opener will make Steve Smith's team believe in themselves again.

RR's batting line-up has a few match winners. While Smith has been woefully out of form, Jos Buttler, Sanju Samson and Robin Uthappa can turn games on their day. “We are where we are in the table and we can't change that now. We have to win our last two matches it's as simple as that. It is an extremely tight and exciting end to the season and we hope to be one of the teams making it through to the playoffs," said RR coach Amol Muzumdar.

Kings XI Punjab are on a roll. With five straight wins, KL Rahul's team has looked confident. Chris Gayle's presence has not only given some momentum up the order but luck too. The Jamaican has tried to spend more time at the wicket and that's always dangerous for the opponent bowlers. The Gayle vs Archer clash on Friday will be an interesting one.

The first leg clash between KXIP and RR was a high scoring contest in Sharjah. KL Rahul and Mayank Agarwal featured in a 183-run record opening wicket stand as KXIP scored 223 for two wickets. Then RR responded with belligerence. Sanju Samson (85) featured in two major partnerships -- 81-run second-wicket stand with Steve Smith (50) and a 61-run stand with Rahul Tewatia (53) -- to steer Rajasthan Royals to a stunning win with three balls to spare.

"Well Kings XI are a strong team, there is no doubt about that. Since Chris Gayle has come into the fold, they look like a completely different outfit. Rajasthan Royal have to believe in their overseas players because they have got some real talent, possibly the four most talented overseas players in Butler, Stokes, Smith and Archer and they have go out there and play fearless cricket. At the end of the day, if those guys don't win it, Tewatia will," Graeme Swann said on STAR Sports in his preview of the KXIP vs RR match.