Juventus moved back to within seven points of Serie A leaders Inter with a hard-fought home win over Spezia., capped by Cristiano Ronaldo's late goal 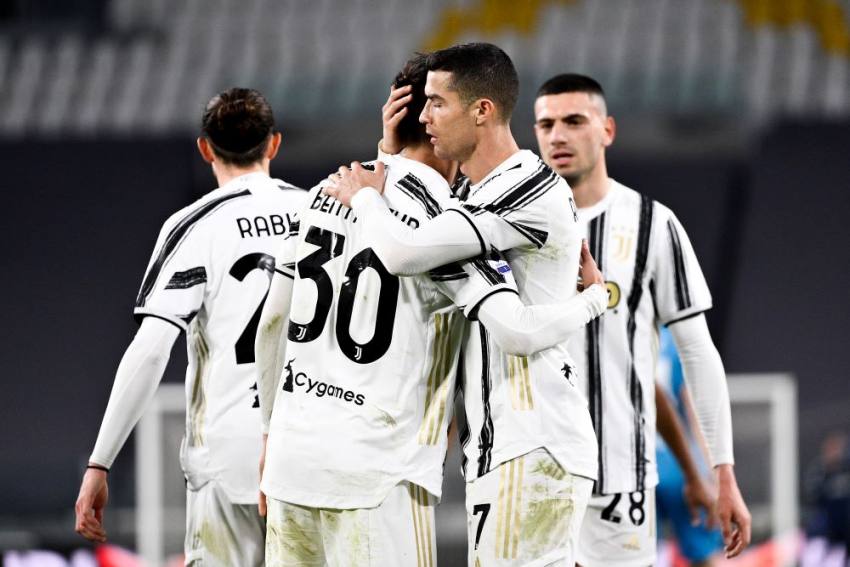 Juventus' Cristiano Ronaldo celebrates with his teammates after scoring a goal during the Serie A match against Spezia, at the Turin Allianz Stadium, Italy on Tuesday..
Marco Alpozzi/LaPresse via AP
Omnisport 2021-03-03T08:35:31+05:30 Juventus 3-0 Spezia: Substitute Alvaro Morata Inspires Serie A Win, Ronaldo Gets To 20 Goals Again 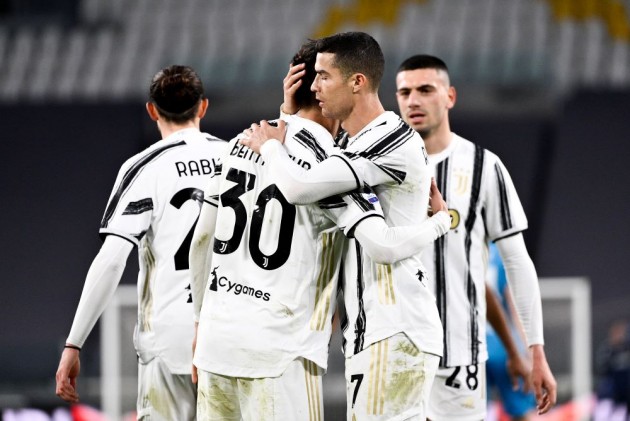 Alvaro Morata scored within a minute of coming on as a substitute to help Juventus to a 3-0 win over Spezia at the Allianz Stadium on Tuesday. (More Football News)

The Spain striker struck just after the hour mark before Federico Chiesa's improvised finish and a late Cristiano Ronaldo strike secured an important three points for the Serie A champions.

Having been held to a draw by Hellas Verona last time out, this was an important match for Andrea Pirlo's men, although they looked far from their best in a frustrating first-half performance.

The introduction of Morata helped to turn the tide as Juve moved to within seven points of Inter and three of second-placed Milan, with Ronaldo's effort making the Portugal star the first player to score 20 goals in each of the past 12 seasons in Europe's top-five leagues.

12 - Cristiano Ronaldo is the first player to score 20+ goals in each of the last 12 seasons in the top-5 European Leagues. Giant.#JuveSpezia pic.twitter.com/UN1LBAwBRc

There was little Juve threat to speak of until Ronaldo, making his 600th career league appearance, smashed a strike off the base of the post three minutes before the break.

The home side's best work was coming down the left, Weston McKennie almost capitalising on a loose backpass and Dejan Kulusevski sending over a cross that Ronaldo could not meet with conviction.

Spezia did not heed the warning and substitutes Federico Bernardeschi and Morata combined from that same position, the latter finishing at the near post and the goal awarded after a VAR review.

With Morata keeping the Spezia defence busy, Kulusevski found Chiesa in the box and, after his initial shot was saved, he expertly hooked in the rebound for 2-0.

Ronaldo was frustrated by goalkeeper Ivan Provedel from a free-kick but soon left the keeper with no chance, netting a crisp finish a minute from the end of normal time.

Wojciech Szczesny did not have a save to make until the final kick of the match, when he pushed away Andrej Galabinov's tame penalty to deny the visitors a consolation.

What does it mean? Juve cling on in title race

A run of just one win in five games in all competitions meant Juve came into this one short on confidence, something that was abundantly clear in their first-half display.

Their improvement after the break was sufficient to move them back to within seven points of league leaders Inter with 14 matches to play.

Spezia are 16th, with a seven-point cushion to the bottom three, although they have played a game more.

There was little life in the Juve attack until the arrival of Morata, whose clever movement allowed him to score the first – a minute after coming on – and create space for the second.

His impact was just the sort that Juventus will need when they try to overturn their Champions League deficit against Porto next week.

Pirlo's starting line-up gave them defensive balance but little by way of attacking flair, and it was only when Morata and Bernardeschi were introduced that Juve started to look a persistent threat.

Given they are playing catch-up in the Scudetto race and trail Porto in the Champions League last 16, a little more attacking abandon from the start of matches may serve them better.

- Juventus have won five of their past seven Serie A games (D1 L1), conceding just two goals in the process.
- Juve are unbeaten in their previous 24 home games against newly promoted sides in Serie A (W22 D2), keeping a clean sheet 15 times in the process.
- Cristiano Ronaldo has found the net in 10 of his 11 matches against newly promoted sides in Serie A, having scored 14 goals in these games.
- Alvaro Morata has scored a goal coming off the bench for the first time in Serie A since April 2016, against Fiorentina.
- Federico Chiesa has scored seven goals this term, only doing better in a single Serie A season in 2019-20 (10 goals).

Juve host Lazio on Saturday, when Spezia are at home to Benevento.