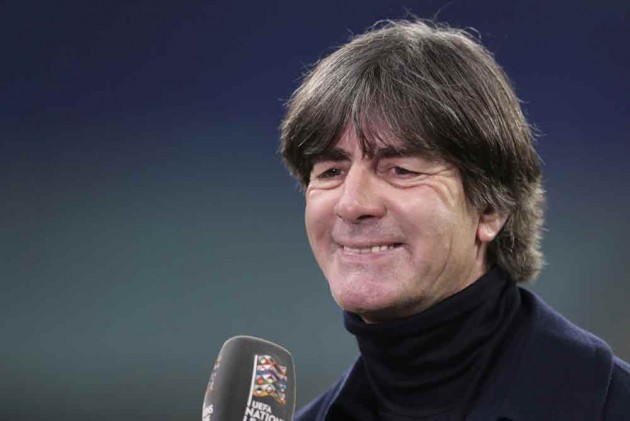 Joachim Low is "immensely disappointed" at the way stories regarding his future were leaked to the press but is convinced he remains the right person to manage Germany. (More Football News)

World Cup-winning boss Low has been under huge pressure following last month's 6-0 Nations League humbling at the hands of Spain.

It was Germany's heaviest defeat since losing to Austria in a friendly in 1931 by the same scoreline and led to rumours that Low, in charge since 2006, was on his way out.

German Football Association (DFB) president Fritz Keller offered his backing to Low in the days after the loss and the governing body last week confirmed he will stay in charge.

However, reports in Germany have suggested Keller tried to convince Low to cut short his contract by a year so that a new coach could be brought in after next year's rescheduled Euro 2020.

Low broke his silence at a news conference on Monday and, while disappointed at what has been said and reported in the past few weeks, he is hopeful of now moving on.

"I would like to put one thing in the right light: I am always open to constructive criticism," he said. "So I was amazed to read and hear certain stuff after the Spain defeat.

"We were all disappointed and angry that we let the fans down in the final game of 2020. The anger is still seething inside me. We don't have the chance to correct the result.

"As always, we immediately started looking ahead. There were also some discussions with the DFB last Monday - it wasn't possible earlier.

"I grew up with the fact that things that are discussed internally remain internal. It has to do with trust and credibility. You can also openly express your opinion.

"But I was very annoyed that a lot of things leaked out after the first press release - by whoever. That disappointed me immensely.

"I also said at the meeting that there were things that had happened that disappointed me. I made it clear to Fritz Keller once again on the phone what I heard about the matter.

"There is nothing more to say about it. But that stays with me. We have spoken out and that is the end of the matter for me."

"I'm not sure whether he actually said that or hinted at it," Low said. "He didn't speak to me personally about it. But of course it's part of his job to think about it fundamentally.

"What happens if...? What are the next steps...? That's why he doesn't have to talk to me about it. That's not a problem for me. I think that's a manager's job.

"As Oliver always said: After the next tournament, a balance will be drawn. Then the association and also the coach have to decide whether the goals have been achieved or not.

6 - Joachim #Löw is only the 3rd manager of the German national team to concede 6 goals in a match after Otto Nerz and Sepp Herberger. Low. #ESPGERpic.twitter.com/VLGic1vWxw

The DFB released a statement a week after the Spain debacle stating Low would be given "time and emotional distance" before a decision would be made on his future.

Again, though, Low was unhappy with the wording of the statement.

"There was a press release that I needed an emotional distance. That was incomprehensible to me. I've been there for a long time and have seen a lot of things.

"I said give me a day and then I'll be available for anything. I was disappointed with that, with some things that got public. Which partly did not correspond to the truth.

"I have once again made it very clear internally that I want unity and trust in things that are discussed internally. I made that clear."

Germany's defeat to Spain brought an end to a 12-match unbeaten run and saw them finish second in Nations League Group A4.

But with preparations now underway for Euro 2020, and with the World Cup 2022 qualifying draw taking place on Monday, Low is readying himself for a busy period.

"I went into last week's meeting knowing the outcome could go either way - yes or no that I'd stay on. If it was to be yes, I wanted it to be with conviction. That was important.

"The defeat still hurts but as a coach you have to ask yourself 'is everything still on the right path?' For me the players want to follow this path. That is the most important thing.

"We have always experienced difficult situations. You learn to deal with it. In any case, we were very disappointed and angry after the 6-0 loss.

"We started to initiate a change in 2019 and are absolutely convinced that we will embark on this path. We knew there would be setbacks and that was factored in from the start.

"There is absolute trust in the players and their performance. Overall, we had a very good year in 2019. We have developed very well. In 2020 the development stopped a little.

"We need players next year that are totally fresh, then we have great potential. If you disregard the Spain game, we are on the right track, which we are convinced of.

"Of course we have to correct things, we also check ourselves. But we are convinced of the red line or the path we are going."