The win lifts Bengaluru FC to the fifth position in the Indian Super League table while Chennaiyin FC, who are yet to score a goal after four games, are at rock bottom 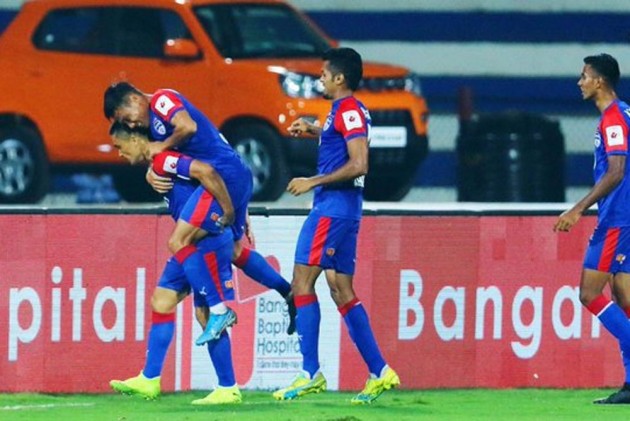 Australian midfielder Erik Paartalu got the ball rolling for Bengaluru with the opening goal (14th minute) before captain Sunil Chhetri made it 2-0 with a sensational strike in the 25th minute. Thongkhosiem Haokip (84th) rounded off a fine victory with a late strike.

The win lifts Bengaluru to the fifth position in the ISL while Chennaiyin, who are yet to score a goal after four games, are at rock bottom.

Bengaluru FC asserted their dominance right from the start, creating several chances in the opening 10 minutes.

Chennaiyin custodian Vishal Kaith was called into action early in the fifth minute when former Chennaiyin man Raphael Augusto did brilliantly to get to the byline and find Juanan with a cutback. The Spaniard's first-time shot was blocked by Kaith with his legs.

Augusto continued to torment his former team and should have scored five minutes later from a Udanta Kumam's cross, but he could not sort his feet out in time.

Kaith then had to pull off another save to prevent Udanta from scoring after being sent through on goal by Chhetri.

Bengaluru's domination paid off in the 14th minute when Erik Paartalu, returning from injury, rose highest inside the box to head home a corner from Dimas Delgado.

Even after taking the lead, Bengaluru continued to maintain control of the game as Chennaiyin struggled to cope up with their rivals.

Not surprisingly, the second goal came in the 25th minute. It was once again Augusto who proved to be a thorn in Chennaiyin's side. His excellent lofted ball from inside his half found Chhetri in space down the right. The star forward beat his marker and unleashed a rasping drive from the edge of the box to beat Kaith all ends up and send the home crowd into raptures.

The defending champions continued to assert their supremacy, displaying swagger and confidence as Chennaiyin looked out of sorts.

After the break, Chennaiyin displayed a bit of urgency and John Gregory sent in Lallianzuala Chhangte for Rahim Ali. However, apart from a header from Dhanpal Ganesh which went wide, Chennaiyin could not trouble their rivals much.

Bengaluru continued to cruise through the game, giving their opponents no chance to stage a comeback.

In the 83rd minute, Chennaiyin almost pulled a goal back when Dhanpal Ganesh tried to flick in a corner from Dragos Firtulescu, but his effort bounced back off the post.

Bengaluru, however, punished Chennaiyin almost immediately. A long ball from Paartalu found Haokip who held off Eli Sabia and scored past Kaith to complete a resounding win.