Since their launch in 2013, Bengaluru FC have won at least one trophy every season and have laid their hands on every domestic trophy they have fought for, including the Indian Super League 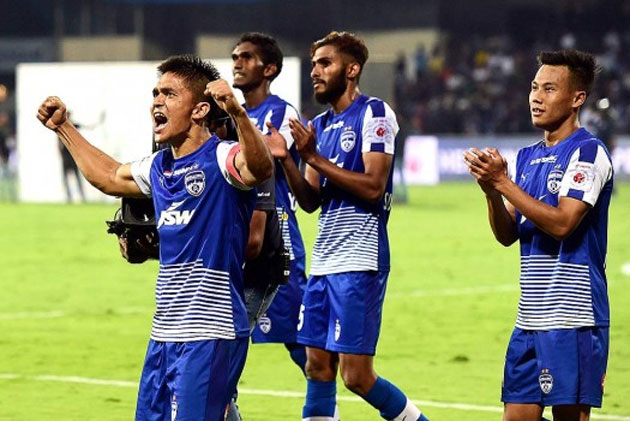 The Indian Super League (ISL) defending champion Bengaluru FC's skipper Sunil Chhetri believes that 'it is his responsibility to lead' the club in the upcoming sixth edition of the tournament.

"When I signed with the club in 2013, I came with the responsibility of leading by example and bringing everything I have to the table in a bid to help the club win trophies. Six years on, nothing has changed. If anything, that role has only been underlined more emphatically," said Chhetri.

Bengaluru FC won their maiden ISL title last year by defeating FC Goa 1-0 in the final. Since their launch in 2013, the franchise has won at least one trophy every season and have laid their hands on every domestic trophy they have fought for.

Since their entry in the ISL two seasons ago, they have set high standards too. They are the first and only team to top the league table and go on to win the final, a feat they achieved last season with a last-gasp winner against Goa.

No team in the history of the competition has successfully defended the title. ATK and Chennaiyin FC failed twice before, but nobody will bet against Carles Cuadrat and his boys doing what seemed unachievable.

"We want to win every competition we are a part of. There's the ISL title to defend, and we know it's only going to be tougher this season. Importantly, we are back in Asian competition and we've shown on more than one occasion that we can compete and do well. We would like to keep giving a good account of ourselves there and challenge for the title," Chhetri said.

Bengaluru have a formidable side this season with the addition of India international Ashique Kuruniyan, former Chennaiyin FC midfielder Raphael Augusto and Spanish striker Manuel Onwu. Chhetri, of course, is their biggest star, and given the form he enjoyed for club and country, it's likely that the story will remain the same.

But, there is many a slip between the cup and the lip. Bengaluru FC would know it better as they lost final 2017-18 final to Chennaiyin FC in at Sree Kanteerava Stadium, their fortress.

Chhetri and company will be on their toes in the upcoming sixth season of the ISL to defend their title. They face NorthEast United in their first game at Bengaluru on October 21.