Ricky Ponting is a worried man. His high-flying Delhi Capitals team has suffered three straight defeats in IPL 2020 and although DC need a win to make the playoffs, the dramatic run of defeats has made him more grumpy. (POINTS TABLE | SCHEDULE)

Delhi Capitals' young captain Shreyas Iyer is worried but not so much. Call it confidence or just arrogance of cricketers of this age, Iyer says the defeats "will not bog Delhi Capitals down." Ponting is more circumspect.

Ponting conceded that chasing is an area of concern DC need to hit the "reset" button to seal an IPL play-off spot in the remaining two league games.

After a flying start, two of DC's hat-trick of losses came while chasing. After Tuesday's 88-run defeat against Sunrisers Hyderabad in Dubai, Delhi Capitals have slipped to the third spot in IPL standings.

"It's been a concern. When we decide to bowl first, we've given away big totals. We have to get better at that, we need to be better at bowling first and at chasing totals because so far, it hasn't worked for us," said Ponting during the post-match press conference.

"We had a rough idea from the start of the game on how many points one might need to qualify. We got to seven wins quite quickly, and now lost three in a row. We have to reset right now," Ponting said.

"We play MI next and RCB in the last match and if we keep playing the way we are, we will find it hard to win those games. So we have to change things and change them quickly," said Ponting.

"It was definitely a big loss, but you can't get bogged down at this point of time. We still have two games. One win is all we need.We have been waiting for that since the last three games. This loss (versus Sunrisers Hyderabad) is definitely going to motivate us," said Iyer. 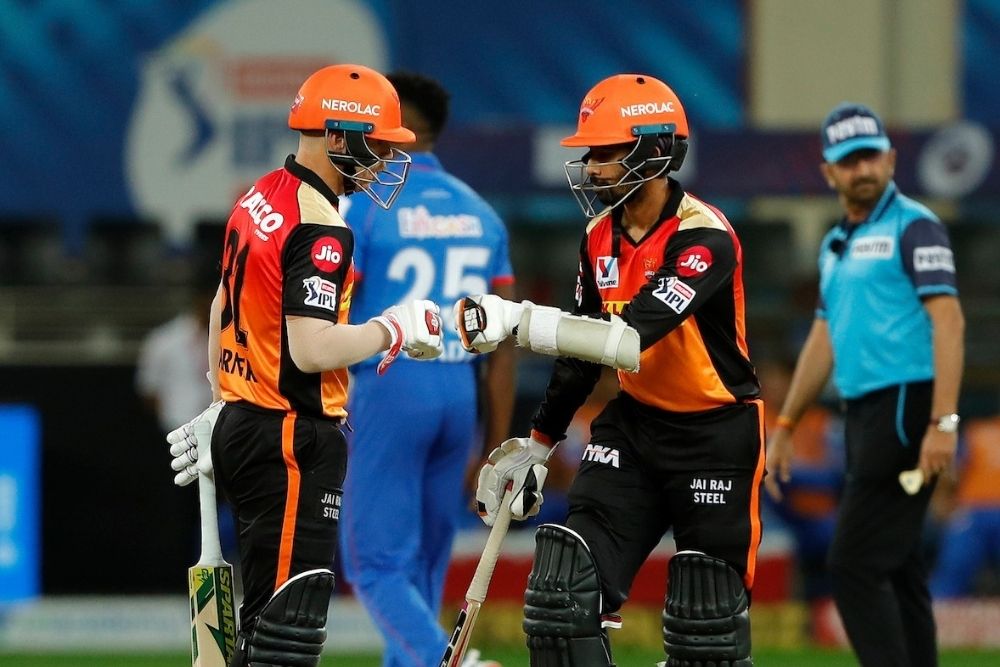 Ponting said his team has failed to bounce back whenever it has conceded an advantage to the opponents.

"As it has happened quite a few times in the tournament so far, when the teams have got on top of us, we've found it hard to drag it back. Today was a great example of that," Ponting said.

"We've got some work to do on our all-round game. Out-fielding has been a bit sloppy and our batsmen have struggled to find any sort of rhythm."

Chasing a mammoth 220 to win, Delhi Capitals had promoted Marcus Stoinis and Shimron Hetmyer up the order ahead of skipper Shreyas Iyer and Rishabh Pant.

Ponting said the idea was to match SRH's score of 77 in the powerplay.

"Chasing 220, with (Ajinkya) Rahane and Shikhar (Dhawan) at the top, we thought if we lost an early wicket, we would have to match them (SRH) in the powerplay and get to 65 or 70," the former Australian captain said.

"Stoinis has been in sensational form so far, he was dying for an opportunity at the top-order. It didn't come off today but it was all circumstantial because we were chasing such a big total. It was a bit of experimentation."

Wriddhiman Saha blasted a 45-ball 87 at the top after he was included in the playing XI in place of Jonny Bairstow, and Ponting said he was "surprised" by the "super knock" by the wicket-keeper batsman.

"We knew that Kane may come back for this game so (Jonny) Bairstow may have to sit out, which meant Saha would have to come back as wicket-keepr. We had a good chat in the morning on how we wanted to play against Saha, and obviously Kane if he batted at no.4," Ponting said.

"Saha played beautifully today. He actually surprised me a little bit. I know he is a dangerous player but to come back after a long time and playing like he did was a super knock. It was the difference in the game."