Change of the guard didn't work for Sunrisers Hyderabad as Kane Williamson and Co lose to Rajasthan Royals. Catch highlights of IPL 2021, match 28 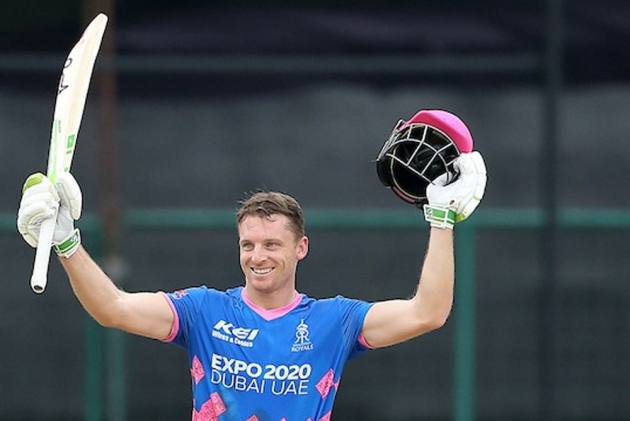 Clueless performance woe compounded Sunrisers Hyderabad's on Sunday after losing yet another match in the Indian Premier League (IPL) 2021. Chasing a target of 221 in Delhi, SRH were restricted to 165/8 to hand Rajasthan Royals a morale-boosting  55-run win. After losing five of six matches, SRH sacked David Warner and installed former captain Kane Williamson as the captain. The Aussie was even ignored for the match at Arun Jaitley Stadium. Then came the thrashing at the hands of fellow strugglers. Mustafizur Rahman and Chris Morris claimed three wickets each. The result means that SRH are stuck at the bottom, while Sanju Samson's RR are out of the rut, overtaking Punjab Kings to fifth place with six points from three wins in seven matches. Earlier, Williamson won the toss and opted to bowl. But his decision backfired as Jos Buttler hit 124 off 64. Samson contributed with 48 off 33. The famed SRH bowling attack failed to make a mark. Bhuvneshwar, making a comeback, leaked 37 runs without success. Rashid Khan was, however, was brilliant as usual. The return leg will be played on May 13 at Eden Gardens, Kolkata. Catch highlights and cricket scores of IPL 2021, match 28 between Rajasthan Royals and Sunrisers Hyderabad here:

Report | Scorecard | Points Table | Full Schedule
7:14 PM IST: Result! A thrashing. Rajasthan Royals beat Sunrisers Hyderabad by 55 runs.
6:49 PM IST: Sunrisers Hyderabad lose plot against Rajasthan Royals in Delhi. Mohammad Nabi became the latest batsman to depart, following Kane Williamson. Second wicket for Mustafizur Rahman. SRH - 129/5 (15).
6:22 PM IST: Manish Pandey (31 off 20) and Jonny Bairstow (30 of 21) added 57 runs in 6.1 overs for the first wicket, then both the openers departed in quick succession, to Mustafizur Rahman and Rahul Tewatia, to leave SRH in a spot of bother. Kane Williamson and Vijay Shankar were looking to rebuild the innings. SRH - 82/2 (10).
5:50 PM IST: After Jos Buttler show, Rajasthan Royals pacers kept Sunrisers Hyderabad openers quiet for four overs. Then, the first six came in the fifth over, a loosener from Chetan Sakariya hit by Jonny Bairstow. Then, almost a wicket -- Bairstow dropped by Buttler, and the ball spilling for a four. Another four. And 16 from the over. Promoted Manish Pandey was taking his time. Before that Kartik Tyagi and Mustafizur Rahman were brilliant in a limited spell. SRH - 30/0 (5).
5:17 PM IST:  Rajasthan Royals scored 74 runs in the last five overs as they race to 220/3.

3:08 PM IST: And as expected, David Warner is not in the SRH XI, along with Jagadeesha Suchit and Siddarth Kaul. Replacing them are Mohammad Nabi, Bhuvneshwar Kumar and Abdul Samad.