Mumbai Indians and Chennai Super Kings captains, Rohit Sharma and MS Dhoni, shared their thoughts on the IPL 2020 -- how the teams and players have prepared for the high stakes tournament 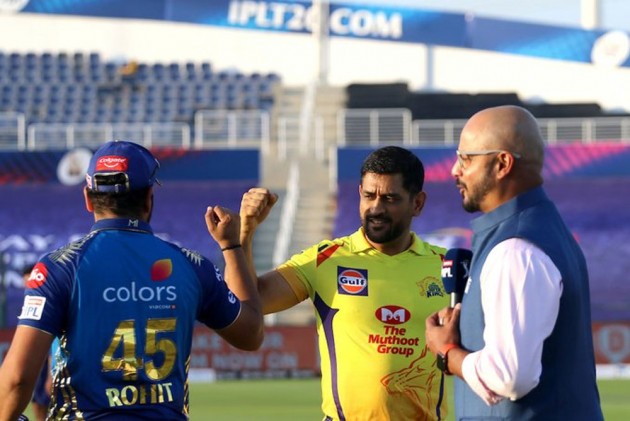 MS Dhoni, the CSK captain, won the toss at Sheikh Zayed Stadium, Abu Dhabi, UAE. At the toss, the former India captain said that CSK are not looking for revenge against MI.

"Being a gentleman's game you don't think about revenge (against MI). You think about the mistakes you made," Dhoni said.

In a sensational final last season, Rohit Sharma's MI defeated CSK by one run to become the most successful team. Both the teams entered that Hyderabad final with three titles each.

Talking about the coronavirus lockdown, Dhoni said, "Have the liberty during lockdown to spend time on yourself to keep fit. Have to applaud every member of the squad. First six days in quarantine is very difficult. Felt each individual used that time well and nobody was disappointed or frustrated. The practice facilities were very good. After the first 14 days it was nice to get out."

CSK were hit hard with several members, including two players testing positive for COVID-19. In fact, that unfortunate development prompted a couple of players to pull out of the tournament.

"Ready to go. Way we've been playing cricket for the last couple of years has been good. All in all we've had good preparation. Now all about execution," he said.

The IPL 2020 has been moved out of India due to rising coronavirus cases. It will be played in three UAE cities - Abu Dhabi, Dubai and Sharjah.