The IPL 2020 in the UAE has been rocked even before BCCI could share the tournament fixture with CSK facing criticism, and Mr. IPL Suresh Raina returning home scared

Hours after Chennai Super Kings (CSK) veteran Suresh Raina decided to pull out of the Indian Premier League (IPL) 2020, reports emerged that other franchises are not particularly happy with the manner in which the Mahendra Singh Dhoni-led side outfit had approached the high-profile T20 league vis-a-vis the coronavirus protocols.

On Saturday, the Board of Control for Cricket in India (BCCI) released an official statement saying that "13 personnel have tested positive of which 2 are players. All the affected personnel as well as their close contacts are asymptomatic and have been isolated from other team members. They are being monitored by the IPL Medical Team."

The official confirmation from the organisers of the tournament apparently did little to assuage the concerns other franchises have. It's also ironic that the BCCI opted not to mention the name of the affected franchise in its statement.

But the world's richest cricket body did try to emphasise it's preparedness, saying it "has put in place stringent health and safety protocols for the Dream11 Indian Premier League 2020 Season, which is scheduled to start from September 19th in the UAE."

And even shared the numbers of tests it has conducted.

"Accordingly, upon landing in the UAE, all the participants have followed a mandatory testing and quarantine programme... Total of 1,988 RT-PCR COVID tests were carried out between August 20th – 28th across all participant groups in the UAE. These groups include Players, Support Staff, Team Management, BCCI Staff, IPL Operational team, Hotel and ground transport Staff," the statement added.

While it is understood that the high-profile event is not under an immediate threat but one franchise becoming a "COVID-19 hotspot" is slowly becoming an issue for other teams as well as the BCCI.

"If there are 13 cases from only one franchise then it is an issue for sure for everyone. The biggest aspect will be whether foreign cricketers will now start being panicky as they are more touchy about these issues," an official said.

Franchises are apparently not happy how, despite all the stringent measures taken, the so-called bubble has been breached and the occupants were compromised. And they want the BCCI to issue at least a warning against CSK.

The three-time champions, at the persistence of skipper Dhoni, conducted a short camp for their Indian players in Chennai, one of the worst-hit metros in India.

Making things worse for CSK are the many photos, of team players without masks and in close proximity to each other, doing the round sin social media.

In fact, there is one message from Deepak Chahar which has attracted criticism. The India pacer, who is one of the two infected players in the CSK camp, was asked by his cousin Rahul, "Where is your mask bro? Social distancing?" And Deepak's reply was: "all have been tested negative bro 2 times and we don't wear mask with family". 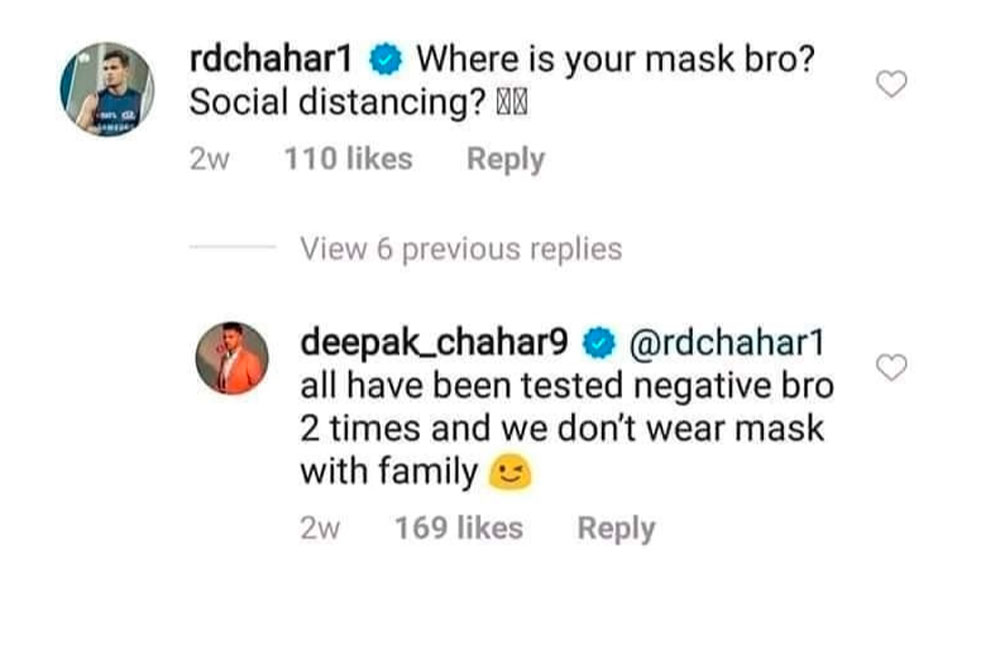 Heartening, considering the team is considered a family. But there is nothing noble about this novel virus.

Talking about the team's five-day camp, CEO Kasi Viswanathan said, "When we announced the tournament is going to happen, I had reservations about conducting the camp here because the bio-bubble had to be created. In fact, sent a message to him (asking) whether it will be worthwhile having a camp for 5 days before going to Dubai. But the captain was crystal clear in his thoughts."

Now, assumptions are being made that the first virus contraction was made in Chennai, and spread in the team which maintained little social distancing norms.

The situation might have already gone out of control. One good example is Raina's case.

Consider this: Dhoni and other members of the team tried ‘calming’ Raina down but the former India all-rounder decided to return home. And the 33-year-old southpaw, considered a true team-man, was afraid.

"On Friday night, in fact, there was a huge ruckus. He tried calling all his teammates, coach Stephen Fleming, skipper MS Dhoni again and again to share his concerns. MS, in fact, also tried explaining things to him but nothing worked. He was badly psyched up and worried. Eventually, everybody else realised there was no point holding him (back) from travelling back because he [Raina] was totally gripped by fear,” TOI reported.

Everything that has happened with CSK, an outfit known for its resilience, reminded everyone that, as former India opener Aakash Chopra wrote "... it does serve as a significant reminder of the times we are living in. The sanctity of the Bio-secure bubble can never be overstated."

Now, the question is, has IPL's bubble burst?

The tournament starts on September 19, and last season's runners-up CSK should feature in the opener against defending champions Mumbai Indians.