Asamoah Gyan's Indian Super League (ISL) debut ended in a whimper in the pouring rain as visiting NorthEast United played out a goalless draw at defending champions Bengaluru FC's home ground. Get here highlights of the second match of the ISL 2019-20 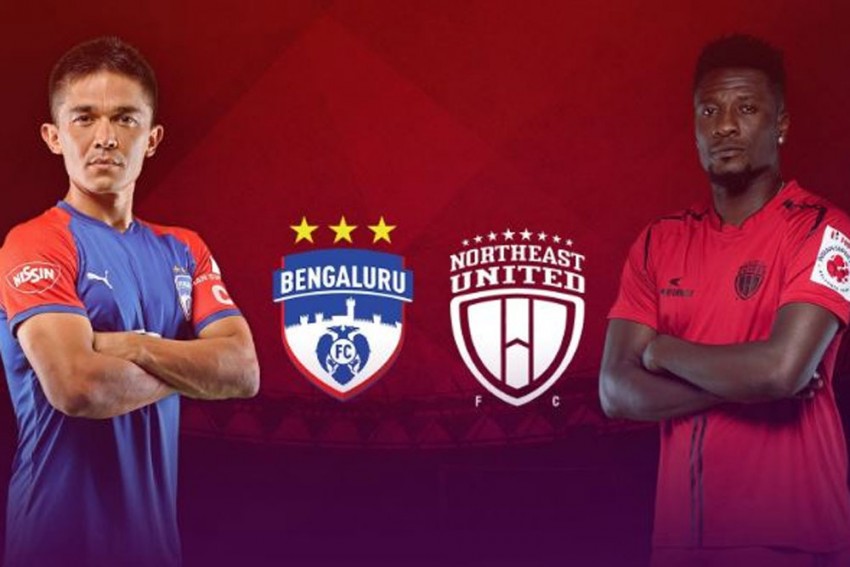 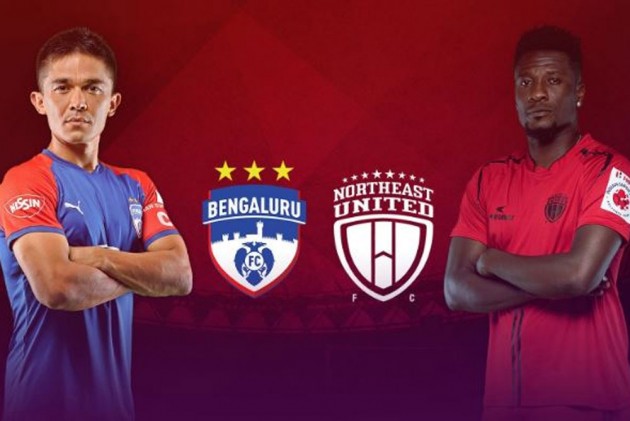 It was supposed to be a cracker of a game, but ended up the poor advertisement of Indian Super League (ISL), especially after the thriller on an opening day between Kerala Blasters and ATK at Kohli yesterday. Early season rustiness can be blamed for the lacklustre display from either side, and also the pouring rain which slowed down the pace of the game. A fair result, so to say. Indian fans expected Asamoah Gyan, the Ghanian legend, and their own 'skipper' Sunil Chhetri to shine. Instead, the likes of Martin Chaves, Raphael Augusto, Dimas Delgado, Nishu Kumar, etc. who stole the limelight. Gyan did manage to score a disallowed goal, then hit the crossbar to impress upon his fans. But that wasn't enough, and will not be enough. By the way, Brazilian Augusto was adjudged man of the man.  That's all for tonight.  Tomorrow, Jamshedpur host Odisha, formerly Delhi Dynamos.

Get here the highlights of the ISL 2019 match between Bengaluru FC vs NorthEast United:

90+4' - Corner for Bengaluru and NorthEast United defend. That's all. A fair result.

90+3' - A long throw-in for NorthEast. From the counter, Sunil Chhetri tries a cycle kick, and almost takes off the head of Martin Chaves. Deemed a foul.

87' - Eugeneson Lyngdoh quickly into the thick of the action. He needs finesse, though. A free-kick for Northeast, and Martin Chaves delivery, targeting Gyan, get blocked by his own team-mate near far post. Wasted chance.

86' - Asamoah Gyan tries to chip from a Gurpreet Singh Sandhu. Hopeful, at best, even for a legend. Gurpreet is no novice.

81' - Udanta Kumam almost wins a penalty. But the NorthEast United defender gets to the ball first. And Sunil Chhetri involves in a heated argument with Highlanders. SUB. Harmanjot Khabra replaced by Eugeneson Lyngdoh for Bengaluru.

77' - Nishu Kumar once again on a solo run, but he fails to control the delivery. Ends up giving an easy catch to opponent goalie.

73' - First SUB of the match. Experienced campaigner Milan Oinam is on for 21-year-old Lalthathanga Khawlhring.

71' - Raphael Augusto is on the ground. He surely felt hard done by the referee to let the play one after taking a tackle from behind, by Redeem Tlang. Hope, it's not his ankle.

69' - Udanta Kumam's blistering pace on the show in the run. He then links up with Raphael Augusto. But the Brazilian fails to return the ball.

67' - NorthEast win a free-kick, and a dangerous delivery from Martin Chaves, but none of his team-mates fail to reach to the ball.

65' - First yellow card of the match, for Subhasish Roy, moments after that wonder save. For time-wasting.

64' - Smart play from Dimas Delgado, to draw a foul from Reagan. A free-kick at a dangerous area. Low delivery and from the clearance, Nishu Kumar drills a rocket. But Subhasish Roy is upto the mark. Palms away for a corner.

62' - So far seven chances for Bangaluru and six for Northeast. Dimas Delgado is turning out to the soul of this Bengaluru side. He plays to Nishu Kumar, then the youngster tries to find Sunil Chhetri. Good effort but not enough as the ball moves past the far post.

58' - Sunil Chhetri in trouble for a high boot. Reagan lucky not to get injured.  Don't expect that foul from India captain.

57' - Asamoah Gyan is now running the show. The class is permanent, as they say.

53' - Now, chances coming. Sunil Chhetri releases the ball for Dimas Delgado just outside the NorthEast goalmouth, but the Spaniard wastes it.

52' - What just happened. Sunil Chhetri fails to find a team-mate inside the NorthEast United half, then on the counter, Asamoah Gyan hits the crossbar. Gurpreet Singh Sandhu doesn't move.

48' - Another good ball from Asamoah Gyan, and Gurpreet Singh Sandhu was forced to take aerial route to thwart NorthEast attack. On the counter, Bengaluru test the visiting team.

46' - NorthEast soon loss possession and goalkeeper Subhasish Roy beats Udanta Kumam, the fastest on the pitch tonight, to the ball.

Bengaluru started sprightly, but Udanta Kumam missed a couple of chances. Then, Martin Chaves got the first strike on target, testing Gurpreet Singh Sandhu with a brilliant curler. The Uruguayan got another chance after a suicidal back pass from one of the Bengaluru defender, but failed to hit the target. Asamoah Gyan was slow to start, but as the game grew, he grew too.  Mind you, Bengaluru are undefeated at home since December 2017.

45' - One minute added. And Gyan wins a throw-in from the sideline melee.  And after some high balls, and a free-kick for NorthEast to end the first half.

44' - NorthEast get a move going but one again return empty-handed. From the following play, Bengaluru launch their own attack, only to be cut short.

43' - Closing minutes of the first half, and it's still nil-nil. And they are playing head volleyball. Highballs. After some frenetic moves, Sunil Chhetri gets a clear shot at the goal. But it was blocked, and Bengaluru players claim for a handball was turned down. Not conclusive. Hand or post. Nishu Kumar was brilliant in the run-up.

40' - First sign of what Asamoah Gyan can do. Rising high above Bengaluru forwards to clear the ball away.

39' - Meanwhile, Sunil Chhetri wins a corner after a tight run. But nothing comes of it. Slippery ground after incessant rain.

38' - Brilliant play for NorthEast with Redeem Tlang drilling inside the Bengaluru defence but commits the cardinal sin of keeping the ball too long. That was from a Bengaluru corner.

35' - Asamoah Gyan slots the ball, but he was clearly off-side. Poor defensive work from Bengaluru. They are enjoying better possession, but whenever NorthEast move forward, it becomes a threat.

32' - A long ball from Subhasish Roy Asamoah Gyan but Bengaluru win the ball back and launch a quick counter.

30' - After a fleeting foray inside the Bengaluru half, NorthEast once again concede ground as the hosts continue to press hard for the opener. A corner, delivered by Dimas Delgado, finds Ashique Kuruniyan but the Indian defender fails to connect properly.

27' - Udanta Kumam, you had to hit to target, to score. Brilliant through ball from Raphael Augusto, but the Indian international once again fails to find the target.

25' - Kai Heerings stands tall in a one-on-one run against one of the Bengaluru attackers.

24' - Martin Chaves, the Uruguayan tries a body block against Ashique Kuruniyan near the Bengaluru box. Lucky to escape unbooked.

23' - Harmanjot Khabra beaten for pace by a NorthEast defender. He cries foul. But referee sees no foul.

21' - What an attempt. First one on the target of the match, courtesy Martin Chaves. Forcing a diving save from Gurpreet Singh Sandhu, from outside the box.

19' - Desperate clearance from Martin Chaves as Udanta Kumam tries to cut inside the box. From the cross, a poor one from Udanta, Sunil Chhetri goes with the outside of his right boot, and misses the target.

16 - Harmanjot Khabra started a move, then finds Ashique Kuruniyan from a crossfield ball, but the former Pune FC player fails to hit the target after a good solo run, missing the far post.

15' - Raphael Augusto plays the ball outside after a one-two with Udanta. Throw in for NorthEast.

14' - Asamoah Gyan is quiet so far. Dimas Delgado gets a through ball and one-on-one but fails to find any of his Bengaluru teammates.

12' - Dimas Delgado delivery from the far flag is far from perfect. Goal kick for Northeast United.

11' - Cagey start to the match so far, except for a couple of good looking moves from Bengaluru. Ashique Kuruniyan is quick but fails to keep possession. Luckily a corner.

9' - Nikhil Kadam wins a foul, but no card to Bengaluru player.

8' - Nishu Kumar is doing a lot of running, interchanging with Udanta on the left flank. He just delivered a cross for Sunil Chhetri, but NorthEast defenders are alert.

7' - A quite little period of possession for NorthEast. Rakesh Pradhan manages to draw a foul from Udanta inside the Bengaluru half. Nothing comes of it though.

4'- NorthEast United have managed to beat Bengaluru only once, a biggie - in the first leg of the semi-final last season. And it will be tough to repeat that feat again, considering how they have been made deprived of a settled team, losing players to cherry-picking. Case in point, yesterday's hero.

2' - Sunil Chhetri releases a brilliant ball for Udanta Kumam, but the boy from Northeast India failed to make it count, just missing the target. He was apprehensive.

1' - A good start from the Bengaluru, making inroads deep inside the Northeast backline.

7:27 PM IST: Players are out in the centre, ready for the National Anthem.

7:20 PM IST: Here's what happened last time these two teams met in the ISL: Bengaluru FC sealed their place in the final for the second successive year with a 3-0 win in the second leg of the semi-final play-off at the Sree Kanteerava Stadium. But, Bengaluru were made to work hard by a resilient NorthEast United, who were finally outdone by a 72nd-minute goal from Miku. Late strikes from Dimas Delgado (87th) and Sunil Chhetri (90+2) followed as Bengaluru overturned the 2-1 defeat in the first leg. The aggregate score read 4-2 in favour of Bengaluru.

6:30 PM IST: Here are the highlights over the years

Bengaluru FC | 2017-18: The club ended as runners-up, losing in the title clash to Chennaiyin FC; 2018-19: Caudrat's template led Bengaluru to a fantastic season, finishing as winners after defeating FC Goa in the finale.

Bengaluru FC coach Carles Cuadrat spoke of a clean slate as his side look set to begin a new Indian Super League campaign at the Sree Kanteerava Stadium. While the match is a repeat of last season’s semifinal, NorthEast United have seen a significant change in personnel, and Cuadrat maintains that the challenge will be fresh.

“NorthEast United will be a dangerous side and we will have to be at our best to get a positive result. It is true that we have beaten them three times at home, but the numbers and records are only there to be broken. We understand that this is a new season, with new players and new coaches in many of the teams. Past results have little meaning going into a new campaign,” said Cuadrat.

Much has changed for NorthEast since that night at the Kanteerava. The Highlanders have battled an exodus that saw coach Eelco Schattorie and striker Bartholomew Ogbeche head to Kerala Blasters, by signing Croatian Robert Jarni and Ghanaian Asamoah Gyan to replace the duo.

Jarni, who has been part of three World Cups as a player, now holds the reigns at NorthEast and has had a little more than a month with his squad. And while Gyan is arguably the most high-profile signing of the league this season, the visitors have added foreign firepower in strikers Maximiliano Barreiro (Argentina) and Martin Chaves (Uruguay) and defender Kai Heerings (The Netherlands).

Cuadrat, without giving too much about what his starting eleven would look like, said he was lucky to be the manager at a club where a host of players can comfortably play in multiple positions.

The Blues made as many as six new signings ahead of the season and it’s anyone’s guess how Cuadrat chooses to roll out his team in the opener.

“I am happy to know that I have players who can play in various positions. This gives me a lot of options, and I’ve used the pre-season to try out a few new formations and patterns. I’m positive that the new signings will gel with the system as the season progresses and we’re all really looking forward to the first game,” added Cuadrat.

The match between the Blues and NorthEast United will kick off at 7.30 pm and while telecast will be on HotStar and the Star Sports network.