India's R Ashwin picked up his 27th five-wicket haul as South Africa were 385/8 at the close of play on Day 3 of the opening Test in Visakhapatnam. For the visitors, Dean Elgar and Quinton de Kock hit 160 and 111 respectively. Catch highlights of India vs South Africa, 1st Test, Day 3 here 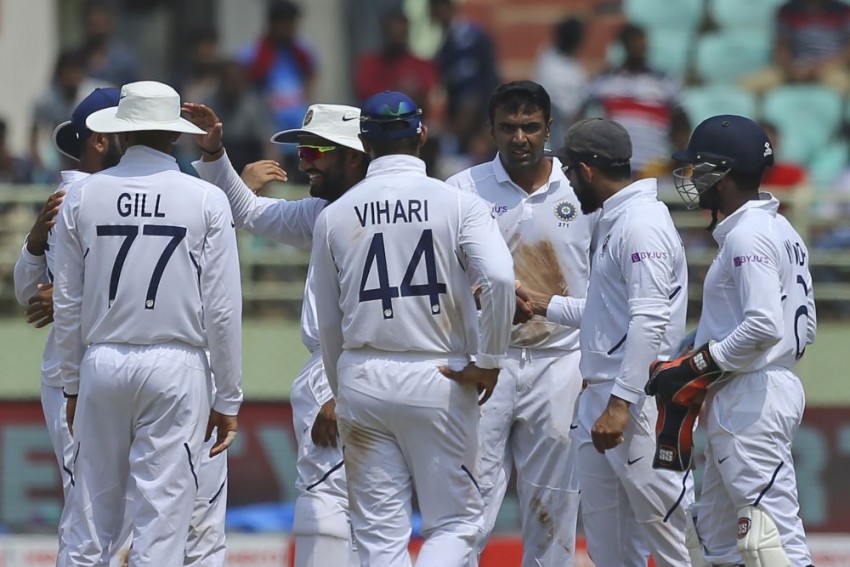 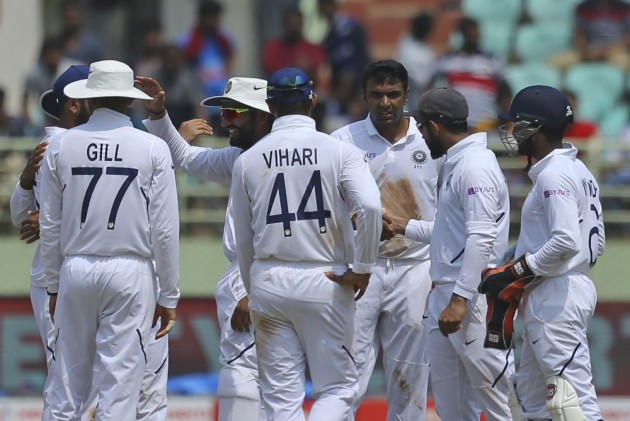 South Africa were 385/8 in their first innings in reply to India's 502/7d on Day 3 of the first Test in Visakhapatnam on Friday (October 4). Opener Dean Elgar made 160, while Quinton de Kock scored 111. For India, R Ashwin took five wickets. The Proteas are still 117 runs behind with two wickets in hand. Get highlights of India vs South Africa, 1st Test, Day 3 here (SCORECARD | CRICKET NEWS)

17:01 hrs IST: That's it. South Africa 385/8, still 117 behind. Elgar, Du Plessis and De Kock showed great resistance against quality spin bowling on a surface that got slower. But a fine day for Ashwin. Another five-wicket haul. Shouldn't he feature in X regularly?

16:46 hrs IST: OUT! Flighted delivery from Ashwin, it turns and spins back in, and clips the top of middle and leg. 27th fifer in Tests for the Indian. Philander departs for a 10-ball duck. Keshav Maharaj comes to the crease. South Africa are 378/8

16:30 hrs IST: OUT! Straight delivery from Ashwin, and it sneaks between De Kock's bat and pad to rattle the stumps. Marvellous knock from the South Africa No. 7 - 111(163). Vernon Philander comes to the crease. South Africa are 370/7

With new states joining the Indian cricket ecosystem, BCCI's GM (cricket operations) Saba Karim tells Outlook the challenges in running the domestic circuit that acts as a feeder system. He also revealed that out of 141 cities till date, 68 cities have confirmed to host domestic matches.

16:13 hrs IST: SIX! De Kock brings up 100! Floated from Ashwin, outside off, the South African gets down on one knee, and creams this over the extra cover region for a maximum. Wonderful innings! South Africa are 365/6

15:52 hrs IST: OUT! 200th Test wicket for Jadeja. Elgar is disappointed with himself. A length ball, outside off, he wanted to sweep but ended up getting a top edge. Pujara, the fielder at deep midwicket boundary, ran forward to complete a magnificent catch. A memorable innings from Elgar! Standing ovation for him. Senuran Muthusamy comes to the crease. South Africa are 343/6

Meanwhile, South Africa great Shaun Pollock is concerned about players at their peak choosing county cricket over the national team in his country but says it is a problem "you can't fix as sport has become business". READ HERE

14:22 hrs IST: Single towards mid-off and that's a half-century for De Kock. Really good from South Africa's perspective. Game on in Vizag! South Africa are 268/5. Elgar 129*

14:11 hrs IST: FOUR! Flighted delivery from Rohit, De Kocks makes space and hits this inside out to deep extra cover for a boundary. Seven off the over. South Africa are 256/5. Elgar 122*, De Kock 45*

13:53 hrs IST: While Ashwin and Jadeja have got more purchase out of the surface than South Africa's spinners, the pitch doesn't appear to have demons in it. The odd ball, though, jumps off the wicket. South Africa are 243/5. Elgar 116*, De Kock 38*. Time for drinks!

13:42 hrs IST: It's gone quite grey. Floodlights starting to come on. Let's hope the rain stays away. South Africa have done a splendid job so far. The next two days would be interesting.

Roger Binny, the former India all-rounder, has been elected president of the Karnataka State Cricket Association (KSCA) following a victory in the election held on Thursday (October 3). Binny, who had previously served as vice-president of KSCA, received 943 votes while his competitor M.M Harish got 111.

Meanwhile, Andy Moles has been appointed the Director of Cricket and chief selector of Afghanistan. Moles has previously worked with them as coach between 2014 to 2015 and was also the interim head coach after the 2019 World Cup with Phil Simmons stepping down.

12:52 hrs IST: SIX! That's a century for Elgar. Ashwin gives some flight, the South African gets down on one knee and hammers it over mid-wicket for a maximum. What a knock! Has shown great composure under pressure. South Africa are 193/5

12:45 hrs IST: OUT! Du Plessis has hit it straight to leg slip. He's disappointed. The Protea skipper had to play it off the front foot. The ball was turning into his pads, and he looks to work it to the the leg-side, but finds Pujara who makes no mistake. Quinton de Kock comes to the crease. South Africa are 181/5.

12:35 hrs IST: FOUR! Full from Ashwin, on middle stump, Du Plessis gets low and sweeps this firmly to the deep square leg boundary. Turning out to be a superb phase for South Africa, who are 169/4. Elgar 84*, Du Plessis 55*

12:26 hrs IST: Double and that's a half-century for Du Plessis, first in India. Flicks to fine leg with soft hands to reach the landmark. Needs to keep going. South Africa are 158/4. Elgar 78*

12:12 hrs IST: Welcome back for the post-lunch session. Elgar to take strike. It's Shami to bowl.

Forget Twenty20 cricket - The Hundred is here. Here's a look at the new white-ball tournament to be staged in England next year

Arsenal boss Unai Emery has told Mesut Ozil he faces a fight to regain his place in the team after being left out of Thursday's Europa League win over Standard Liege. Ozil was not in the squad as the Gunners cruised to a 4-0 win at Emirates Stadium, with Gabriel Martinelli scoring twice before further goals from Joe Willock and Dani Ceballos. READ HERE

11:14 hrs IST: DROPPED! Length ball from Jadeja, around off stump,  Elgar looks to defend but gets an outside edge. Saha can't hang on to it. Tough chance, but that should have been taken. How costly will it prove to be? South Africa are 146/4. Elgar 75*, Du Plessis 42*

11:05 hrs IST: SIX! Tossed up from Jadeja, around middle and leg, Elgar charges down the wicket and smacks this over long on for a maximum. Expensive over from the Indian, 16 off it. South Africa going really well here. They are 140/4. Elgar 74*, Du Plessis 37*

10:56 hrs IST: FOUR! Vihari angles it away from the off-stump, Du Plessis gets a thick outside edge that runs away to the third man boundary. South Africa are 120/4. Elgar 56*, Du Plessis 35*

10:50 hrs IST: Single towards long-on and that's a half-century for Elgar. A gritty knock from the South Africa opener. Needs to convert this into a big one. While he has defended well, the best part of his innings has been his ability to make full use of the scoring opportunities. That does reduce pressure. South Africa are 114/4. Change in bowling. Hanuma Vihari comes into the attack.

10:40 hrs IST: FOUR! Flatter delivery from Jadeja, around middle, and Elgar hits it to the deep backward square leg boundary. The fielder at fine leg has no chance. South Africa are 98/4. Elgar 48*, Du Plessis 22*

10:31 hrs IST: Nice and tidy over from Jadeja, only two off it. South Africa are 92/4. Elgar 44*, Du Plessis 20*. Drinks are on the field now. Solid first hour for India. For the visitors, a lot of rebuilding work remains to be done.

10:28 hrs IST: SIX! Length ball from Ashwin, on off stump, Du Plessis dances down the track and launches this over long-on for a maximum. Excellent! South Africa are 90/4. Elgar 43*, Du Plessis 19*. Jadeja comes into the attack.

Arsenal forward Pierre-Emerick Aubameyang has emphatically hit back at criticism levelled at him by Hans-Joachim Watzke – branding the Borussia Dortmund chief executive "a clown". READ HERE

10:12 hrs IST: FOUR! Flight from Ashwin, on middle and leg, Du Plessis sweep this through square leg. Poor over from the Indian, eight off it. South Africa are 72/4. Elgar 36*, Du Plessis 8*

09:57 hrs IST: OUT! Length delivery from Ishant, pitched outside off, comes back in and the low bounce does the job for the Indian. Bavuma is comfortably beaten on the inside edge as this hit the pad. Look plumb in real time. Faf du Plessis comes to the crease. South Africa are 63/4. Elgar 35*

Meanwhile, India's Asian champion shot putter Tejinder Pal Singh Toor failed to qualify for the final round of the World Championships despite producing his season's best effort at Doha, on Thursday (October 3). The 24-year-old Toor finished eighth in qualification round Group B and 18th overall out of 34 competitors with a best throw of 20.43m from his three attempts. READ HERE

09:45 hrs IST: FOUR! Flight on offer from Ashwin, and Elgar lifts this over mid-on for a boundary. Vihari tries chasing it down but doesn't get there. South Africa are 53/3. Elgar 31*, Bavuma 12*

09:38 hrs IST: Fine over from the offspinner. No margin for error. Elgar needs to be careful here. South Africa are 43/3

09:35 hrs IST: FOUR! Length ball from Ishant, outside off, Bavuma attempts to drive but gets a thick edge and the first and third slip have no chance. Had the fielders been in right spots, this would have been an easy one for second slip. The pacer isn't impressed. South Africa are 43/3. Elgar 27*, Bavuma 6*. Spin from the other end. Ashwin it is.

09:30 hrs IST: All in readiness for the start of the Day 3. Elgar and Bavuma are at the crease. Ishant to start proceedings.

09:00 hrs IST: Agarwal - "I am extremely happy. It is a feeling I can't describe. Glad that I could make my maiden hundred into a double. I am happy with the way I played, I am batting well and if we can keep batting together like this upfront, it will be great for the team. If Rohit and me can keep contributing to make 450-500 every time, it will be very tough for the opposition. I would be lying to say that you only have to think about your own game. At times you feel that you are playing well and I can take a chance, but that's not how it works. You have to be patient. We had a great partnership to lay the foundation and get to 300 runs. The way he (Rohit) dominated the spinners was great to see."

BIG NUMBER - Sixes (12) hit by India's openers - six each by Rohit and Mayank - the most by openers in an innings. The previous best was 11 each - by Australia against Zimbabwe in 2003-04.

STAT ATTACK - Mayank Agarwal became the fourth Indian to convert his maiden Test century to a double hundred. The ones to do so before him were Dilip Sardesai, Vinod Kambli, and Karun Nair.

08:40 hrs IST: Hello and welcome to Outlook's live coverage of Day 3 of the opening Test between India and South Africa.

Rohit Sharma resumed on 115 and Agarwal, 84 on Day 1, soon joined him in reaching three figures - the openers then going on to become only the third Indian pair to have a first-wicket partnership worth 300.

South Africa finally made a breakthrough when Rohit (176), one shy of his best Test score, was stumped off Keshav Maharaj (3-189) in his first innings as an opener.

Cheteshwar Pujara fell from the first ball after lunch and captain Kohli (20) meekly chipped back to bowler Senuran Muthusamy to give him his first Test dismissal before Agarwal reached his double century off 358 balls.

After Ajinkya Rahane became the fourth man out, Agarwal's knock was finally ended when Piedt took a diving catch at deep midwicket from Dean Elgar's only over, with Kohli declaring after Jadeja (30 not out) helped take India past 500.

South Africa then lost Markram at the start of their eighth over, a delivery from Ashwin that snuck between bat and pad, and the same bowler found De Bruyn's edge to leave the Proteas two down.