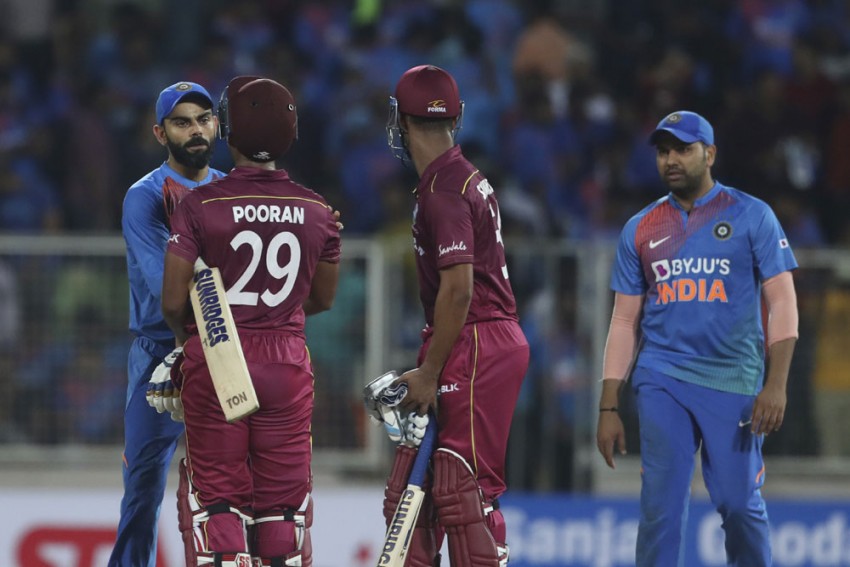 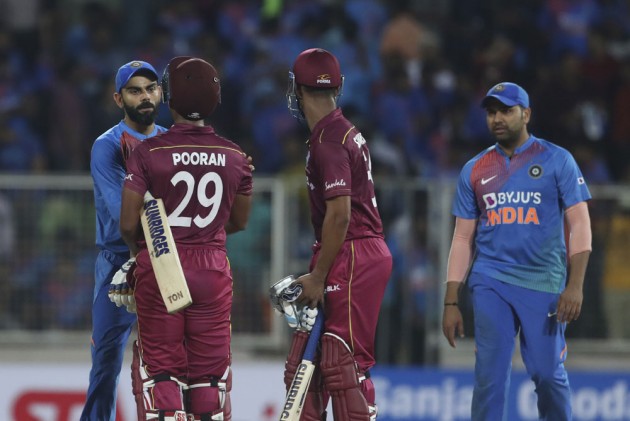 Indian team's frailties while batting first was thoroughly exposed by a disciplined West Indies, which kept the three-match T20 series alive with a comfortable eight-wicket victory in the second game at Thiruvananthapuram on Sunday.

A below-par score of 170 for 7 with only 38 runs in the final five overs was never going to be enough keeping the dew factor in mind and senior opener Lendl Simmons (67 no off 45 balls) along with Evin Lewis (40 off 35 balls) added 73 for the first wicket to seal the issue. West Indies reached the target with as many as nine balls to spare.

With another poor day on the field barring an exceptional sideways running catch from skipper Virat Kohli, the Indian bowlers were way of the target, especially spinners Ravindra Jadeja (1/22 in 2 overs) and Yuzvendra Chahal (0/36 in 3 overs) were off the mark.

West Indies' dominance was evident by the half-dozen sixes that they hit apart from 11 boundaries compared to five maximums by the hosts, four of which were hit by rookie all-rounder Shivam Dube.

Simmons hot four sixes while Lewis hit three and it helped that the spinners didn't vary the length of their deliveries.

Unlike first innings, when hitting through the line was difficult, it became easier in the second innings with the ball coming onto the bat easily. Nicholas Pooran (38 off 18 balls) coming back after a brief ban on charges of ball-tampering, also added insult to injury with a couple of sixes and four boundaries.

After the Bangladesh T20 in Delhi, this is the second time in the last five games that India have lost trying to post a competitive score.

Dube justified his promotion in the batting order with a smashing half-century but other Indian batsmen struggled after being put in to bat.

Despite Dube's 54 off 30 balls, which had four huge sixes apart from three fours, India didn't get the required momentum during the death overs on a track where Caribbean seamers used a lot of back of length slower deliveries along with well-disguised short balls.

The last five overs India couldn't get the required momentum as Rishav Pant (33 not out off 2 balls) tried his best couldn't connect the big shots.

The variation enabled West Indies to compensate for the 13 wides and two no-balls that they bowled during the evening.

Kesrick Williams after being subjected to humiliation from Virat Kohli, came back well with figures of 2 for 30 in four overs including the prized scalp of the Indian captain (19 of 17 balls). There was no 'Notebook Celebrations' but just a quiet 'finger on lips' this time around.

The other bowler, who impressed was leg-spinner Hayden Walsh (2/28 in 4 overs), who pitched the ball good areas and was also able to get some sharp turn on his leg breaks.

Left-arm spinner Khary Pierry who gave away only 11 runs from his 2 overs in the Powerplay, was surprisingly not called on to bowl again.

The highlight of the Indian innings was giant Mumbai all-rounder Dube's big-hitting prowess which he finally displayed at the international level.

The southpaw took a liking to the bowling of West Indies captain Kieron Pollard, smashing three huge sixes in the ninth over. He reached his maiden international fifty in 27 balls (4 sixes, two fours).

Skipper Kohli, who decimated the Windies attack in the game on Friday, saw Dube go big, but couldn't get going, falling to Williams as he mistimed a cut.

West Indies' ploy of bowling back of the length did work as the deliveries were not easily coming onto the bat making it difficult for hitting through the line. Only briefly, it was Dube, who got a hang of Pollard's slower ones and picked them up over deep mid-wicket region.