As many as 16 South African wickets fell on day three of the third and final Test at Ranchi with Mohammed Shami and Umesh Yadav doing the bulk of the damage. Staring at another massive defeat, the Proteas were 132 for eight in their second innings atStumps with India needing to turn up on day four to complete formalities 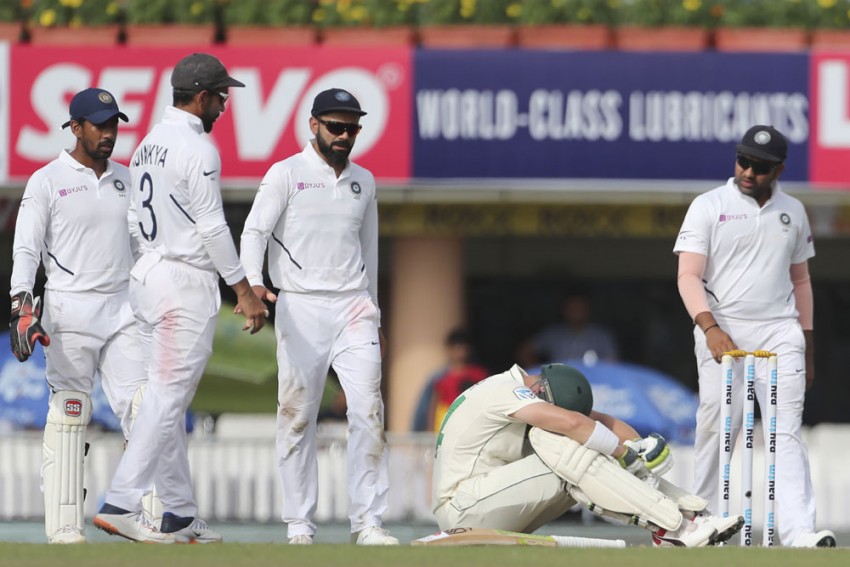 Indian players walk to check on South Africa's Dean Elgar, on ground, after he was hit on a delivery by India's Umesh Yadav during the third day of third and last cricket test match between India and South Africa in Ranchi, India, Monday, Oct. 21, 2019.
AP Photo
PTI October 21, 2019 00:00 IST IND Vs SA, Ranchi Test, Day 3: Dominant India Two Wickets Away From 3-0 Series Sweep 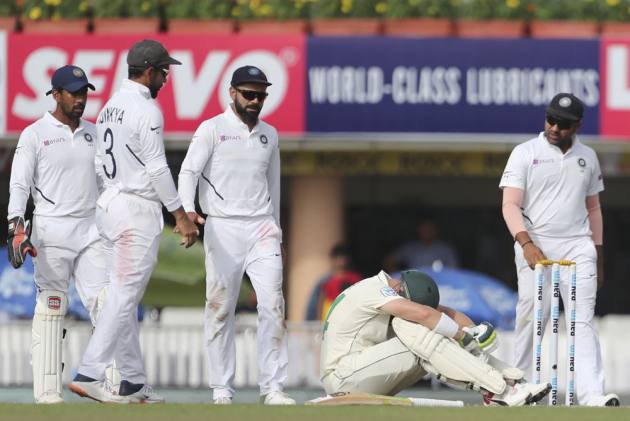 India's pace prowess came to the fore yet again as Mohammad Shami and Umesh Yadav bossed over a fragile South African batting line-up to put the hosts on the cusp of a 3-0 whitewash at Ranchi on Monday.

As many as 16 South African wickets fell on day three of the third and final Test with Shami and Umesh doing the bulk of the damage. The duo bowled with fiery pace and were also rewarded for consistently attacking the stumps.

Staring at another massive defeat, South Africa were 132 for eight in their second innings at stumps with India needing to turn up on day four to complete formalities.

It has proved to be another dismal tour of India for the South African batsmen and notwithstanding the high quality of fast bowling, they looked like sitting ducks on Monday. Resuming the day at nine for two in their first innings, South Africa were bowled out for 162 before India enforced the follow-on.

Umesh set the tone of the day by clean bowling South African skipper Faf du Plessis with an unplayable late outswinger. If Umesh was lethal in the first innings, Shami upped his game in the second. The left-arm spinners, debutant Shahbaz Nadeem and Ravindra Jadeja, too did their bit as India steamrolled the opposition.

Like he had done in the first innings, Umesh gave the first breakthrough in South Africa's second essay when he cleaned up Quinton de Kock (5) with a perfect length delivery that angled across the left-hander.

Then Shami ripped through the middle-order, first castling Zubayr Hamza for a duck with a full-length delivery before getting rid of Faf Du Plessis (4) and Temba Bavuma (0) in successive overs to leave them gasping at 22 four in their second innings.

An early tea was taken as both the teams were left shaken after opener Dean Elgar was hit on the helmet by a 145kmph bouncer from Yadav. The batsman took a pause, sat on the ground before going off the field.

Watch: Jadeja Leaves One Bail In The Groove While Plucking Klaasen

India wrapped up the South African first innings for 162 in 56.2 overs in yet another meek batting surrender that lasted less than two sessions after the visitors resumed the day at nine for two in five overs.

Local lad Nadeem cleaned up the tail by trapping Anrich Nortje in front to make it a memorable debut, returning with figures of 11.2-4-22-2.

Nadeem had his "big moment" when he dismissed Temba Bavuma (32) for his first wicket in international cricket. He foxed Bavuma with his flight as the batsman stepped out of the crease, leaving Wriddhiman Saha to do the rest.

Nadeem's first international wicket incidentally came even before any batsman could score run against him.

South Africa began the second session staring at an imminent follow-on as they lost their seventh wicket on the fourth ball after the lunch-break when a hapless Dane Piedt was beaten by Shami's raw pace as it cut back in to trap him in front.

What followed was a body blow in 39th over where Shami made Nortje hop all over with his sharp incoming bouncers though the tail-ender managed to survive the hostile spell.

The only high point of the South African batting in the first innings was Zubayr Hamza as the 24-year-old, who replaced an injured Aiden Markram, showed fine application in his 62 off 79 balls.

Hamza alongside Temba Bavuma (32) gave the Proteas some ray of hope in a 91-run partnership that came after Yadav cleaned up Du Plessis.

Yadav looked ominous and was unlucky a couple of times when Hamza edged it just short of Virat Kohli at first slip. Hamza soon found himself at ease, displaying some beautiful drives to race to his 50 off 56 balls.

Hamza, who struck 10 boundaries, hit seasoned off-spinner Ravichandran Ashwin for a six over mid-on to bring up his maiden fifty in his second Test.