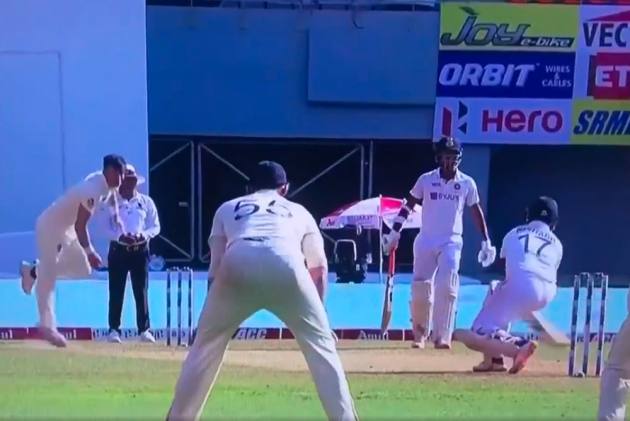 Rishabh Pant reduced England legend James Anderson to a club bowler by hitting England legend for a four with an audacious reverse sweep during the second day's play of the fourth and final Test at the Narendra Modi Stadium, Ahmedabad.

Pant, who scored his first Test century at home and third overall, showed a special liking of Anderson after England took the second new ball after Tea on Friday.

In the 83rd over, as Anderson delivered a fuller delivery, Pant outrageously reverse swept it over slip. Watch the shot here, and don't miss Anderson's reaction:

Did anyone play this shot before Rishabh Pant against Jimmy Anderson with the new ball?#INDvENG pic.twitter.com/eay4Wx0CSE

Did anyone play this shot before Rishabh Pant against Jimmy Anderson with the new ball?#INDvENG pic.twitter.com/eay4Wx0CSE

In the next over, Pant hit Joe Root for a six, off the first ball, to bring up his century. Watch it here:

The Rishabh Pant way to get to a ðÂÂÂÂ¯ after being dismissed twice in the 90s this year ðÂÂÂÂÂÂ #INDvENG pic.twitter.com/C9WSEHG7Ex

In reply to England's 205, India were 294/7 at the close of play on Day 2 at Motera with Sundar and Axar Patel unbeaten on 60 and 11 runs respectively.

India need at least a draw to qualify for the final of ICC World Test Championship. India lead the four-match series 2-1.