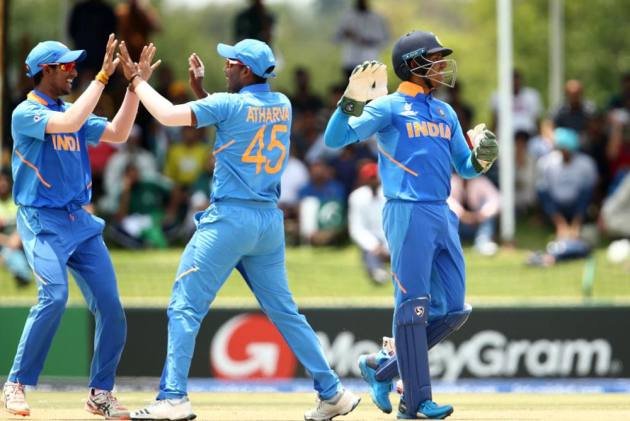 Defending Champions India dismissed Pakistan for 172 in the first semifinals of the Under-19 World Cup at Potchefstroom, South Africa on Tuesday.

Pacer Kartik Tyagi (2/32 in 8 overs) bowled yorkers at will while leg-spinner Ravi Bishnoi (2/46 in 10 overs) was a difficult proposition to read for the Pakistani batsmen.

Pakistan skipper Rohail Nazir (62 off 102 balls) and opener Haider Ali (56 off 77 balls) were the only ones to make a significant contribution as the innings lasted 43.1 overs.

Tyagi, probably one of the fastest bowlers in India in his age category, bowled an inswinging yorker wide off crease to uproot Irfan Khan's off-stump and then got his second wicket with an intimidating bouncer that removed tail-ender Tahir Hussain.

In between, Bishnoi bowled his fast googlies to get rid of Fahad Munir (0) and Abbas Afridi (2).

The only time Pakistan looked to be gaining some foothold was during the 62-run stand between Haider and Rohail before Yashasvi's part-time leg-breaks saw the end of opener's effort that had nine fours.

Skipper Rohail did scratch around and got a fifty but never for once did he look in any sort of control and was holed out at square leg.

Ali's 77-ball 56 contained nine hits to the fence, while Nazir smashed six boundaries in his 102 ball 62.