India defeated Pakistan by 10 wickets in the semifinals of the U-19 Cricket World Cup in South Africa. India produced an excellent bowling display restricting their opponents for 172 in 43.1 overs, overhauling the target with ease. India scored 170 for no loss in 35.1 overs. Follow here highlights of Pakistan (PAK) Vs India (IND) of the U-19 Cricket World Cup semifinals here.

19:43 hrs IST: SIX!! JAISWAL FINISHES IT IN STYLE!!! Ali sends a poor delivery, Jaiswal sends it past the deep mid-wicket region for a six for his first hundred of the World Cup.

19:21 hrs IST: FOUR!! Not a good ball by Afridi. Saxena sends it down to third man boundary.

19:19 hrs IST: SIX! A shorter delivery by Afridi. Jaiswal sends it through midwicket.

19:17 hrs IST: A full toss by Munir. Saxena sends it to deep cover. One run and a fifty for Saxena.

19:09 hrs IST: FOUR!! It was a full slower ball by Afridi from around the wicket. Jaiswal clears the front leg and lifts it over the fielder in infield. Sent to the midwicket boundary.

19:00 hrs IST: A length delivery by Munir at the stumps. Jaiswal defends it to leg side.

18:50 hrs IST: One run. It was short length delivery. Jaiswal opens the face of his bat and runs it down. 100 reached!

18:43 hrs IST: FOUR!!! Ali's ball inside edges Saxena and nutmegs the wicketkeeper. Saxena went for the length ball and tried to defend it.

18:21 hrs IST: Two runs. It was a length delivery by Afridi. Jaiswal whips it in front of square on the on side. QUALITY BATTING!

18:12 hrs IST: FOUR! It was a short delivery by Afridi. Saxena cuts it away, past third man. Excellent timing!

18:00 hrs IST: One run. Saxena flicks Amir's delivery towards third man. India are picking up the pace though.

17:49 hrs IST: Two runs. Jaiswal's sends it towards long leg. Khan puts in a good dive running in from fine leg, to stop a four.

17:44 hrs IST: No run. Jaiswal drives the straight ball towards mid-off. A maiden over Amir.

17:41 hrs IST: No run. It was a good length ball by Tahir. Saxena drives it towards cover.

17:29 hrs IST: One run. A lofted delivery by Akram. Jaiswal sends it with a forward press at long-off.

17:24 hrs IST: One run. It was a good length ball by Tahir. Jaiswal sends towards mid-on.

16:49 hrs IST: OUT!! The wicketkeeper takes it. It was a short ball by Tyagi. Hussain tries to defend it but it comes off the high part and is an easy catch.

16:42 hrs IST: OUT! Mishra cramped Nazir at leg stump line with a short delivery. He tried for the pull, but lobbed it to Varma.

16:38 hrs IST: One run. It was a slower delivery by Mishra. Nazir drives it to sweeper cover.

16:29 hrs IST: WHAT AN INSWINGING YORKER BY TYAGI! HE IS DOING IT FOR FUN!! NAZIR LOOKS CLUELESS!

Also, the umpire turns down an lbw appeal.

16:23 hrs IST: OUT!! An excellent googly by Bishnoi and Pakistan keep falling away. He bowled over the wicket and got it to turn into the batsman. Good bowling.

16:17 hrs IST: OUT! A perfect inswinging yorker by Tyagi! Irfan tries to go for a drive, but it takes past his inside edge. Good bowling! Took the off stump!

16:13 hrs IST: One run and a half century for Nazir. Good innings by the Pakistan captain. Ankolekar sent it outside off. Nazir drives it to sweeper cover for his fifty.

15:43 hrs IST: OUT!!! A MIX-UP! UTTER CHAOS!! It was a length ball by Bishnoi. Qasim sends it to cover and goes for a run, but Rohail doesn't want one. The fielder sends it to the keeper, with both batsmen to the same end. Nazir reaches the non-striker's end earlier.

15:32 hrs IST: No run. A good full one by Mishra. Akram cannot make contact with it.

15:22 hrs IST: OUT!! Jaiswal sends a short delivery which turns away as Haider looks to cut it. It goes to the man at point in a low manner. He catches it with ease.

15:14 hrs IST: FOUR! Ali sends Bishnoi's delivery hard and off the edge. It goes past slip and away to third man. FIFTY FOR ALI! DOING IT WHEN ITS NEEDED!

15:09 hrs IST: FOUR! Not a good ball by Bishnoi. Ali sends it down to the leg side. The fielder inside the circle can't catch up. 50-run partnership has been achieved!

15:07 hrs IST: No run. Nazir drives it back to the bowler's left. Good delivery!

14:52 hrs IST: Two runs. It was a short one by Ankolekar. Nazir sends it to left of the man at sweeper cover. Good running.

14:42 hrs IST: It was a full outside off delivery by Tyagi. Nazir sends it to sweeper cover. One run.

14:34 hrs IST: FOUR!! It was a short delivery by Singh and pretty poor. It was wide outside off, Nazir cuts it and sends it to the boundary ropes.

14:27 hrs IST: No run. It was good short length delivery by Singh. Nazir sends it to backward point.

14:18 hrs IST: No run. It was a good length delivery by Mishra on leg stump. Ali sends it to square leg's left.

14:13 hrs IST: OUT!! Fahad never looked like he was in the game. Bishnoi sends a googly, it was short and turning away outside off. Fahad tried to pull it, but sends it for a catch in off side.

14:10 hrs IST: No run. Mishra sends a slower delivery, full toss outside off. Munir defends it to gully.

14:04 hrs IST: FOUR! Bishnoi sent a legbreaker, but it wasn't a good trajectory. Ali sends it over mid-on.

13:57 hrs IST: FOUR!!! Haider sends it through point. Tyagi bowled wide outside off and it was short. Good batting by Haider.

13:43 hrs IST: OUTTT!!!! NOT GOOD!! It was short of a length delivery by Mishra, at his mid-riff. Huraira tried to pull, but he cramped up. He sends it for square leg.

13:39 hrs IST: FOUR!! EXQUISITE!!! It was an inswinger from Mishra on a leg stump line. Huraira whips it to the midwicket boundary.

13:37 hrs IST: No run. It was a length delivery by Tyagi, coming in from wide of the crease. Ali left it alone.

13:08 hrs IST: "Very happy to bowl first. India-Pakistan matches are more hyped by the crowd than the players. No changes to the team," quipped Priyam Garg.

13:04 hrs IST: Pakistan's Rohail Nazir says after the toss, "We're going to bat first because it's a semi-final game. We have to put a good score on the board and defend it. It's time to make a mark in the big game, especially for us experienced players in the team. I think this match is always a bigger one against India, hopefully we have a good match today and play good cricket. Same team as the one that played Afghanistan."

13:01 hrs IST: Pakistan have won the toss and elected to bat first.

12:36 PM IST: The last time these two teams met in U-19 World Cup, in the semis, Shubman Gill smashed an unbeaten century (102 off 94) to help India thrash Pakistan by 203 runs. Earlier today, Gill retained his place in the Indian Test squad.

- Yuvraj Singh won Player of the Tournament in 2000;
- Shikhar Dhawan's tally of 505 runs in 2004 is still the most in a single edition;
- Sarfaraz Khan registered a record seven half-centuries across two campaigns;
- Mushtaq Ahmed claimed a record 19 wickets in 1988

India became the first team to qualify for the semi-finals after defeating Australia in a low-scoring affair. India defended 233/9 to win the match by 74 runs, with Kartik Tyagi claiming four wickets. Pakistan, on the other hand, were the last team to make the last four. They beat Afghanistan in their quarter-final match by six wickets in another low-scoring match.

Pakistan finished second behind Bangladesh in Group C. They won two -- against Scotland (by seven wickets) and Zimbabwe (by 38 runs), but rain spoilt their league match against Bangladesh.

Having seen some of the future stars cutting their teeth in this tournament and also With better broadcast and 'coverage', thanks to social media sharing and instant reactions, the ICC U-19 Cricket World Cup has now become a popular tournament for fans, players, organisers and even for talent scouts. Add an India vs Pakistan fixture, and it becomes a bigger spectacle. Any India-Pakistan match is the marquee game for every cricket tournament. Now, ICC has got one, irrespective of the stage. Like their senior pros, these future stars also know what to do when they meet in the field. So, expect an intense clash.

Reigning champions India are vying to join Pakistan as the only teams defend the title successfully. The Priyam Garg-led side should start as the favourites against Pakistan. But Pakistan lead the head-to-head record 5-4, thanks to their head-start. Though, just like the seniors, Indian colts are in a course-correction mode, having won their last three meetings, including a 203-run hammering in 2018. Both sides are unbeaten so far.

India are the most successful side in the tournament, winning the title a record four times. Pakistan have been crowned champions twice. They defeated India by 38 runs in the 2006 final in Colombo.

Yashasvi Jaiswal scored a gallant century to help India defeat Pakistan in the semifinal of the U-19 Cricket World Cup. Follow here highlights of Pakistan (PAK) Vs India (IND) here. 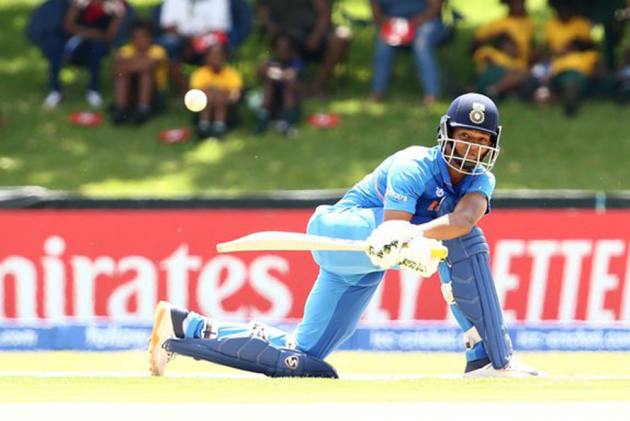