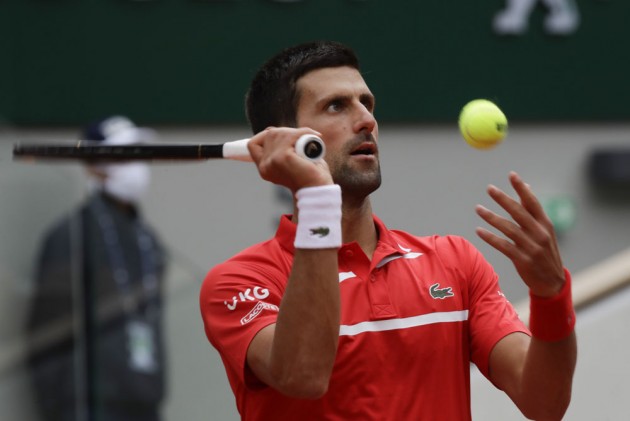 Novak Djokovic says unknown quantity Daniel Elahi Galan will be a "dangerous" opponent after the top seed breezed into the third round of the French Open, while Denis Shapovalov bowed out on Thursday. (More Tennis News)

The world number one will now face Galan, the Colombian ranked 153rd in the world who beat Tennys Sandgren in straight sets, for the first time.

Shapovalov was left to rue not being able to call on Hawk-Eye after a poor decision went against him, costing the Canadian match points in a tense encounter.

Stefanos Tsitsipas cruised into round three with a 6-1 6-4 6-2 defeat of Pablo Cuevas, while the in-form Andrey Rublev, Matteo Berrettini, Roberto Bautista Agut and Karen Khachanov were among the other seeds to progress.

A 70th victory on the Parisian clay ties Novak Djokovic with Roger Federer for second all-time in wins.#RolandGarros pic.twitter.com/HkLUAIopoO

Djokovic was far too good for Berankis and should see off unheralded lucky loser Galan in Paris.

The imperious Serb, who took just 83 minutes to wrap up his latest victory and produced a serving masterclass, says he will have homework to do before facing an opponent he has not come across before.

Djokovic said: "I don't know much about him, to be honest. I have never seen him play, so I'll have to obviously look at his matches, the videos, and try to prepare myself with my team.

"I know he played qualifications here, so he got quite a lot of matches already in these conditions, which definitely helps. It's going to be the first time that we get to face each other. He doesn't have much to lose. We will most likely play on Chatrier or Suzanne Lenglen, which probably will be his first match on the big courts.

"It's always dangerous facing opponents you never face before. On the big stadium they can really relax and play their best tennis of their lives or it can go a different way. I have to be alert and prepare myself well."

Shapovalov spurned opportunities to serve out the match and Carballes Baena took advantage, while also having a slice of luck when he saw a shot called in when it clearly landed beyond the baseline at a key moment.

He said: "It is a dream for me to win a match like this. I tried to be very solid and focused on my game.

NO DRAMA FOR TSITSIPAS

Tsitsipas stormed back from two sets down to beat Jaume Munar in the first round, but he had no such trouble against Cuevas.

The fifth seed's next assignment will be when he faces Aljaz Bedene on the back of a dominant performance, having won 88 per cent of points on his first serve and hitting 26 winners, while making just 18 unforced errors against Cuevas.

He said: "Grand slam tournaments are way different than any other tournaments we get to play the rest of the year. So it is very challenging coming in in one of them and it requires very good physicality.

"It's a different mindset. Sometimes your mindset is, okay, I go in and I finish it in two [sets], but here you have one more, and you have to be prepared for longer matches. It can turn out to be unpredictable sometimes. You have to have long-term concentration."