There will be a new name on the ICC Men’s Cricket World Cup as New Zealand and England bid to win the trophy for the first time. ENG beat NZ in the group stages but both lost to Australia at Lord’s. 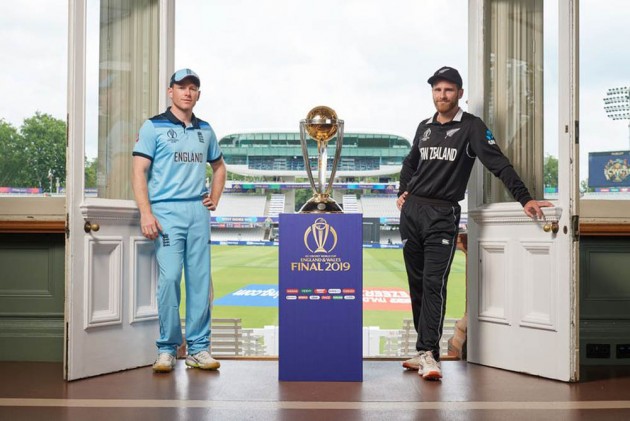 History is going to be made on Sunday, regardless of the result in the ICC Men’s Cricket World Cup final at Lord’s. Neither England nor New Zealand have ever tasted victory on the big stage before so there will be a new name on the trophy Sunday night.

And there are so many subplots to keep an eye on as Eoin Morgan’s side take on a Black Caps team that only four years ago served as the inspiration for England’s white-ball revolution.

Where better to start than with the skippers?

Morgan and Kane Williamson are of a similarly calm and confident disposition and back their charges to go out and play with freedom, regardless of the context.

Williamson also happens to be the best batsman in the Black Caps side and indeed one of the very best in world cricket.

Only once has he been dismissed for less than 40 this World Cup, and that came against England in Durham earlier this month courtesy of an extremely fortunate run-out.

His tons against South Africa and West Indies anchored a misfiring Black Caps batting line-up and make him undoubtedly the key wicket on Sunday.

Morgan might not have the weight of runs that Williamson does, but his influence is arguably even bigger on this England side.

He smashed 17 sixes against Afghanistan, and hit the winning runs against Australia in the semi-final on Thursday, but it is the way he captains that really makes this England team tick.

It was Morgan who encouraged his England side to get back to their aggressive best after their mid-tournament wobble and it was Morgan who went for the jugular on Thursday, with attacking fields and bowling changes to finish off Australia before they got a chance to rebuild.

The captain of England at their lowest ebb four years ago in New Zealand, there would be a pleasing symmetry if the Middlesex man was holding the trophy aloft on Sunday on his home ground against those self-same opponents.

BOULT FROM THE BLUE

Lockie Ferguson might have taken the most wickets for New Zealand at this tournament.

And Matt Henry was the man to run through the Indian top order on Wednesday in the semi-final.

But it was Trent Boult who got the prized wicket of Virat Kohli and who carries the key on Sunday at Lord’s.

The left-armer is up to 17 scalps this tournament and will be itching to get back to the home of cricket and get at the England top order.

England came unstuck on this ground in the group stages to Australia, and it was the left-armers of Mitchell Starc and Jason Behrendorff that did the damage.

Boult will be licking his lips at the prospect of swinging the ball back in down the slope to Jason Roy and Jonny Bairstow, and will have a point to prove after those same openers got England off to such a good start in Durham in the group stage meeting.

Boult has a hat-trick on this ground already this World Cup, and if they are to have any chance of restricting England on Sunday, he will need to take wickets in the first powerplay.

That has been his calling card for the last four years, and he is one of five men who have experienced a World Cup final before in the Black Caps side.

If he can bring that knowledge to bear on Sunday, New Zealand give themselves a proper chance of making history.

It will be a fresh pitch for the final on Sunday but it pays to know your history – both recent and distant – at the Home of Cricket.

All four group stage games played at Lord’s were won by the team that batted first – and all four were in emphatic style.

Both finalists played Australia at Lord’s and lost, and will be eager to set the record straight.

The toss could be all important but the Black Caps can take heart.

England’s dominant ODI record on home soil is not quite so impressive at Lord’s where they have won three and lost three of their last six 50-over clashes.

The last time these two sides met here in an ODI was back in 2013, and it was the Black Caps who won by five wickets.

Ross Taylor and Williamson remain from that Black Caps side while the England team included Morgan, Joe Root, Jos Buttler and Chris Woakes.

What New Zealand would give for a repeat of that victory.

Jason Roy and Jos Buttler open the batting for England in t20 cricket.

They have found themselves separated at the top and middle of the order in the 50-over format.

But if either of them hit the accelerator for England on Sunday, the Black Caps are going to be in trouble.

It has been a World Cup of highs and lows for both of them.

England’s wicket-keeper and vice-captain, Buttler kicked off the tournament with a century against Pakistan and a fifty against Bangladesh.

But since then the 28-year-old has failed to fire, with no score beyond 25 in his subsequent five innings.

By contrast Roy has been hitting his straps since the start of the tournament – he smashed 153 against Bangladesh in Cardiff and back to back to back 50s in England’s last three-must win encounters.

However, in between a torn hamstring sidelined the opener and coincided with England’s mid-tournament crisis.

But when Buttler or Roy pass 50 in ODIs, England invariably win. So if Morgan can get his two big names firing on Sunday – the Lord’s crowd are in for a show.

England were too strong for the Black Caps earlier this month at Chester-le-Street.

Bairstow replicated his heroics from the India game with another century and New Zealand were always up against it from then on.

But while that was an emphatic win, it is worth remembering that Lockie Ferguson missed out with a niggle and the Black Caps’ top wicket-taker will be firing in at full speed on Sunday.

Go further back and the clashes between these two teams are nearly always instant classics.

Think of Ross Taylor smashing 181 on one leg in Dunedin last year or Bairstow edging England over the line and announcing himself on the ODI scene in Durham four years ago.

The last two ODI series between the sides have been won by England 3-2 – there is not much between them.

And it was against New Zealand at Edgbaston four years ago that England’s revolution under Morgan and Trevor Bayliss began.

Roy was out first ball, slashing to point on his ODI debut, but England were undaunted and Buttler creamed a century as they passed 400.

The Black Caps didn’t get near, and the blueprint for England’s four-year plan was firmly in place.

If the culmination looks anything like the creation, then they will be dancing in the streets of St John’s Wood on Sunday.