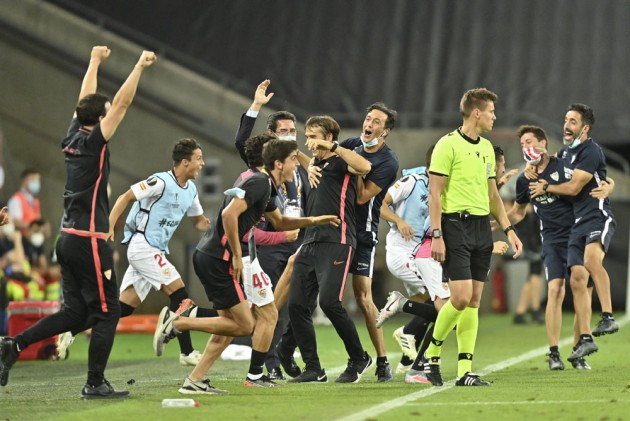 Winners of this competition in 2014, 2015 and 2016, Sevilla took another stride towards glory after resisting heavy pressure from United in this semi-final.

And De Jong connected sweetly with a cross swung over by Jesus Navas in the 78th minute to send Julen Lopetegui's side through to Friday's showpiece.

6 – Sevilla have reached their sixth UEFA Cup/Europa League final, at least two more times than any other side in the history of the competition. Habitually. pic.twitter.com/dT62P7oXZh

United took a ninth-minute lead when Fernandes showed a familiar swagger in driving his penalty past Yassine Bounou, after a shabby challenge from Diego Carlos on Marcus Rashford.

Sevilla were not waiting long for their equaliser, though. It came in the 26th minute, with Suso driving past David de Gea after left-back Sergio Reguilon broke forward and crossed low and out of reach of United's defenders.

Anthony Martial, Rashford, Fernandes and Mason Greenwood all had great openings for United, who dominated large parts of the game but could not put away a goal in open play.

Bounou was outstanding, and there were concerns for United when Sevilla asked for a penalty as a free-kick from Joan Jordan hit Fernandes on the elbow.

Sevilla were out of luck then but the winner soon arrived, with United’s defenders switching off.

De Jong was a Premier League flop during a short spell at Newcastle United six years ago, and he was only a substitute on this occasion after a goal drought.

But he would prove the Sevilla hero, half-volleying home the precise delivery from former Manchester City winger Navas.

What does it mean? - Manchester misery

What a rotten weekend it has proven for the Manchester clubs. After City's stunning defeat to Lyon in the Champions League quarter-finals, this was not a surprise on the same scale but it was a game United will come away from with deep regrets.

They had abundant chances and might need to look at whether they are a clinical finisher away from being where they want to be. With Victor Lindelof at fault for the winner, questions might be asked at the back as well. De Jong, meanwhile, has struggled to bring the prolific scoring form he showed for PSV to Sevilla, but he showed the old instinct was still there as he found space among the sleepy United defenders to win the game.

Suso never quite made the grade at Liverpool, but Navas was a Premier League star with City, and supporters of both of United’s main domestic rivals will have enjoyed their roles in the downfall of Ole Gunnar’s Solskjaer’s team.

Perhaps it was the generous defending down United's right side that allowed Reguilon to look a world-beater for parts of this game. Or perhaps the player on loan from Real Madrid belongs at the highest level and should be accommodated at the Santiago Bernabeu in the new season.

- Manchester United have now been eliminated from European competition by Spanish opposition for the third consecutive campaign, also losing to Sevilla in the Champions League Last 16 in 2017-18 and Barcelona in the 2018-19 Champions League quarter-finals.
- Sevilla are now unbeaten in their last 20 games in all competitions since a 2-1 defeat to Celta Vigo in February (W11 D9), just the fourth different side within Europe's top five leagues this season to enjoy such a run (also Bayern Munich, PSG & Real Madrid).
- Including both their quarter-final victory over Copenhagen and their match with Sevilla, United had 46 shots, with 21 hitting the target; however, the Red Devils managed just two goals from the penalty spot in those matches with a conversion rate of 4.4%.
- United have been awarded 22 penalties in all competitions this season, the most by a side in a single campaign within Europe's top five leagues since Barcelona in 2015-16 (24).
- Since his United debut on February 1 2020, only Robert Lewandowski (28) and Lionel Messi (27) have had a direct hand in more goals in all competitions than Bruno Fernandes (20 - 12 goals, 8 assists) within Europe's top five leagues.

Sevilla can begin to prepare for the final on Friday in Cologne, when Inter or Shakhtar Donetsk, who play on Monday, will await them.

Twice winners of the forerunner to this competition, the UEFA Cup, Sevilla love playing at this level. United's close season began when the final whistle blew.