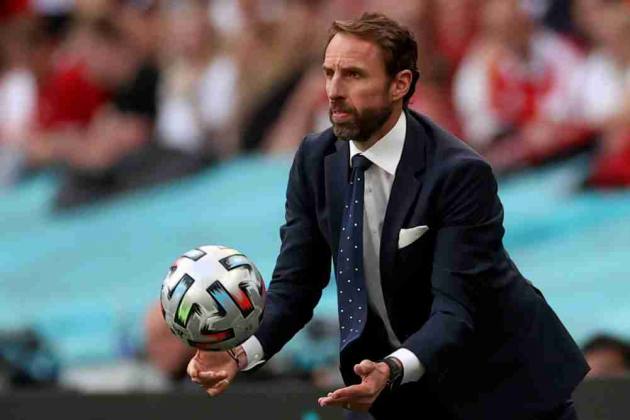 Behind the unassuming coach on the touchline, Gareth Southgate grasps the privilege of a status never sought and the leadership qualities now so admired in England. (More Football News)

Holding what used to be called the “Impossible Job,” Southgate is motivated — not burdened — by the responsibility on Sunday of leading England into its first major soccer final in 55 years against Italy.

And without losing perspective, he senses just what winning a first trophy since the 1966 World Cup would mean.

Patriotism sits comfortably with the coach at a time when Britain — a country made up of England, Scotland, Wales and Northern Ireland — is trying to redefine itself after leaving the European Union.

“We have so many things here that we should be proud of that we probably underestimate that,” Southgate said Friday.

“We are always looking at the negatives of our own country and yet we have got so much to be proud of and so much talent coming through in all industries really.”

Playing in a European Championship final on Sunday at England's home stadium is a chance for Southgate to talk up just what being British means to him.

“For an island our size we've got an incredible influence on the world and we've got to keep that in a positive way,” he said.

“There are historic things that we should be proud of. We've had unbelievable inventions in this country."

Whereas predecessors as England coach would stick to talking about matters on the field, Southgate has often talked about the role of sports in uniting the country since the 2016 Brexit referendum. And he doesn't shy away from how the nation has been shaped by military conflicts — and the place victory over Nazi Germany in World War II has in the sense of nationhood.

Southgate brought up how much it resonated that England beat the modern-day Germany 2-0 in the round of 16 at Euro 2020.

“People have tried to invade us and we've had the courage to hold that back,” Southgate said.

“You can't hide that some of the energy in the stadium against Germany was because of that. I never mentioned that to the players, but I know that's part of what that story was.”

The 50-year-old Southgate's values of decency and respect come in part from the lows he experienced as an England player, missing the key penalty in the Euro '96 shootout loss to Germany.

“If I'm talking to young people now, hopefully what they've seen is that those sorts of moments in your life don't have to define you,” he said.

“You have to work your way through them and develop resilience.”

Humility is why Southgate initially didn't see himself as qualified for the England job vacated by Roy Hodgson after the humiliating Euro 2016 loss to Iceland. Instead, he was the accidental England coach, being promoted from the under-21 team when Hodgson's immediate successor, Sam Allardyce, was removed after only one game in charge following indiscreet comments exposed in a newspaper sting.

“I was moving into a job where the profile was way beyond anything I'd had before so there was no way I was going to be the finished article,” Southgate said at the team's St. George's Park training base.

Southgate's only previous first-team coaching experience ended in 2009 by being relegated from the Premier League with Middlesbrough. But he sought to transform a depressed England culture and phased out players like all-time leading scorer Wayne Rooney.

“You've obviously got to gain confidence yourself that you can get the results and the things you implement are going to work and then the players see evidence that those things are working and then they start to believe in what you are telling them about the opposition or the way we need to play,” Southgate said.

“There is no short cut to that.”

He tries to instil a sense of responsibility in the players, working to reconnect them with a fan base that became disenchanted before Southgate led the team back to a semifinal appearance at the 2018 World Cup in Russia after a 22-year absence from the last four since Euro '96.

While politicians have criticized players for taking a knee, Southgate encourages them to use their platforms to campaign against racial injustice.

“That inclusivity is really important for us because I think that is what modern England is," Southgate said.

“We know it hasn't always been the case and there are historic reasons for that. But that level of tolerance and inclusion is what we have to be about moving forward.”

But above all, Southgate knows perceptions of him are shaped by results on the field.

“The leadership aspect ... I know is important for the country at the moment because I know we can make people's lives happier,” he said.

“It's a wonderful privilege to be able to make a difference. But if you get any of those bits wrong it can fall down and it's no use being able to speak about areas of society.

“If we don't get the tactical bit right, the selections right, if we don't manage the players the right way, the house falls down. I know now this is a lovely period in many ways but we've got to get Sunday right.” (AP)