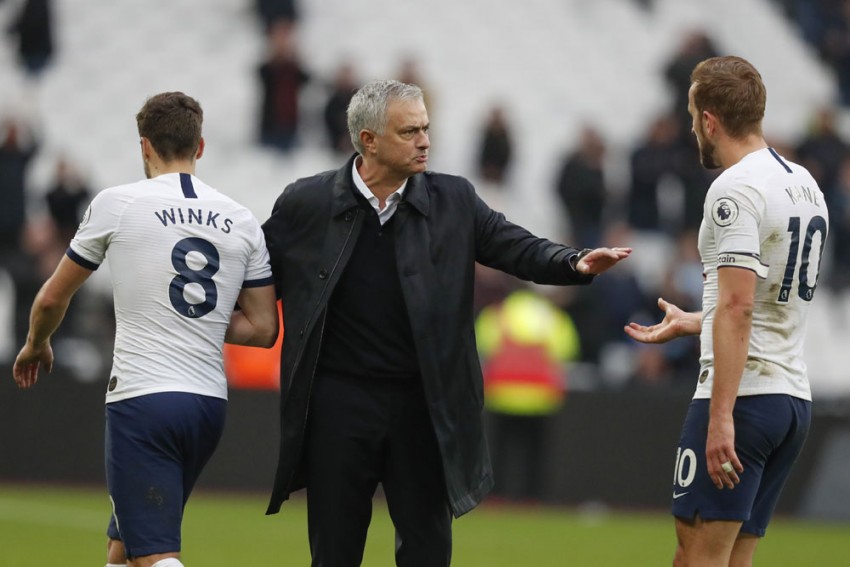 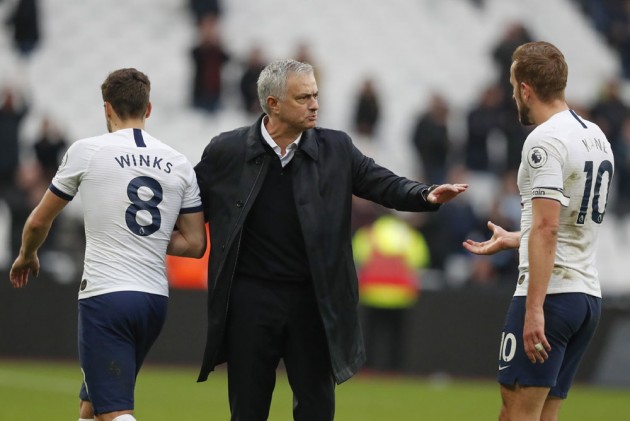 Mourinho left Christian Eriksen on the bench as a first-half goal and assist from Son Heung-min helped end a run of 12 away Premier League games without a victory for Spurs, despite a late home fightback.

The South Korea star opened the scoring in the 36th minute and then set up Lucas Moura to get Mourinho's men up and running, Harry Kane adding to the scoreline as Spurs climbed to sixth in the table.

Michail Antonio and Angelo Ogbonna netted late consolations but West Ham continue to struggle after a bright start to the season. Manuel Pellegrini's side have now lost six of their past seven Premier League games.

The first goals of the Jose Mourinho era...

Kane struck in the third minute of the Mourinho era but the striker had strayed offside from Dele Alli's pass.

Roberto was beaten twice before the break, though, Alli's pass freeing Son to shuffle away from Issa Diop and lash home a powerful left-footed strike.

Son then created the second after fine work on the left touchline by Alli, the forward crossing low for Lucas to get in front of Aaron Cresswell and nudge home from close range.

Lucas dragged a great chance wide after the restart but it was soon 3-0, Aurier given too much room on the right to measure a cross Kane met with a downward header to move into third place on Spurs' all-time top goalscorers' list.

Substitute Antonio gave the home fans something to cheer with a fine finish in the 73rd minute to deny Mourinho, who gave Eriksen a brief late cameo, a clean sheet.

And, after an offside Declan Rice was denied by VAR, West Ham scored a second deep into added time when Ogbonna beat Paulo Gazzaniga with a low shot from a corner, but it was too little, too late for the Hammers.

What does it mean: Mourinho off to a flyer

Mourinho could not have hoped for a better fixture to start with after replacing Mauricio Pochettino this week with West Ham low on confidence amid a poor run of form.

Spurs looked livelier than in recent weeks, but it is hard to judge their performance against a team lacking inspiration as pressure grows on Pellegrini. Firmer challenges are on the way for Mourinho and his new side.

Alli back to his best

Among the Spurs players to badly lose form in the latter period of Pochettino's spell in charge, Alli shone in a confident performance and regularly exploited space in the final third.

The midfielder has lost his England place but could fight his way back into Euro 2020 contention if he continues to impress.

Another costly error from Roberto

After woeful performances against Newcastle and Burnley before the international break, Roberto was at fault again. He has now conceded nine goals in his past three West Ham appearances deputising for the injured Lukasz Fabianski.

Son's opener was well-struck but very close to the goalkeeper's left hand and he continues to appear uncertain when dealing with crosses into the box, at one point punching team-mate Angelo Ogbonna in the head when trying to clear the ball.

- Having lost his first ever competitive game as manager, with Benfica in September 2000, Mourinho has gone unbeaten in his first game in charge at each of his eight clubs since, including two different spells with Chelsea (W5 D3).
- Mourinho won as many points today versus West Ham, as Pochettino mustered in his final 12 away Premier League games with Tottenham (W0 D3 L9).
- West Ham United have picked up just two points from their last 21 available in the Premier League (W0 D2 L5).
- Tottenham have won three consecutive away league games versus West Ham for the first time in their history.
- All four of Michail Antonio's Premier League goals for West Ham against Spurs have come at different venues - Upton Park, White Hart Lane, Tottenham Hotspur Stadium and London Stadium.
- Antonio is one of four players to score at four different venues for a single club against a single opponent in the Premier League, alongside Steed Malbranque (Fulham v Man City), Dele Alli (Tottenham v Watford), Christian Eriksen (Tottenham v Everton).
- Kane has scored eight goals in his last nine Premier League games versus West Ham. Indeed, Kane has scored 29 goals in 46 Premier League London derbies – only Thierry Henry (43), Teddy Sheringham (32) and Frank Lampard (32) have netted more goals in such games.
- Kane has now scored 175 goals in 269 appearances in all competitions for Tottenham - only Jimmy Greaves (266) and Bobby Smith (208) have netted more for the club.
- Son (19) is Tottenham's leading goalscorer in all competitions in 2019, netting one more than Harry Kane (18) so far this calendar year.

Mourinho's Spurs host Olympiacos in the Champions League on Tuesday before his first home league game in charge against Bournemouth four days later. Next Saturday sees West Ham play another London derby when they travel across the capital to Chelsea.