England Vs Pakistan, 3rd T20I, Live Streaming: When And Where To Watch ENG Vs PAK Cricket Series Finale

Check match and telecast details of the third and final T20I cricket match between England and Pakistan. Series is tied 1-1 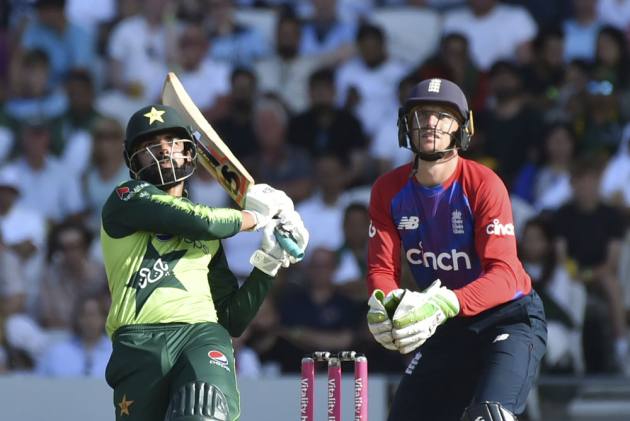 A second-string England handed Pakistan a 3-0 thrashing in the ODIs, but Babar Azam's side hit back with 31-run in the first T20I, only to see the hosts wrest back the initiative with a 45-run win in the second match. More Cricket News | ENG-PAK 3rd T20 Live Blog

Now, after five matches, the two teams meet in Manchester for a finale. The series has so far proved to be a high-scoring affair. In the first match, Pakistan set a 233-run target then dismissed England for 201 in 19.2 overs as the encounter resulted in 433 runs.

Azam scored a fluent 85 off 49, and added 150 for the first wicket in 14.4 overs with his opening partner Mohammad Rizwan, who scores a 41-ball 63. But they were trumped by Liam Livingstone, who scored a 43-103 in a losing cause. And more surprisingly, Pakistan pacer Shaheen Afridi took home the man of the match award for his three wickets.

In the second match, England set a target of 201 runs, with stand-in skipper Jos Buttler scoring 59 off 39. Livingstone once again played a crucial knock, hitting 38 off 23 balls. But it was Moeen Ali, who stole the show with an all-round show. He first scored 36 off 16, then claimed a couple of wickets as England restricted Pakistan to 155/9.

In their previous 20 meetings, England have won 13 times, while Pakistan six. One match was no result (Old Trafford, August 28, 2020).

England also led the series head-to-head record, 4-2. In the last series, they played out 1-1 in England.

England are looking for back-to-back series wins following their 3-0 win against Sri Lanka, while Pakistan are chasing a fourth win on the trot. They beat South Africa 2-1 at home, then beat the Proteas 3-1 away. And beat Zimbabwe 2-1, also away.

Playing XIs in the second T20I