For the seventh time in Test cricket, Anderson has dismissed Kohli - joint-most along with Australia's Nathan Lyon 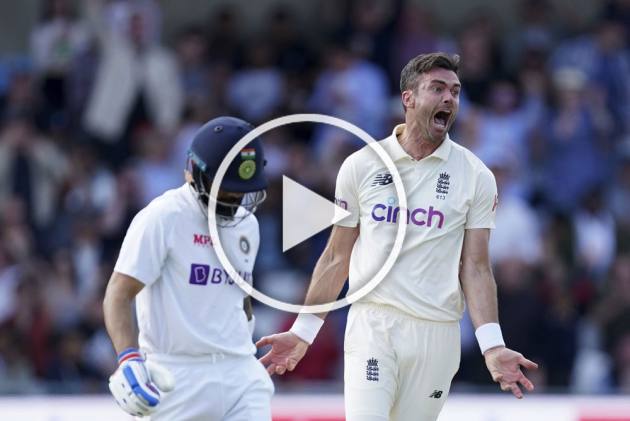 "I think so (it was special). We have had some great battles over the years. He is a fantastic player and someone you want to keep quiet as a team. Especially, in a five-match series, if he gets going he can be very disruptive," the 39-year-old said.

An animated Anderson was seen celebrating after getting the prized wicket of the Indian captain. This was the seventh time Kohli was dismissed by Anderson in Test cricket – joint-most along with Nathan Lyon.

We think @jimmy9 enjoyed this one! ðÂÂ¥

"I think the way we have bowled to him throughout the series has been very very good. We just got to keep doing that and keep him quiet as often as we can."

Anderson had dismissed Kohli for a golden duck in the first Test at Nottingham too.

Anderson also said that after all the trash talk during the Lord's Test, the focus at Headingley was to "shut the noise" and focus on the job, something that paid dividends after India were bowled out for 78 on the opening day.

India took a 1-0 lead riding on Jasprit Bumrah and Mohammed Shami's unbroken 89 run partnership for the ninth wicket after England bowlers got carried away against the tailenders on fifth morning.

"We have made a conscious effort of trying to just focus on us, on what we do well and try and ignore everything else, the outside noise or wherever they might be going on, and just yet and make sure there's a real focus on what we do well," Anderson said after the day's play.

He did admit that they had a chat in the dressing room.

"Yeah, I think there was a bit of chat about that. We were just making a point of trying to focus on what we do well,"

The veteran pacer was at his best (8-5-6-3) as he used the conditions to perfection to blow away India's top-order as India were knocked over for 78 in little over 40 overs.

In reply, England openers Haseeb Hameed (60) and Rory Burn (52) remained unbeaten as the scorecard read 120 for no loss with a lead of 42 runs after day one.

"In a performance like that, I think it doesn't get much better and the way the two guys played the day with the bat was outstanding, and exactly what we've been talking about throughout this series," he said hailing their opening duo's effort.