Born out of adversity in 1920, East Bengal grew on to become one of India's most successful clubs while forming an epic rivalry with the 131-year-old Mohun Bagan, whose tent lies few metres away 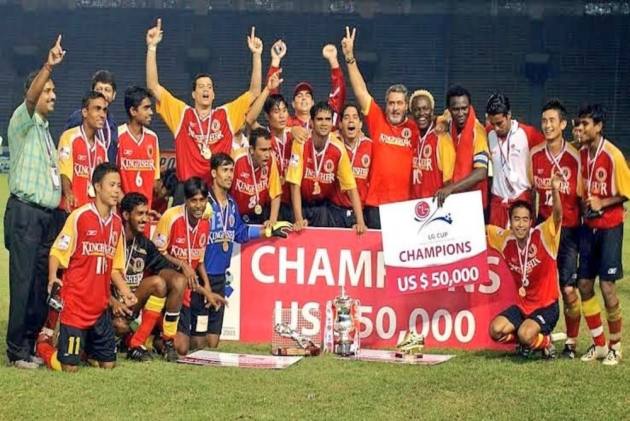 Legendary East Bengal duo Bhaichung Bhutia and Subhas Bhowmick on Saturday advised the iconic club to "accept things and move on" as it finds itself at a crossroads after 100 years of excellence.

Born out of adversity in 1920, East Bengal grew on to become one of India's most successful clubs while forming an epic rivalry with the 131-year-old Mohun Bagan, whose tent lies few metres away.

But without a sponsor the club is struggling to follow Mohun Bagan into the top-tier Indian Super League.

Bhutia, one of the most decorated players of Indian football, said ISL's "branding will only go up" by the inclusion of his former club.

"But if you are not in the ISL this year, if East Bengal missed out and they (Football Sports Development Limited) are not increasing the teams, and we don't get an investor, which we want, then we got to accept things and keep trying for the future."

Greeting the fans and club officials on a day it completes 100 years, the former Indian captain added, "I can only say the quality and branding of ISL is just going to go up if East Bengal come."

The 43-year-old picked the 2003 ASEAN Cup triumph and the 1997 Federation Cup semifinal hat-trick as his best moments with club.

Bhowmick, who was also the coach during the famous ASEAN Cup triumph in Indonesia, said East Bengal is undoubtedly the best club of India.

"Let any other club in India win a tournament on foreign soil and then talk about East Bengal," he said, summing up the current drama over the club not being able to make the top- tier ISL.

"Today, it's my humble appeal to club officials and fans that stop being sad and stop fretting about not able to play in ISL. If we have to play the I-League then so be it. But we will return triumphant."

The FSDL-owned ISL was accorded the top-tier status by AFC last year. The Asian governing body also asked the ISL to open a pathway for two I-League clubs' entry by the end of the 2020-21 season.

Former East Bengal captain Mehtab Hussain said they have to stay firm and positive even if they don't make the ISL this year.

"There should not be any regrets if we don't get to play in the ISL. We can still make the top tier league by qualifying through I-League," Mehtab, who played the 2013 AFC Cup semifinal in the East Bengal jersey, told PTI.

Recollecting the struggle and the circumstances under which the club was born, he said: "The club is all about struggle and emerging winners. We have done it in the past and we will do it again. We have a world wide fan base and they follow East Bengal like a religion."

Bengaluru-based Quess Corp, who had a 70 per cent stake in the club, terminated their tie-up on May 31 despite having a three-year deal.

Following their split, the century-old club have already got their sporting rights back but is yet to find a sponsor.

ISL organisers, on the other hand, have made it clear that they would stick to 10 teams for the upcoming season starting in November.

Blaming the COVID-19 pandemic for East Bengal's investor crisis, Mehtab said: "Mohun Bagan had finalised their deal (with ATK) before the pandemic. All the companies are struggling financially so it's getting difficult."

Mehtab had a productive time with East Bengal from 2007-2017, during which he was adjudged the best Indian footballer.

East Bengal had a low-key celebration at their Maidan tent this morning with West Bengal Sports Minister Aroop Biswas hoisting the club flag along with Bhowmick and other officials.

"It's about 100 years of legacy, so many sacrifices have gone into it. There is nothing that the club cannot do. No one can stop East Bengal," Biswas, who is one of the key figures helping the club in finding an investor, said.

"I would like to salute our founders who 100 years back had the vision to start a club called East Bengal," club president Pronab Dasgupta said.

The club was born out of angst as players from Eastern part of Bengal, now Bangladesh, faced discrimination in tournaments.

It all started with the infamous 1920 Coochbeher Trophy final between Mohun Bagan and Jorabagan Football Club.

Jorabagan decided to exclude two of its star players, Shailesh Bose and Nasha Sen, from the team owing to their Bangal ethnicity.

Infuriated, Jorabagan's vice-president, Suresh Choudhury, who himself was a descendant of Eastern Bengal, immediately decided to form a team of their own with the help of his lawyer friend, Tarit Bhushan Roy.

The club was formed on August 1 (Sunday), 1920 at Roy's house opposite Kumartuli Park.