Playing with their reserve side, Bengaluru FC struggled to cope with the energy-sapping humid conditions, failing to convert a flurry of chances and were held to a 1-1 draw by Army Red in their Durand Cup opener in Kolkata on Monday. 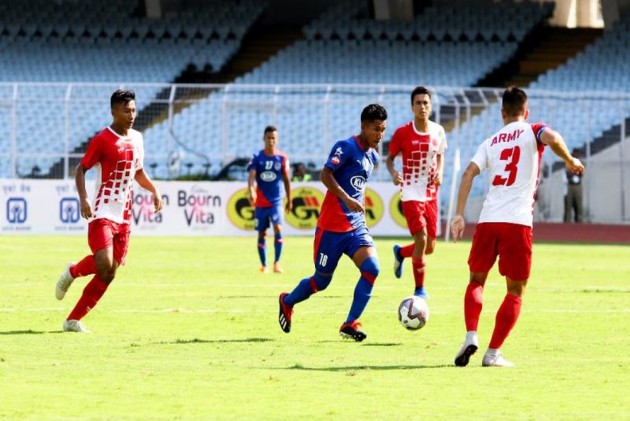 Bengaluru FC's new signing Suresh Wangjam converted from the spot in the 81st minute to help his side salvage a 1-1 draw against Army Red in the 129th Durand Cup in Kolkata on Monday.

Playing with their reserve side, the Indian Super League champions struggled to cope with the energy-sapping humid conditions, failing to convert a flurry of chances as Army Red forward Liton Shil gave them the lead at the stroke of half time.

Bengaluru FC earned a penalty when defender Namgyal Bhutia was brought down in the rival box by substitute Alwin E.

Suresh stepped up and calmly slotted the spot kick home to level scores in what was his first appearance in a Blue shirt.

"It's first match for me and I'm happy about the goal but I would have been much happier had we won the game," the Manipuri, who is a product of the AIFF Academy, told PTI.

The point meant Bengaluru FC moved up to second on the table behind leaders East Bengal (3 points) and ahead of Army Red (1 point) in Group A. They next face the city heavyweights in a do-or-die clash on August 14.

"In Bengaluru it's pretty cold while it was very difficult to play an afteroon game with so much of heat and humidity. I don't want to give any excuse. We will give everything to win our next match," he said.

Naushad Moosa opted to start all of his seven first-team players with Aditya Patra in goal, Gursimrat Singh Gill, Sairuat Kima and Parag Shrivas in defence, Ajay Chhetri and Suresh Wangjam in the midfield and Edmund Lalrindika leading the attack.

In what turned out to be a game of equal exchanges, it was the Blue Colts who dominated majority of the proceedings in the first half.

After a couple of close chances that fell for striker Edmund in the opening quarter, the Blues almost took the lead in the 22nd minute.

Medio Biswa Darjee unleashed a powerful left-footer from 25 yards out which came off the crossbar after a spell of dominant play in the rival half.

With the Blue Colts controlling possession for longer periods, the Army Red side banked on frequent counter attacks.

Patra pulled off a wonderful save when he denied rival skipper Suresh Meitei from point blank range in the 38th minute when the Army man was left unmarked in the BFC box.

Despite their dominance, the Blue Colts conceded when attacker Liton Shil struck in the fourth minute of first-half injury time.

Defender Sunil B created space on the left flank before sending in a low cross into the box to find Liton who scored on the slide, past a helpless Patra.

A goal down, Moosa decided to make his first change sending on midfielder Emanuel L in place of Chhetri as he looked to add more attacking threat.

Four minutes after their equaliser from penalty, Bengaluru had a great chance to kill the game in the 85th minute when Suresh set on a counter down the right.