Deportivo Alaves 0-5 Barcelona: Lionel Messi Shines As Barca Show What Might Have Been 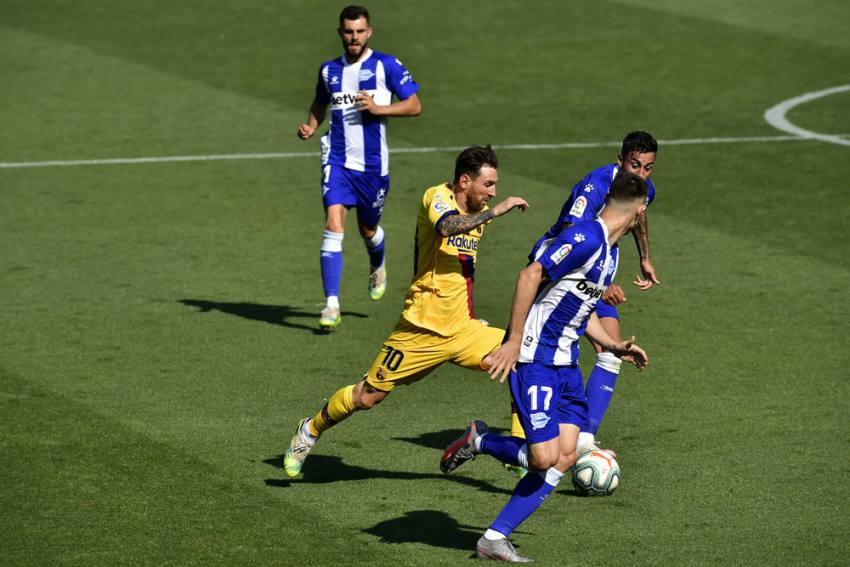 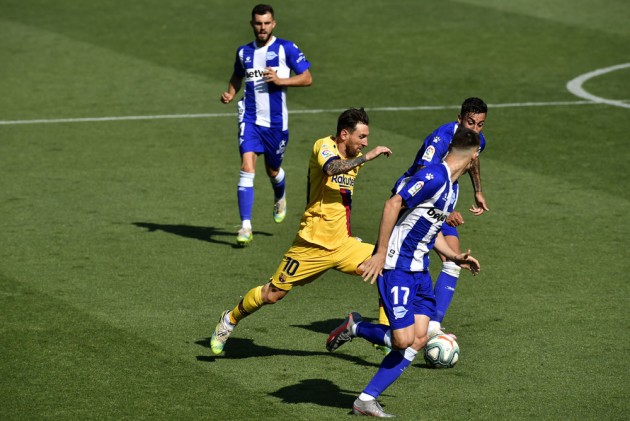 Title winners in Spain for each of the past two years, Barcelona surrendered their crown to Real Madrid this season and there might be fallout from that setback still to come.

At Alaves, however, it was a case of Barcelona showing they remain the most watchable team in Spain when they find their rhythm, a double from Messi and further goals from Ansu Fati, Luis Suarez and Nelson Semedo doing the damage.

Barcelona threw away their lead in the title race after a handful of post-lockdown draws allowed Madrid to steal a march and losing to 10-man Osasuna on Thursday reflected their misery, leading to questions being asked about coach Quique Setien's future. On Sunday, it was a thoroughly different story.

The visitors had already hit the Alaves goal frame three times, through Riqui Puig, Arturo Vidal and Messi, before they took a 24th-minute lead through Fati.

Messi was the creator, with his cross from the right having the sting slightly taken out of it by a minor deflection before dropping perfectly for Fati to crack into the bottom-right corner.

The second goal in the 34th minute came when Barcelona burst at pace and located their talisman in the centre of the penalty area.

Puig dutifully laid the ball into Messi's path from the left, and after shimmying delightfully to deceive goalkeeper Roberto Jimenez, the Argentinian stroked the ball home from close range.

Vidal had a header well saved by Roberto from Messi's terrific cross, before Suarez made it 3-0 in the 44th minute, nodding home after great link-up play from Messi and Jordi Alba.

Semedo replaced the injured Clement Lenglet early in the second half and left his defensive station to surge into the Alaves box and smash home a fourth goal in the 57th minute.

Messi guided home a cross from Alba in the 75th minute, and suddenly Barcelona were all smiles.

What does it mean? Not the time to judge Setien, or Barca

Deriving meaning from an end-of-season drubbing is a fool's game. Alaves let Barcelona trample all over them, and despite the visitors duly turning on the style, it was too late for that in the grand scheme. Setien's fate, one would assume, will be determined by Barcelona's Champions League progress.

A final-day double took Messi's tally to 25 goals in 33 LaLiga appearances this season. His standards have stayed typically high and, while team-mates around him gaze in awe and appreciation of those qualities, he expects them to raise their own games in turn. It has not happened often enough this term.

Alaves on the beach

It really was a miserable showing by the hosts, who have had a dismal time of things since football resumed in June. From a steady mid-table footing, a rush of defeats sent them tumbling in the direction of the bottom three, and new coach Juan Muniz would surely have been disheartened by what he witnessed on the final day.

For Alaves, a holiday of sorts awaits before the 2020-21 LaLiga season. Barcelona, however, have a Champions League campaign to resume, with the second leg of their last-16 tie against Napoli due to take place at Camp Nou on August 8.