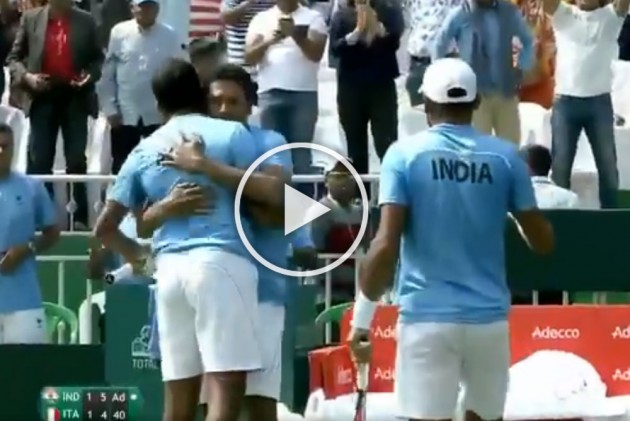 Doubles pair of Rohan Bopanna and Divij Sharan rallied from one set down to beat Italians Matteo Berrettini and Simone Bolelli 2-1 and keep Indian hopes alive in their Davis Cup Qualifier at Calcutta South Club, Kolkata on Saturday.

After losing the first set 4-6, the Indian pair won the next two 6-3, 6-4 in one hours and 43 minutes. India now trail Italy 1-2 after the visitors won both the singles matches.

India's gamble of playing on grass seemed to have back-fired as Italy lived up to their reputation to win both the singles on Day 1.

Andreas Seppi experienced some early hiccups before getting past Ramkumar Ramanathan 6-4 6-2 in the opening singles, while 22-year-old Matteo Berrettini made a winning Davis Cup debut, cruising past India number one Prajnesh Gunneswaran 6-4 6-3.

With 0-2 down, Indian pair needed to win the match. And living up to their reputation, Bopanna and Sharan beat Bolelli and Berrettini in the must-win match.

Later in the day, Ramanathan will play Berrettini while Gunneswaran faces Seppi in the reverse singles.