Cricket World Cup, India Vs Pakistan: How Has Virat Kohli Performed Against Pakistan In ODI Format?

Cricket World Cup's India Vs Pakistan takes place on June 16, in Manchester's Old Trafford. Virat Kohli will be his side's talisman. He has faced the Green Army 12 times in the ODI format.

With Cricket World Cup's India Vs Pakistan fixture finally nearing its scheduled date of June 16, cricket fans have gone into a state of frenzy, with social media in meltdown. The match will be played in Old Trafford, Manchester. The fixture will be having a few key players, and one such man is Virat Kohli. How has he performed against his country's eternal rivals in the ODI format?

Well, the Men in Blue skipper has played 12 fixtures against the Green Army. In 12 innings, the Royal Challengers Bangalore player has registered two centuries, and a fifty. He has not been bowled in two instances, while he has also been dismissed once without having scored a run. 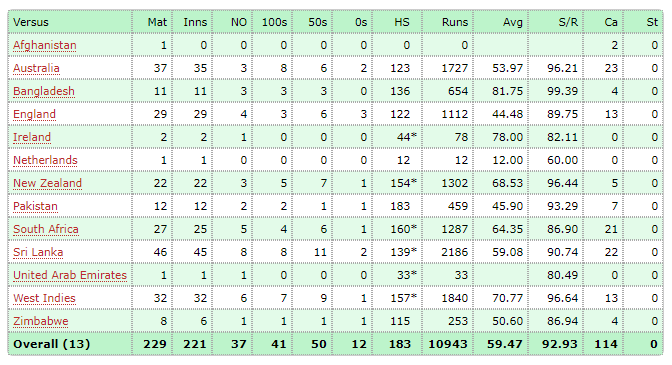 His highest score against Pakistan is 183, which was in 2012, in Pakistan's Shere Bangla National Stadium.

Meanwhile, in the fielding department, Kohli has contributed in seven catches.

Kohli's Pakistan debut was on September 26, 2009, when India travelled to SuperSport Stadium. He made 16. He was dismissed in a Shahid Afridi over, while his shot was caught by Umar Gul.

In his most recent encounter against them in June 2017, Kohli was bowled after making five runs. His wicket was notched by Mohammad Amir, and caught by Shadab Khan.