Aston Villa beat Chelsea on the final day of the season, but the Blues qualified for the Champions League regardless thanks to Leicester City losing 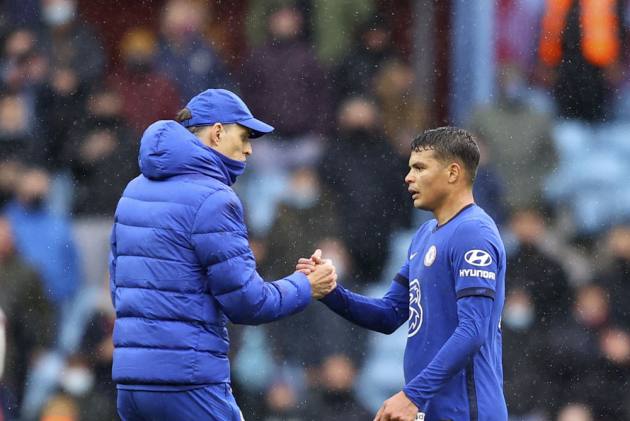 Chelsea will be back in the Champions League again next season after securing a fourth-placed finish in the Premier League despite losing 2-1 at Aston Villa on the final day of the campaign. (More Football News)

Thomas Tuchel's side, who went into the weekend third, looked to be facing the tricky position of needing to win the Champions League just to qualify for it in 2021-22, but Tottenham rescuing a late win at Leicester means Chelsea pipped the Foxes to fourth by a point.

Chelsea had the better chances in a first half they largely controlled but went into the break trailing as Bertrand Traore, who spent four years at the club, netted from a well-worked corner.

Clever play from Traore then earned Villa a penalty, which Anwar El Ghazi scored, early in the second half and that proved to be the winner as all Chelsea – who had Cesar Azpilicueta sent off late on – could muster was a Ben Chilwell goal.

Nevertheless, Leicester's inability to take advantage of Chelsea's slip-up ensured Tuchel's side will be back at Europe's top table next season regardless of their result in the Champions League final next weekend.

Narrow defeat at Villa Park, but results elsewhere mean we qualify for the Champions League next season. #AVLCHE pic.twitter.com/fOQ1pmVEsQ

Given the onus was on Chelsea it was unsurprising to see them dominate the ball in the first half with 68 per cent possession, and they did create chances: Mason Mount first smashing a volley over before then sending another just wide.

But Villa started to look a little more at ease as the half-hour mark approached and the breakthrough finally arrived just before half-time, Chelsea's position in the top-four race suddenly becoming a worry.

Traore met Matt Targett's low corner with a scuffed volley into the ground and it bounced in off the crossbar with results elsewhere not in the Blues' favour at the time.

Chelsea suffered the blow of losing goalkeeper Edouard Mendy at half-time and his replacement Kepa Arrizabalaga had an early opportunity to inject some hope as Villa were awarded a penalty, Traore again the inspiration as he was caught by Jorginho having flicked the ball through his legs.

Kepa was powerless, however, with El Ghazi confidently sweeping home the spot-kick as Leicester went ahead against Tottenham almost simultaneously.

Timo Werner tapped in at the other end soon after only for the goal to be disallowed for an offside in the build-up, though Chelsea did pull one back 20 minutes from the end when Chilwell knocked in Christian Pulisic's low cross.

But as Spurs surged into a 4-2 lead at the King Power Stadium, Chelsea were able to relax in the latter stages, though not before Azpilicueta was dismissed for catching Jack Grealish in the face with a swipe of the hand.

What does it mean? Chelsea breathe a collective sigh of relief

For a while there it looked as though Chelsea were going to need to win the Champions League final just to qualify for the competition again next season – granted, they beat Manchester City recently, but Pep Guardiola's champions were much-changed on that occasion.

That meant there was a very real possibility of the Blues missing out on the Champions League altogether in 2020-21, with Leicester going 2-1 up over Spurs early in the second half.

But of all the teams to do Chelsea a huge favour it was their London rivals. Tuchel will know just how fortunate his team have been here, however.

Traore decisive against his former club

The fact Villa won this match may well get lost amid all the inevitable post-match talk regarding Champions League qualification, but it was a commendable victory that ensures they finish 11th, a real accomplishment given their flirting with relegation last year.

Key to the victory was, of course, Traore. His goal – from a smartly worked corner – and lovely touch to win the penalty did the damage, while his three shots was also a high among Villa players.

Chelsea were far from their best here and were particularly wasteful in front of goal, as evidenced by the fact only seven of their 23 shots were on target and they netted just once from 3.3 expected goals (xG), but it is difficult to look beyond Jorginho's performance as one of the main negatives.

The defensive midfielder won just 25 per cent of his eight duels, only better than Werner among Chelsea's starters, while he conceded the most fouls (three) including the penalty that ultimately proved to be the winner.

While Villa's commendable season is over, Chelsea now turn their attention to the small matter of that Champions League final against City on Saturday.