Indian boxer Vijender Singh defeated Mike Snider on his debut in the US professional circuit. 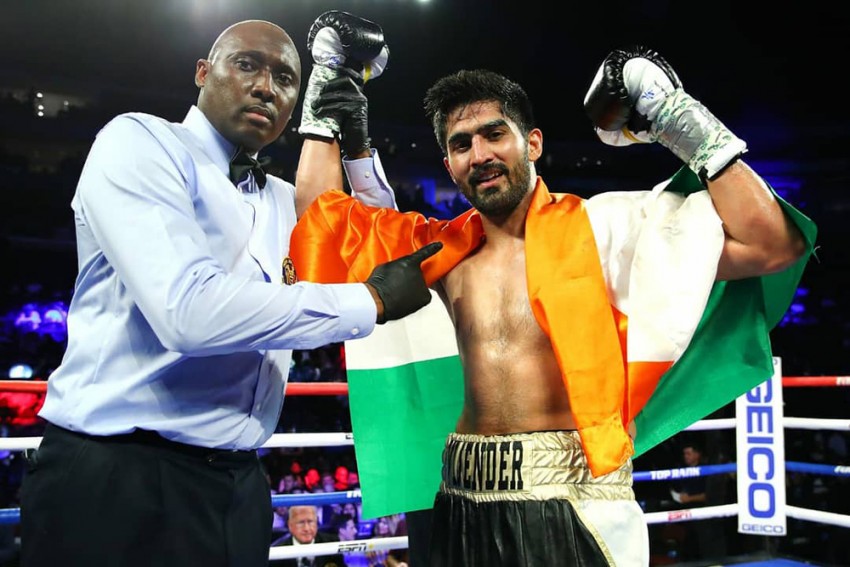 The triumph came in the second minute of the fourth round when Vijender cornered Snider with a flurry of straight punches, prompting the referee to stop the bout in the Indian's favour.
Twitter
Outlook Web Bureau July 14, 2019 00:00 IST Vijender Singh Continues Winning Streak In His Professional Boxing Debut In US 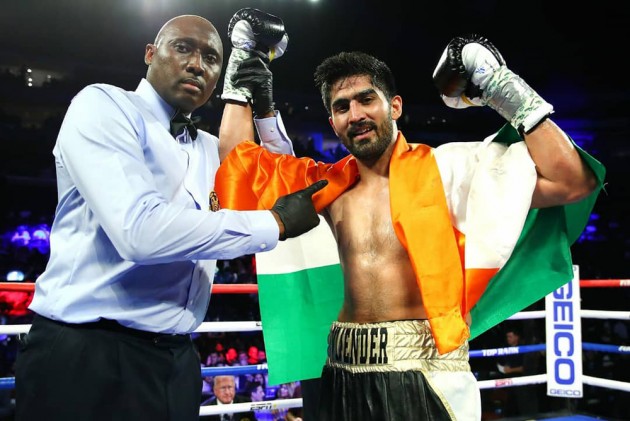 Ace Indian Vijender Singh seems unstoppable. On Saturday night, the World Boxing Organisation (WBO) Oriental and Asia Pacific Super middleweight champion registered his 11th consecutive pro-boxing bout as he landed a flurry of punches on American Mike Snider, sending him reeling on the ropes, before the referee stopped the fight in the fourth round at Prudential Centre in Newark, New Jersey.

The technical knockout win was 33-year-old Vijender’s eighth knockout victory of his glorious, unbeaten pro-boxing career so far. It was his maiden and memorable bout in the USA.

“It was excellent getting back in the ring after a long time off. It’s great to be here in the USA and to get the win. It was really exciting. I am really happy for my winning debut in USA. It took me about four rounds to get back in the swing of things. I expected it to take two or three rounds, but it took me four. I felt good,” said a triumphant Vijender.

The days leading up to the Snider bout were both hectic and eventful for the handsome Vijender. The Biwani boy unsuccessfully contested Lok Sabha elections from South Delhi on a Congress ticket. But before the result was declared, he became father for a second time, with wife Archana, who he married in 2011, giving birth to a baby boy. Their first son, Abir, was born in 2013.

Snider admitted he underestimated Vijender. “Vijender is a good boxer and I believe I underestimated his experience and technique. It was his day and he had won. I had never thought that I would lose in early rounds from him,” he conceded after the defeat.

Neerav Tomar, promoter, IOS Boxing Promotions, under whose banner Vijender is fighting, said: “It’s a great start for Vijender in the USA and we will now look forward to some bigger fights.”

Looking ahead to his next pro-bout, Vijender said: “Top Rank has a bigger plan for me, and whatever they say is next, I’m fine with.”

Trainer Lee Beard sang paeans of Vijender. “I am happy that after a long gap Vijender is finally back in good shape and action in the ring. His dedication and commitment helped him to register debut victory in US. We will now look forward to have bigger plans for him,” he said.

Vijender had turned professional in 2015, having earlier become the first ever Indian to win an Olympic medal in boxing at the 2008 Beijing Olympic Games. He defeated Carlos Góngora of Ecuador 9-4 in the quarter-finals to clinch bronze medal in middleweight. The next year, he won middleweight bronze at the World Championship in Milan. In 2010, he roared louder and won the Guangzhou Asian Games gold in the same weight category – the pinnacle of his amateur career.

Vijender was conferred the Rajiv Gandhi Khel Ratna, the highest sports award of India, and Padma Shri, the fourth highest civilian honour of the country.