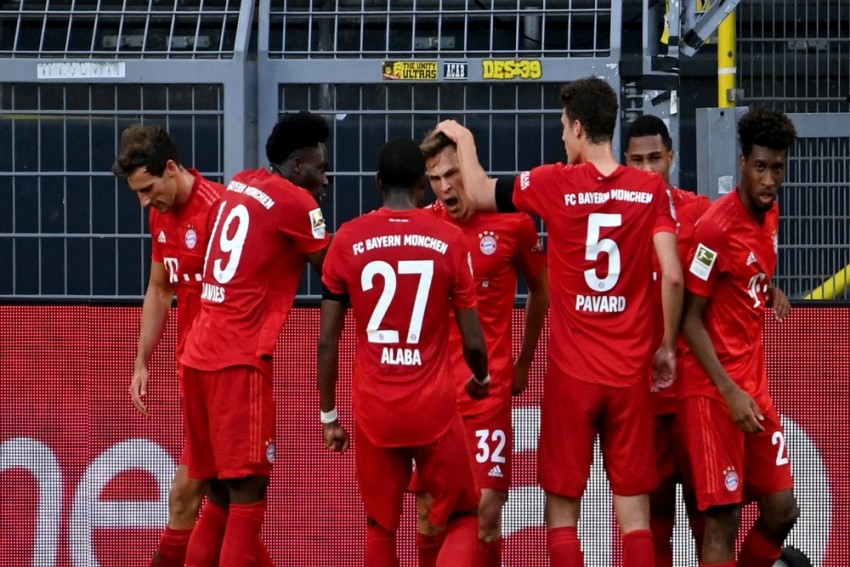 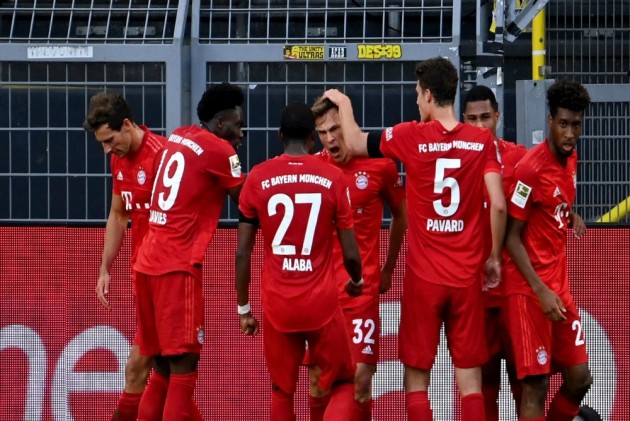 Bayern Munich moved seven points clear of Borussia Dortmund at the top of the Bundesliga thanks to a magical Joshua Kimmich strike in Tuesday's 1-0 Klassiker victory.

Both teams had previously won six league games in a row in a tightly contested title race, but it was Bayern who prevailed in the behind-closed-doors clash at Signal Iduna Park.

Kimmich scored what proved to be the only goal just before half-time with an audacious chip from 20 yards, which Roman Burki was unable to keep out despite getting a hand to it.

Dortmund, who lost striker Erling Haaland to injury in the second half, had a penalty shout rejected and saw Mahmoud Dahoud come close late on but ultimately could not find a way through.

The hosts came into the game boasting the best home record in the division this term and would have been ahead inside 29 seconds if not for Jerome Boateng, who bailed out Manuel Neuer - making his 400th Bundesliga appearance - by blocking Haaland's shot on the line.

Serge Gnabry was given the nod over Ivan Perisic in Bayern's attack and he was next to come close, the winger firing a shot past Burki but not covering defender Lukasz Piszczek.

But the visitors found the breakthrough two minutes before the interval thanks to Kimmich's moment of magic, the versatile German midfielder spotting Burki off his line and chipping the ball over the Dortmund keeper from just outside the box.

Dortmund sent on Jadon Sancho for the second half and felt they should have had a penalty when Haaland's shot caught Boateng on the arm, but the decision was not reviewed by VAR.

Dahoud was then denied by Neuer in the best of the home side's second-half chances, with Bayern coming closest to adding a second when Robert Lewandowski - who also had a penalty appeal of his own rejected - sent a curled shot against the post.

What does it mean? Title race all but over

A victory for Dortmund today would have heaped the pressure on Bayern, but the league leaders now have a seven-point lead at the top with just six games to play.

Hansi Flick's side still have to face Bayer Leverkusen and Borussia Monchengladbach, but an eighth Bundesliga title in a row now seems a formality.

15/18 - Hansi #Flick has won 15 out of his first 18 #Bundesliga games in charge of @FCBayernEN, the only other manager to do so was #Pep Guardiola. Decisive? #BVBFCB pic.twitter.com/2vr1AtbbhN

Dortmund had conceded just one goal in their past six league matches ahead of this contest, so it was always going to take something special for Bayern to find a way through.

Step forward Kimmich, who spotted Burki off his line and produced a quite sublime chip to win the match - his third Bundesliga goal this season, all from outside the box.

If the defeat itself was not bad enough for Dortmund, they lost influential striker Haaland to injury 18 minutes from time.

He may have gone back-to-back games without scoring, following a previous run of 10 in nine league matches, but his loss will be felt if the injury is serious.

Bayern host strugglers Fortuna Dusseldorf on their return to action on Saturday, while Dortmund travel to bottom side Paderborn the following day.