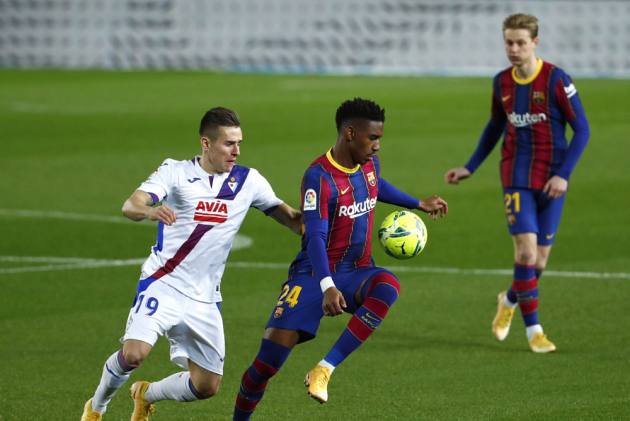 Ronald Koeman's Barca were held to back-to-back draws at Camp Nou after Eibar striker Kike capitalised on Ronald Araujo's error before substitute Ousmane Dembele scored an equaliser for the hosts.

With superstar captain Messi absent due to an ankle injury, Martin Braithwaite missed a penalty as Barca fired in 16 shots, including five on target, against the LaLiga strugglers.

Goalscorer Dembele was guilty of hitting a tame shot when clean through on goal, while Braithwaite and substitute Francisco Trincao spurned chances to net a late winner.

Antoine Griezmann was the only player in Barca's starting line-up with more than two league goals in 2020-21 but the recalled forward was unable to add to his three goals from 14 outings.

"We need a thousand chances to score," Barca defender Junior said via Marca.

"They [Eibar] had one clear chance and scored."

Junior added: "It's the trend of the season.

"The games are tough and it's all uphill."

However, the 24-year-old left-back Junior was more than happy with his own performance after combining with Pedri to set up Dembele for Barca's 67th-minute leveller.

Junior made his first league start of the season against Eibar in relief of veteran full-back Jordi Alba.

"I felt good," Firpo said. "It's noticeable when you don't play so often, but I always try to train to the fullest.

"When I get a chance I try to take advantage of it."

Barcelona travel to face bottom side Huesca in their first match of 2021 on January 3.