Novak Djokovic and Dominic Thiem are both through to the last 16, but the Austrian looked to be in better shape after his triumph. 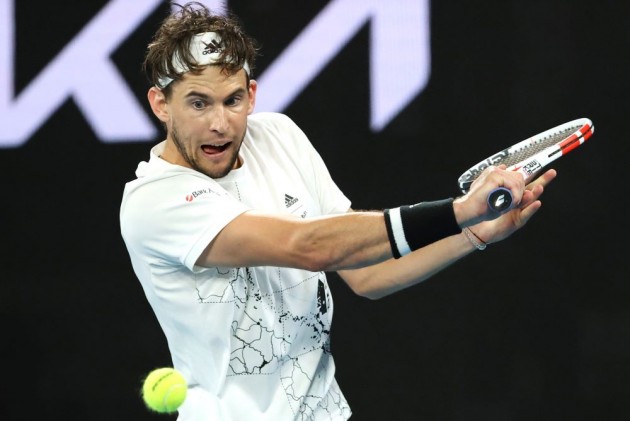 Dominic Thiem believes prevailing in an incredible contest against Nick Kyrgios will boost his chances of Australian Open glory and concedes he was almost "on his way home".

He will play Grigor Dimitrov in the last 16 and will have watched Novak Djokovic struggle with injury as the world number one ground out his own five-set triumph over Taylor Fritz in round three.

Thiem said: "It was an epic match, huge effort from both players actually.

"Honestly I was already almost on my way home when I faced two break points in the beginning of the third set.

"It's one of the tougher challenges out there in tennis to face Nick when he's on fire on his favourite court with an unbelievable atmosphere and crowd behind him.

"So I'm super proud how I got through it, and definitely gives me a big boost for everything what's coming.

"One reason I think why I didn't play well, I never faced him. His serve is amazing. It's so accurate, tough to read. It was very, very difficult for me in the beginning.

"And then if he plays great like this, on fire, you're constantly under so much pressure in your own serve.

"So it's definitely not easy, and I'm happy that I went through that experience."

"Giving up is never an option, there is always a chance"@ThiemDomi's spirit was never broken  #AO2021 pic.twitter.com/I797JvA14S

Kyrgios was proud of his efforts having had a year out of tennis prior to his return this month.

"Yeah, definitely [proud]," said the Australian, who said he had not made firm plans for how much more he will play for the rest of 2021.

"Again, it was an amazing atmosphere. The energy out there was special.

"I took 13 months away from the game, and to produce that level and go toe to toe with one of the best players in the world.

"I left it all out there. I actually physically felt pretty good. I'm sore now.

"Good luck to him, I hope he does well because he's a hell of a player"

"He's a hell of a player. He's so disciplined, so composed. His level doesn't drop. It is what it is.

"Couple points in it. I'm not disappointed at all. I'm super proud of everything I've done the last couple of months to get ready for it.

"Good luck to him. I hope he does well, because he's a hell of a player."

Dimitrov had won the first seven games of his match with Pablo Carreno Busta before the Spaniard was forced to retire and Milos Raonic won in four sets against Marton Fucsovics.

"It was a good match," said Zverev.

"I thought I tried to play extremely aggressive, tried to use my chances, and I'm happy with the win.

"The last few times I played Adrian it was always a very long match, always a very tough match, and happy to kind of get the straight-set win."

In round four the German will face Dusan Lajovic, who battled back to win in four sets against Pedro Martinez.

The Russian had 50 winners to just five from Schwartzman, who made the French Open semi-finals last year.

"I didn't feel really good," said the beaten Argentine. "It was a difficult match.

"He was playing amazing tennis. Too many winners. I saw 50, I think, hit in the match. And again me, I'm playing good tennis. 50 winners, I think it's a lot.

"I didn't serve well. Maybe that was one of the keys in the match because he was really comfortable doing returns. He did everything better than me and deserved to win."

Karatsev will meet 20th seed Felix Auger-Aliassime in the last 16.

Auger-Aliassime saw off his fellow Canadian, the 11th seed Denis Shapovalov, 7-5 7-5 6-3, having lost the previous two grand slam meetings against his compatriot.