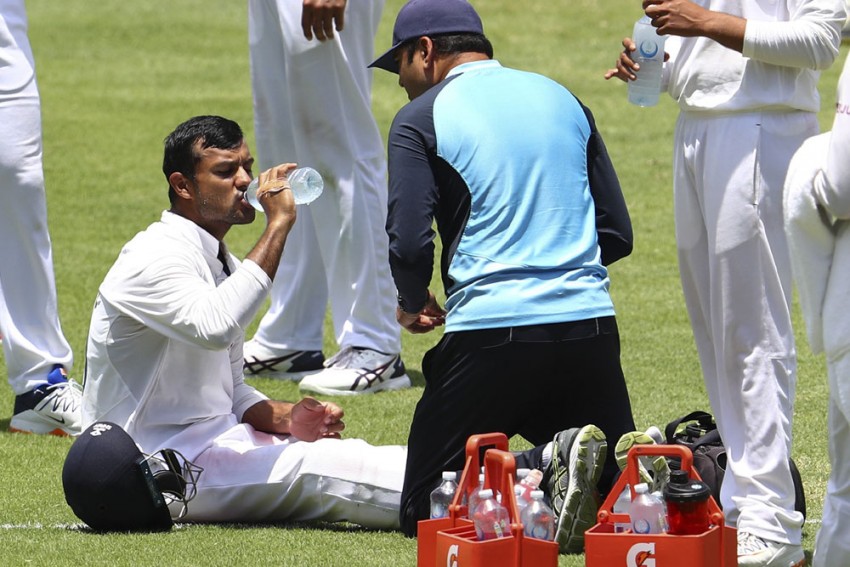 India's Mayank Agarwal is treated after he was hit while fielding during play on day four of the fourth Test against Australia at the Gabba, Brisbane
AP Photo/Tertius Pickard
PTI 2021-01-18T07:55:51+05:30 AUS Vs IND, 4th Test, Day 4: India Strike Back To Reduce Australia To 149/4 At Lunch 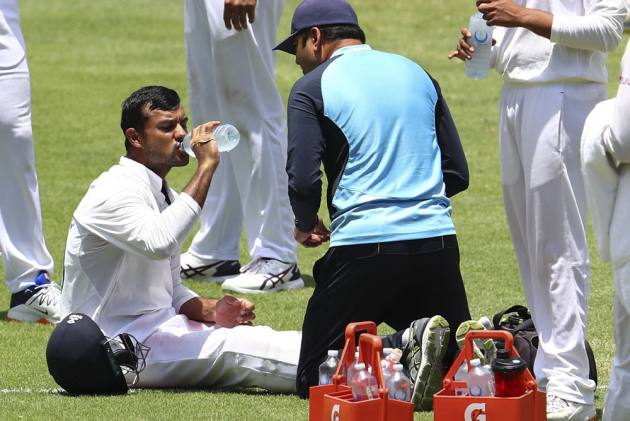 A rookie Indian attack was back in its element with four strikes in quick succession as Australia were pegged back to 149 for four at lunch after a brisk 89-run opening stand between David Warner and Marcus Harris on the penultimate day of the fourth Test at The Gabba, Brisbane.

Australia's lead is now 182 runs and the match is tantalisingly poised with Tim Paine's men desperate for a sporting declaration, factoring in the inclement weather and the resistance shown by the Indian batters during the series.

The left-handed duo of Warner (48 off 75 balls) and Harris (38 off 82 balls) scored at a quick clip before both departed in successive overs bowled by Shardul Thakur (8-1-28-1) and Washington Sundar (11-1-38-1), who also checked the run-flow after initial pressure on the visitors at the start of the day.

Marnus Labuschagne (25 off 22 balls) didn't let the tempo down before Mohammed Siraj (11-3-37-2), after an indifferent first spell, kept one up and the edge flew to Rohit Sharma at second slips.

Matthew Wade (0)'s leg-side tickle was snapped by Rishabh Pant as the home team slipped to 123 for 4 from 89 for 0. Steve Smith (28 batting, 38 balls) also scored at a quick clip during that session.

Finally, it was a sharp bouncer from Thakur, that ended Harris' entertaining knock as he tried to sway away but the ball brushed his gloves on the way to Pant behind stumps.

In the very next over, Warner, who was in sight of his first half-century of the series was rapped on the backfoot by Washington who bowled one that kept straight with opener cramped for room on the back-foot while going for the cut-shot.

Labuschagne hit five boundaries and was in no mood to drop the tempo before Siraj bowled the ball of the session.

Having been too short during the first spell, the delivery was on off-stump and moved a shade in which forced the first innings centurion to just push at the delivery.

For the record, the highest fourth innings chase at the Gabba is 236 by the West Indies, way back in 1951.

Australia will be looking at a total which the Indian team finds enticing enough to chase and not put the shutters down and play for a draw to retain the Border-Gavaskar Trophy.