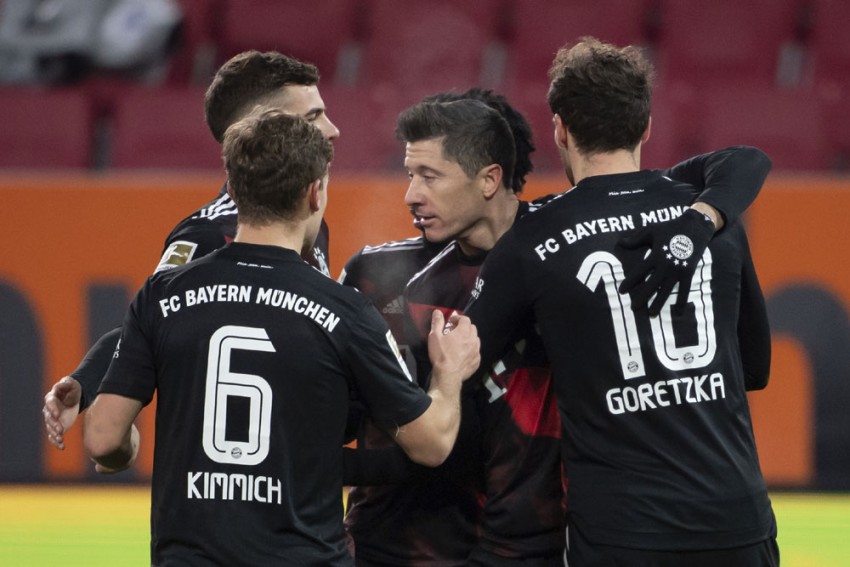 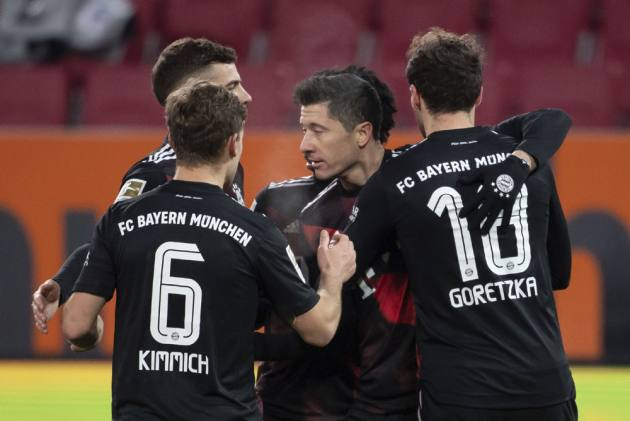 Bayern Munich's luck was in as a story of two penalties was the main tale in their 1-0 win over Augsburg in Tuesday's Bundesliga contest. (More Football News)

Robert Lewandowski calmly slotted home from the spot after 13 minutes at Augsburg Arena and missed a glut of chances in a first half dominated by the champions.

It was a completely different outlook for Bayern after the break, though, and Hansi Flick's side were left breathing a sigh of relief when Alfred Finnbogason struck the post with a penalty of his own 15 minutes from time.

The end result means Bayern remain four points clear at the top but Flick will want to see fewer of the Jekyll-and-Hyde performances that have been on display in recent weeks from his side.

Rani Khedira's clumsy kick on Lucas Hernandez allowed Lewandowski to find the bottom-right corner with a cool 13th-minute penalty that looked like setting the tone for a dominant win.

Serge Gnabry was denied by the busy Rafal Gikiewicz and Thomas Muller put the rebound narrowly wide as Bayern peppered the hosts' goal.

Gnabry was kept out again by Gikiewicz before teeing up Lewandowski, who was guilty of wastefulness a couple of times, with the Pole only hitting the outside of the post with the goal gaping.

A second half completely at odds with the first saw Bayern struggle to create openings and Daniel Caligiuri's long-range effort would have briefly had away hearts in mouths before rising comfortably over.

There was an even greater left-off shortly after when substitute Finnbogason fluffed his lines from the spot after Benjamin Pavard had been pinged for handball from Iago's flick in the area.

Muller had the ball in the net but Jamal Musiala clearly ran the ball out in the act of setting him up, before Florian Niederlechner skewed wide and Felix Uduokhai headed over in further late scares that a lacklustre Bayern ultimately survived.

What does it mean? A rare clean sheet but Bayern fail to convince

There will be a bit of relief for Flick after this one given Bayern's last Bundesliga clean sheet came back in the 5-0 battering of Eintracht Frankfurt in October.

Bayern conceded in the next 11 league games and really should have done here too. Two nervy wins following defeat to Borussia Monchengladbach and a shock DFB-Pokal exit only mask the fact this side is playing way below the stunning treble-winning levels of 2019-20 right now.

Gnabry lasted just 28 minutes in the workmanlike 2-1 beating of Freiburg last time out but fortunately for Bayern the injury was not serious.

The winger was brilliant particularly in the first half here and finished with three shots, a key pass, three crosses and 89.7 per cent pass completion.

Lewandowski now has a phenomenal 22 Bundesliga goals for the season but the Pole could feasibly have had at least three goals before the break.

The usually prolific striker had four shots and two key passes but a player of his ridiculous talent will have expected more and he was surprisingly hauled off after 67 minutes.

- Lewandowski added to his record-breaking tally of goals in the first half of the season (now 22).
- He has also scored in seven consecutive away Bundesliga games, equalling the Bundesliga record held by four players (most recently by Sean Dundee in 2002-03).
- Three of Lewandowski's last five Bundesliga goals came from the penalty spot. In total, he has taken five penalties this season and converted all of them. Just as many as last season.
- Manuel Neuer equaled Oliver Kahn’s all-time record of 196 clean sheets in Bundesliga. Neuer needed only 422 games while it took Kahn 557.
- With this win, Bayern tallied 39 points from the first half of the season. They reach this mark for the 12th time and only once before did they not go on to win the title in the end (1980-81 when they also had 39 points).

Bayern will hope for a more convincing performance when they visit struggling Schalke on Sunday, while Augsburg host Union Berlin a day earlier.

Return Of Virat Kohli And The Elephant In Indian Dressing Room