Captain Joe Root and veteran bowler Stuart Broad produced inspirational displays as England defeated Australia to draw the Ashes 2019 with a 135-run win in the fifth and final Test at The Oval, London On Sunday. But the Aussies kept the urn 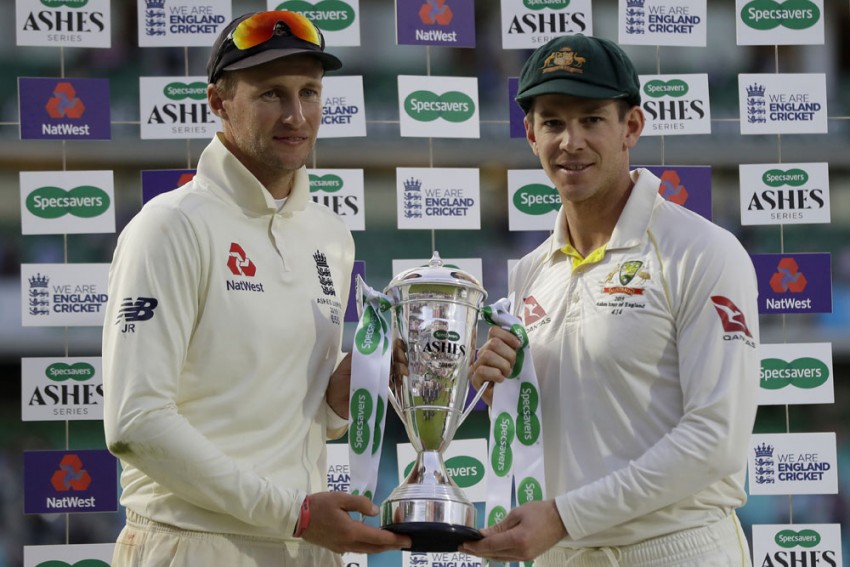 England's Joe Root, left, and Australia's Tim Paine hold the trophy during the presentation ceremony on the forth day of the fifth Ashes cricket test match between England and Australia at the Oval cricket ground in London, Sunday, Sept. 15, 2019. England won the fifth test by 135 runs to draw the series but Australia will retain the ashes trophy.
AP Photo
Omnisport 2019-09-16T00:06:52+05:30 Ashes 2019 Finale, ENG Vs AUS: England Beat Australia By 135 Runs To Draw Series 2-2; Urn Goes Down Under 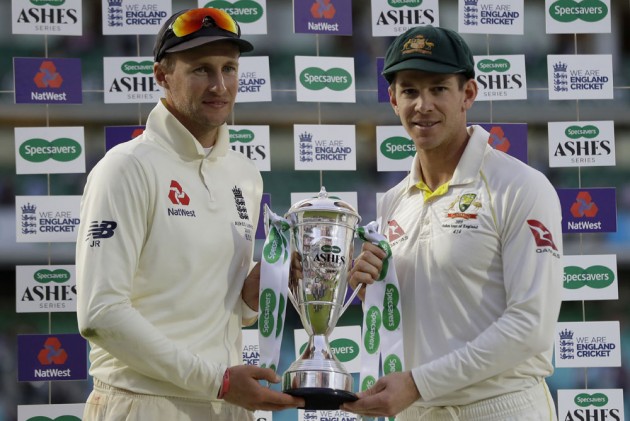 England clinched the fifth and final Ashes Test by 135 runs on Sunday to draw the series in a fine response to Australia retaining the urn.

Another Steve Smith masterclass saw the tourists move 2-1 in front at Old Trafford to ensure the Ashes would be heading back to Australia, yet they could not end an 18-year wait for a series win in England.

Joe Root's side dominated at the Oval this week and Australia scarcely looked like troubling the target of 399 they were set when the hosts were bowled out early on day four.

Stuart Broad was in excellent form and, as well as continuing to dominate against the openers, he got the crucial wicket of Smith for a relatively paltry 23.

That set Australia up for a long, hard chase and Matthew Wade did the heavy lifting with a knock of 117.

But Root joined Broad and Co. in the attack and got Wade himself, as well as seeing his calls in the field - questioned earlier in the series - rewarded with good use of the other bowlers at his disposal.

Australia were struggling simply to see out the day and Root made catches from consecutive balls, giving England victory in their final match under Cricket World Cup-winning coach Trevor Bayliss.

The Ashes will go back to Australia but the series is drawn 2-2! pic.twitter.com/ixE513yBTw

The challenge was laid before the tourists after Tim Paine successfully reviewed a nick behind from Jofra Archer (3) and then Nathan Lyon got Jack Leach (9) to leave the big-hitting Broad (12) stranded.

Australia put on 18 for their best opening partnership of the series but Broad (4-62) intervened, uprooting Marcus Harris' (9) off stump and getting an edge to continue his hoodoo over David Warner (11).

England maintained control and Leach (4-49) and Jonny Bairstow combined to remove Marnus Labuschagne (14) before lunch, tempting the breakout Australia star out of his crease for the first stumping of the series.

It appeared for a time as though Smith would again prove resilient, yet he departed when attempting go round the corner from Broad and Stokes was on hand to make a two-handed grab, ending the outstanding batsman's run of 10 consecutive Ashes half-centuries.

England might have made further swift progress but for a number of near-misses bowling to Mitchell Marsh - including a no-ball dismissal when Chris Woakes overstepped - and a partnership of 63 with Wade saw Australia recover some ground.

But Root (2-26) sent himself into the attack and was quickly rewarded as Marsh pushed the England skipper to Buttler at short leg for a cheap wicket.

Root lost England's two reviews either side of tea when Jofra Archer was missing the wickets against Tim Paine and pitched outside leg to Wade, but then it was Australia's turn to waste an appeal.

Leach trapped Paine (21) in front and the delay in the umpire's call convinced the Australia skipper to unsuccessfully review.

A stunning catch to end the game!!

The Ashes series is drawn for the first time since 1972.

Wade saw off a gruelling final Archer spell and brought up a brilliant second century of the series, before he escaped when dropped by Stokes off Root.

England had their tails up and Broad was the man to do the damage again, attracting a faint edge from Pat Cummins (9).

Wade had reviewed well when adjudged to have been caught in the slips off Root - UltraEdge showing the ball bounced out of the rough without touching his bat - but the England captain outmanoeuvred Australia's main threat by teeing Bairstow up for another stumping.

Root's men had the momentum and the skipper took a simple catch from Nathan Lyon off Leach, before executing a trickier effort from Josh Hazlewood from the following ball to seal victory and the first drawn series since 1972.

With two wickets at the Oval, Warner became the batsman Broad has dismissed the most times (12) in Test cricket - with seven of those coming in this series. It concluded a miserable Ashes for the opener, even with Australia returning the urn, as his 11 represented just the second time he reached double figures.

Smith has been the star of this series, but his surprisingly early dismissal meant Australia were left searching for a new hero. They found one in Wade, who relied on equal parts skill and luck to get to 117, but he could not follow the example of Ben Stokes in the third Test by carrying his team home single-handedly.

MOMENT OF THE DAY
It was Broad's day, but it was fitting that Stokes, the star of England's only prior win of the series, should stoop to make a superb catch to remove the huge wicket of Smith.

- Australia had only once scored the required 399 or more in the fourth innings to win a Test match (against England at Headingley in 1948).
- Wade has scored multiple Test tons against a single opponent for the first time.
- Wade's 117 is his highest Test score and was the only century of this match.
- England have still not lost back-to-back home Tests since against South Africa in 2008.