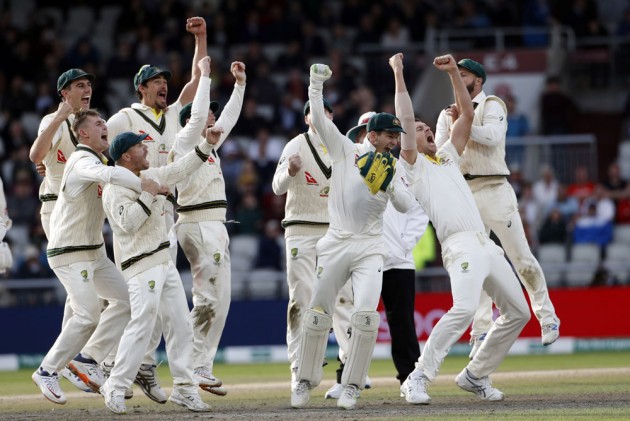 Josh Hazlewood struck the final blow as Australia beat battling England by 185 runs on a tense final day of the fourth Test at a raucous Old Trafford to retain the urn.

England resumed on Sunday in deep trouble on 18-2 and needing a highly improbable 383 to win, but more realistically to bat out for a draw which would give them the chance of a series victory with one match remaining at The Oval next week.

Watch: Hazlewood's Magical Delivery Against Buttler Which Sets Up The Aussie Win

The outstanding Pat Cummins (4-43) removed Jason Roy and Headingley hero Ben Stokes before lunch, but England had hope of saving the match when they were six wickets down at tea, with Joe Denly (53) one of only two men to depart in the afternoon session.

England continued to show resistance as Jos Buttler made 34 off 111 balls on his 29th birthday, while Craig Overton and Jack Leach also dug in with the backing of a packed crowd in Manchester.

Overton and Leach fended off 14 overs in a gritty ninth-wicket stand before part-time spinner Marnus Labuschagne got rid of his fellow tweaker - who soaked up 51 balls after being promoted above Stuart Broad - to silence a lively crowd.

Our Aussies come out on top in another gripping #Ashes contest! The urn has been retained, but a series win remains up for grabs at The Oval! #CmonAussiepic.twitter.com/XL9uP4xybV

After the clocked ticked into the final hour with 13.3 overs remaining, Hazlewood ended Overton's defiant knock of 21 off 105 deliveries to dismiss England for 197, sparking wild Australia celebrations as they avoided more final-day agony and took a 2-1 lead.