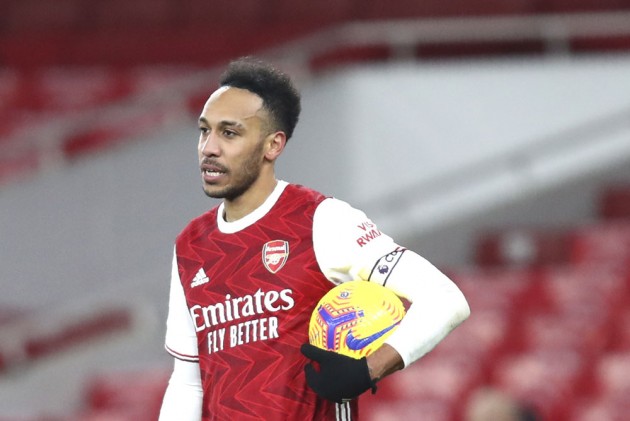 Making his first league start since January 18, Aubameyang put Arsenal 2-0 up by the 41st minute on Sunday and then rounded off his hat-trick early in the second half.

3 - Since the start of the 2009-10 season, Pierre-Emerick Aubameyang is one of only three players to score a hat-trick in three of the top five European leagues, along with Alexis Sánchez and Salomon Kalou. Continental. pic.twitter.com/5KV8aNYcRP

Patrick Bamford had the game's first meaningful attempt when he headed straight at Bernd Leno, but where the Leeds forward failed, Aubameyang showed no such profligacy.

Having been given space and time to square up Luke Ayling, Aubameyang dispatched a drilled finish into the bottom-left corner, though Illan Meslier could have done better.

Arsenal looked set to have the chance to double their lead when Liam Cooper bundled into Bukayo Saka in the box, only for referee Stuart Attwell to overturn his decision to award a penalty after checking the pitchside monitor.

Yet Leeds did not capitalise on their luck, Meslier getting himself into a tangle when he dallied on the ball and felled Saka, with Aubameyang slamming home from 12 yards.

It soon got worse for the visitors – Saka toying with their defence before Dani Ceballos slotted through for Bellerin to arrow in at Meslier's near post.

The contest appeared over two minutes after the restart when Aubameyang turned in Emile Smith Rowe's cross-shot to complete his hat-trick.

Struijk's fine header ruined Arsenal's clean sheet and when Costa thumped in Leeds had hope of an unlikely comeback.

Bamford had a penalty appeal turned down as Leeds rallied further but Marcelo Bielsa's team could not forge a memorable turnaround, with Aubameyang denied a fourth by the crossbar.

What does it mean? Gunners into the top 10

The reward for Arsenal is the fact they leapfrog above Leeds – who have now lost two of their last three games – and into the top 10, though there is still a five-point gap between Arteta’s team and the top six.

While defensive lapses will concern Arteta, he will be delighted with his team's attacking output, especially in the first half. Indeed, it was the first time Arsenal have led by three goals ahead at the interval of a Premier League since February 2018, when they were four up against Sam Allardyce’s Everton.

If there is one thing Aubameyang definitely loves it is goals and, after what has been a stop-start season for the 31-year-old, he delivered in some style.

While his first-half double took him to the 200 landmark in Europe's biggest leagues, he then became only the third player in Premier League history to score a hat-trick on Valentine's Day after Matt Le Tissier against Liverpool in 1994 and Michael Owen against Sheffield Wednesday in 1998.

After Hugo Lloris' errors in Tottenham's defeat to Manchester City on Saturday, it was another difficult game for a different French goalkeeper this time out. Meslier might have done better to prevent Aubameyang's opener and was at fault for the penalty before he then failed to keep out Bellerin’s strike at his near post.

- Arsenal scored four (or more) goals at the Emirates for the first time in the Premier League this season, having last done so in a 4-0 win over Norwich in July of last season.
- Leeds have won just one of their last 24 away league games in London (D6 L17), losing all four such matches this season by an aggregate 14-4 score.
- Leeds have conceded more penalty goals in the Premier League this season than any other side (seven).
- Aubameyang scored his 199th, 200th and 201st goals in Europe's big-five leagues in what was his 369th appearance across spells at Lille (2), St-Etienne (37), Monaco (2), Borussia Dortmund (98) and Arsenal (62). Since his Ligue 1 debut in 2009, he is one of just nine players to score 200+ goals across the five divisions.

Arsenal face Benfica in the Europa League on Thursday, in a tie which will be played in Rome due to coronavirus restrictions. Leeds visit Wolves in the league on Friday.