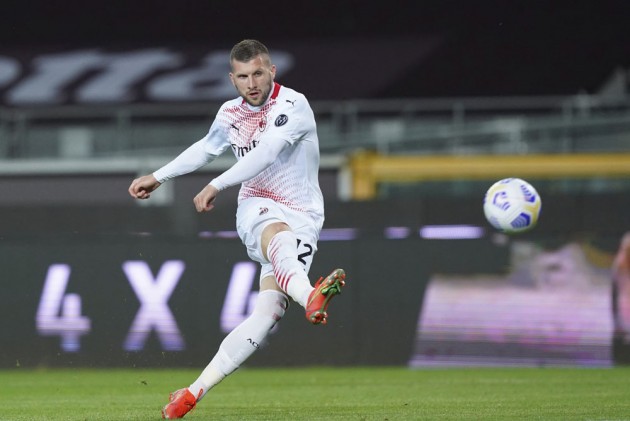 -Ante Rebic scored a quickfire second-half hat-trick as ruthless Milan took another stride towards securing a Champions League spot with a 7-0 Serie A thrashing of sorry Torino. (More Football News)

Stefano Pioli's side eased to an 3-0 win at fellow top-four hopefuls Juventus on Sunday and they enjoyed another hugely fruitful trip to Turin three days later.

Theo Hernandez opened the scoring with a venomous drive and Franck Kessie added a second from the penalty spot in the first half at the Stadio Olimpico Grande Torino.

Rampant Milan ran riot after the break, Brahim Diaz adding a third and Hernandez on target with another classy finish before Rebic rubbed salt into woeful Torino's wounds with a treble in the space of 12 minutes.

A third consecutive victory moved Milan above Napoli into third place and kept them three points clear of fifth-placed Juve – who won at Sassuolo – with two games to play.

Hernandez put the Rossoneri in front with a brilliant finish 19 minutes in, taking a pass from Brahim and drilling into the far corner of the net from the edge of the penalty area with his sweet left foot.

They did not have long to wait for the second goal, though, Kessie calmly sending Sirigu the wrong way from the spot to punish Lyanco for scything down Castillejo.

Milan were causing Torino all sorts of problems with their slick passing and movement, with Kessie turning provider early in the second half, intercepting Bremer's sloppy pass and casually slipping the ball inside for Brahim, who slotted home with his left foot.

Kessie somehow failed to convert from close range after Rebic set him up and Brahim almost had a fortuitous double when a whipped free-kick appear to strike his shoulder before hitting the crossbar.

Milan continued to cut the Torino defence apart and Hernandez dinked a delightful finish over Sirigu after racing onto a perfectly weighted pass from the excellent Rebic.

Rebic deservedly swept home a fifth with a clinical finish and struck again five minutes later with Torino all at sea, Rafael Leao racing away before showing the awareness to pick the Croatia forward out for a tap-in.

He then capitalised on more terrible defending from Torino to complete his hat-trick, finding the back of the net with his knee 11 minutes from time.

15 - #ACMilan have won 15 games away from home in Serie A this season, equalling the best tally in a single top-flight campaign level with Inter in 2006/07. Assault.#TorinoMilan #SerieA pic.twitter.com/GUR1eotwYn

What does it mean? Rampant Milan look Champions League-bound

Milan turned on the style in a magnificent performance after such a huge victory over Juve at the weekend.

Zlatan Ibrahimovic was certainly not missed as the Rossoneri scored six or more goals away from home in Serie A for the first time in 20 years, humiliating a Torino side who are not assured of their top-flight status for next season.

It was Milan's 15th victory on their travels in Serie A this season, equalling a record set by rivals Inter in the 2006-07 campaign and keeping Champions League qualification in their hands with two games to go as Juve and second-placed Atalanta also secured all three points.

Ibrahimovic was ruled out due to the knee injury he sustained in the victory over Juve, so Rebic came in for a first start since the loss at Lazio last month.

He could not have wished to make a bigger impact, scoring with all three of his attempts and also providing an assist.

Milan's success rate with Ibrahimovic on the pitch was 69 per cent compared to 38 per cent in his absence prior to this incredible demolition job.

Torino defender Bremer ought to have scored in the first half and his poor pass enabled Milan to go 3-0 up soon after the break.

A three-man Torino defence were all over the place and Bremer never looked comfortable.

6 - #ACMilan have scored 6+ goals in Serie A away from home for the first time since May 2001 v Internazionale and for the second time away against Torino in the competition (previously in 1951). Avalanche.#TorinoMilan #SerieA pic.twitter.com/qLkbuG39Jv

- Milan have won a Serie A match by a margin of seven or more goals for the first time since June 1959 v Udinese (7-0)
- Milan last scored seven or more goals in Serie A in May 1996 against Cremonese (7-1).
- The Rossoneri have taken 22 penalties this season in all competitions: the last side among the top five European Leagues to have more in a single campaign was Barcelona in 2015-16 (24).
- Franck Kessie is the third Milan midfielder involved in 15+ goals in a single Serie A season (11 goals and four assists) since Opta starting collecting this kind of data (2004-05), after Kaka in four campaigns and Hakan Calhanoglu in 2019-20.
- Ante Rebic is the first Milan player to score a hat-trick against Torino in Serie A since Carlos Bacca in August 2016.

Milan are at home to Cagliari on Sunday before facing Atalanta in a potentially huge clash on the final day. Torino must somehow regroup before travelling to a Spezia side who are just below them in the table on Saturday.